The 5 Most Popular Choices for Choosing Your First Tarot Deck 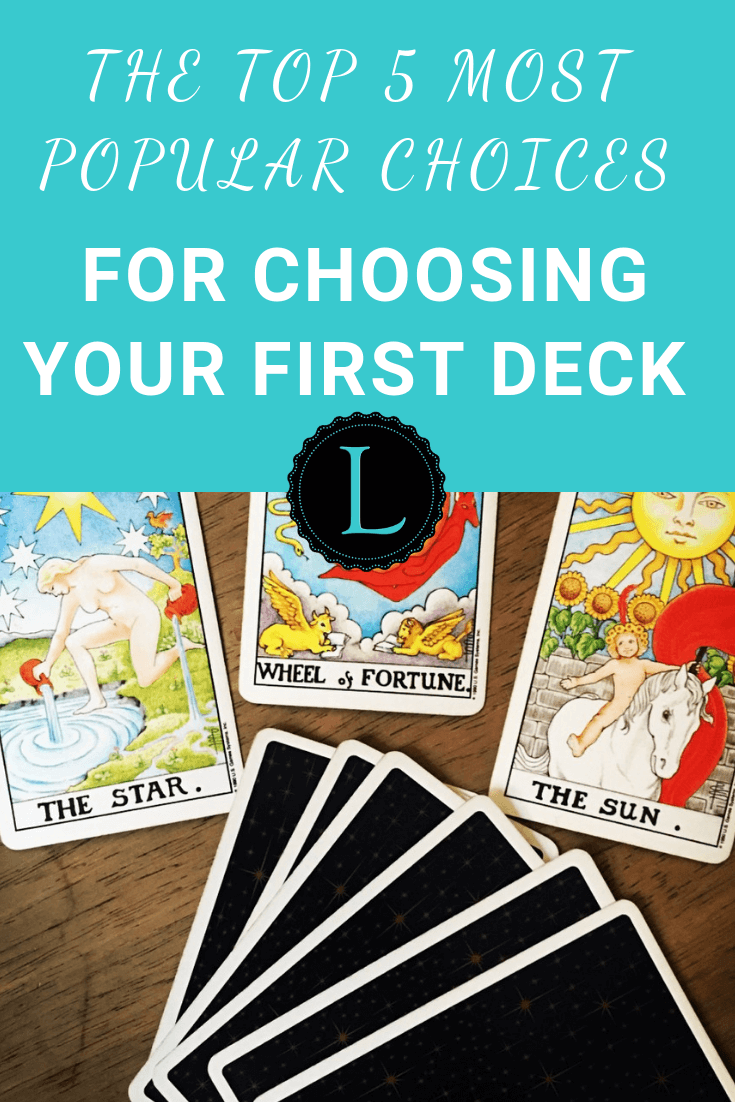 When you are learning to read the Tarot, the very first, and possibly only, thing you need is a good deck. A complete Tarot deck is comprised of 22 Major Arcana cards, as well as 56 Minor Arcanca, also known as "pip" cards. First, let's dispel the myth that your first deck needs to be given to you, or a gift.  I can't believe that one is still circulating, but like many myths, the roots go deep!  No, you do NOT need to be gifted your very first deck (if so, you could be waiting forever to be a reader!), and more so, it's probably most important that you pick a deck that you resonate well with.

Now with that being said, some people have been given decks by others; fellow readers, close friends, family that has passed them down, and they do wonderful with them, so I'm not saying you CAN'T be gifted a deck and do just fine, simply that it is absolutely NOT the necessity that this old myth says it is.

First you must decide what KIND of deck you want to read with.  In the advent of the popularity of Tarot in recent years, the industry has EXPLODED with new decks by the thousands.  One look on Aeclectic Tarot will yield you more decks than you could ever view to choose from.

***Important Note: We are NOT talking about other SYSTEMS of cards such as Lenormand, Kipper, Gypsy, Oracle, Angel or standard playing cards for divination. We are ONLY talking Tarot cards***

In the free guide below, I'll give you some picture examples of actual decks of each of the 5 types of decks I'm going to cover and my recommendations for each! Be sure to download it! Now let's get started covering the 5 main deck choices.

Most readers start with a standard Rider-Waite-Smith deck (RWS for short).  This is what I personally recommend to absolute beginners. Rider is the publisher, Arthur E. Waite the author or creator if you will, and Pamela Coleman Smith, the illustrator of the now infamous and most popular deck. You will sometimes hear of this deck being called the Rider Waite or the Waite Smith for short.

The most common versions of the RWS deck (aside from mini decks, collector decks, or decks in tins ect ect) are the Original, the Universal and the Radiant.  One main reason I recommend beginning with an RWS deck is that most LEARNING material features this deck so it makes learning a bit easier because the images directly match your cards.

Personally, I would not recommend the Original.  The coloring is very monochromatic, the lines are not sharp, and the detail is lost. The two newer versions, Universal and Radiant, are magnificent by comparison.  You cannot go wrong with either one. You can view them online (on Aeclectic Tarot) to see the differences in colors, as well as borders and card name/number placements.

There are also the decks in the Marseille tradition, which is a style of decks of French origin colored in the primary colors usually of red, blue and yellow and additionally sometimes green. Traditionally there are no images on the Minor Arcana cards (other than the suit and number of said suit items (for example, the 2 of Cups simply has the image of 2 cups) so there are no pictures to help you with interpretation. You must simply know the meaning of the card or create one by combining the element and number of the given card.

This requires you to either memorize the 56 pips, or be well versed in suit element and numerology to put together cohesive meanings. For this reason alone I do not recommend starting with a Marseille deck, unless you feel called to do so, or have one that has special significance to you.  However, there are some exciting exceptions to this style of pip cards that I show in the pictorial example guide!

The Thoth deck, but to be fair, this is not a type, but just one deck. There is no duplicate of the Thoth deck. Due to its popularity though with Tarot scholars, historians, professionals and readers however, it must be mentioned. I must say this deck is not for the faint, the imagery is quite bold and very heavy, and again like the Marseille, have no images on the minor, or pip, cards, so unless there is a special interest, it can be a little challenging to start with this deck.

It was conceptualized by renowned occultist Aleister Crowley, who has a very dark history himself.  As one reviewer put it, "looking at the complexity of the imagery of the Thoth deck was very much like looking into the sun. In my early Tarot days, I just wasn't ready for it yet." One interesting thing to note about the Thoth deck, Crowley included on each pip card the keyword that was assigned to each card by the Order of the Golden Dawn, to which both he and Waite belonged.

An RWS inspired deck, sometimes called an RWS clone.  The images are similar to that of the RWS deck but different in style. For example, Card 0, The Fool, always shows a fool or jester or a person starting off on a journey in some manner. The Two of Cups always shows two people together. Again with a click over to Aeclectic Tarot, you can find RWS style decks in any theme you like practically, from decks featuring cats, to fairies, to fairytales, to baseball, vampires and more. There are some lovely pagan themed decks that stay very close to the RWS traditional images as well that are quite popular, as well as some with more traditional pagan names but similar images.

Lastly, there are some other decks that don't closely follow the RWS system.  The card names may be similar or close but the images are quite different, and this presents a steep learning curve, your best resource would be the book that accompanies it if there is one. I don't mean the LWB (little white book) that accompanies all decks; some deck creators actually create books to go with their decks.

Otherwise, you either need to know the meaning of that card already, or understand the additional or slightly different meanings that creator had in mind for those cards.  Learning materials would not be as directly helpful. The other way to read of course is based off of your intuitive meaning of the card and images! Feel free to give this a whirl if you truly feel called to a particular deck, and are prepared for the learning curve you would be taking on. Some of these are the most beautiful decks!

So to recap, my personal recommendation for new students is a Universal or Radiant Rider Waite Smith deck, for no other reason than ease of learning. If you would like to get a non-RWS deck but want to get a clone that is very similar in imagery so that the learning curve is lessened, there are some very lovely close comparisons, such as the Connelly, the Morgan Greer and the Hanson Roberts.

The only real requirement for choosing your first deck is choosing one that you love. Choose one that the imagery speaks to you, that you want to look at every day. It is perfectly fine to choose a non-RWS deck, just be aware that you'll have a slight learning curve since the majority of learning material favors the RWS system at this time. If you truly feel called to the Marseille, Thoth or some other non-RWS  deck, you should absolutely follow that calling!  It is important that you seek out the necessary learning materials to accompany them to be successful.

As a final consideration, I would also make a note of the deck size. Tarot decks are generally larger than a deck of playing cards. They come in many different sizes.  If you have smaller hands, you may want to take dimensions into account as you are making your selection, to ensure you can shuffle with ease.

Most decks can be found on Amazon. Chances are you will find many a deck to love, happy choosing!


Your CHALLENGE: If you don't have a deck yet, start window shopping and make a list of the ones that really speak to you, then narrow it down to one. If you are already reading, tell us in the comments below, WHAT WAS YOUR FIRST DECK? How did you choose it?

Did you like this content and find it useful?  If so, please help us spread the word by spreading the (social) love! We'd LOVE it if you'd Like and Share below! Tweetable: "Finding your Perfect First Deck" 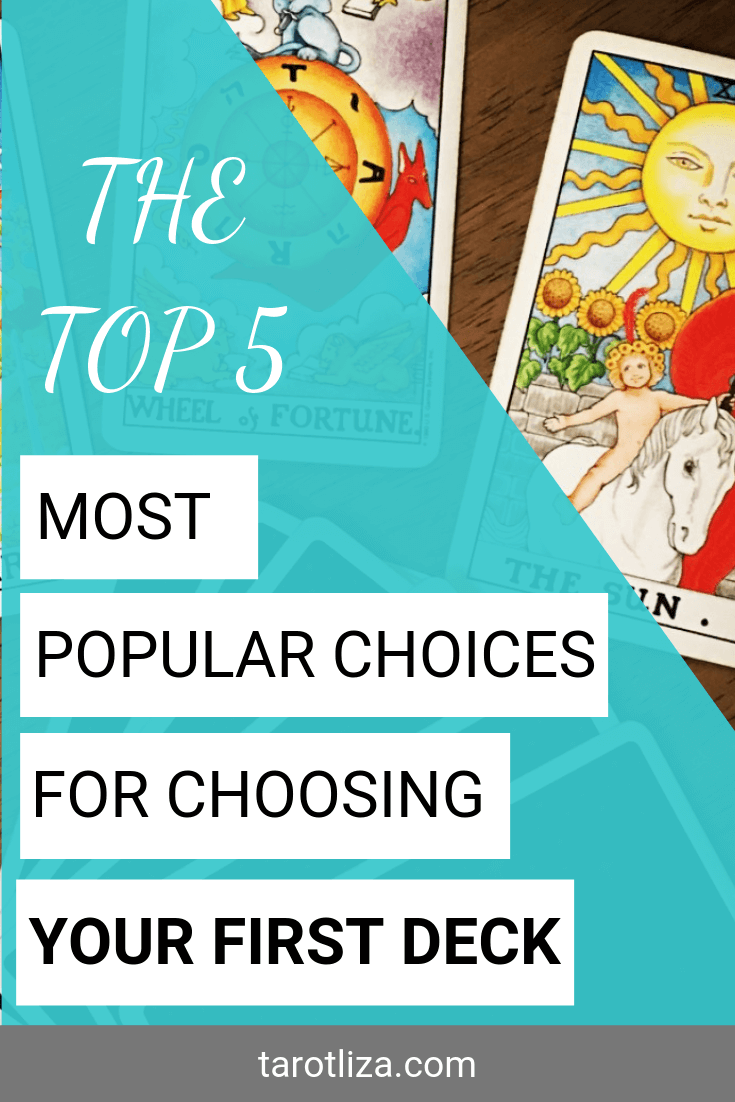 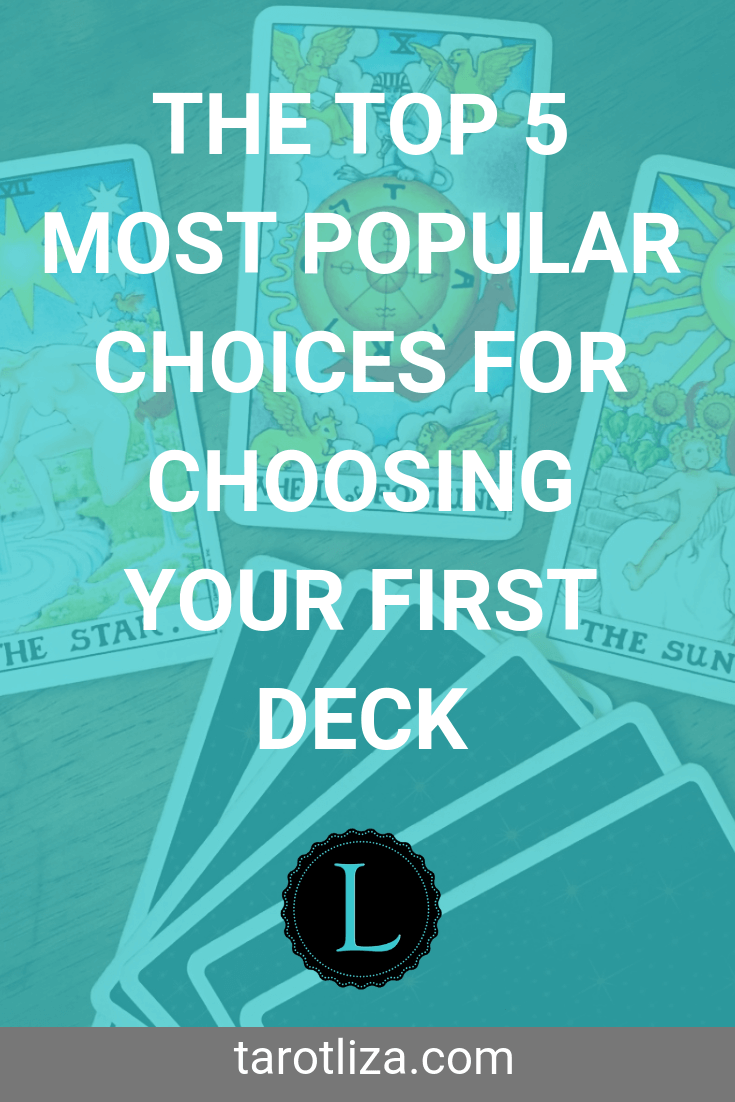 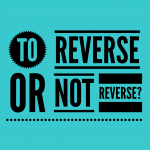 To Reverse or Not to Reverse?Blog