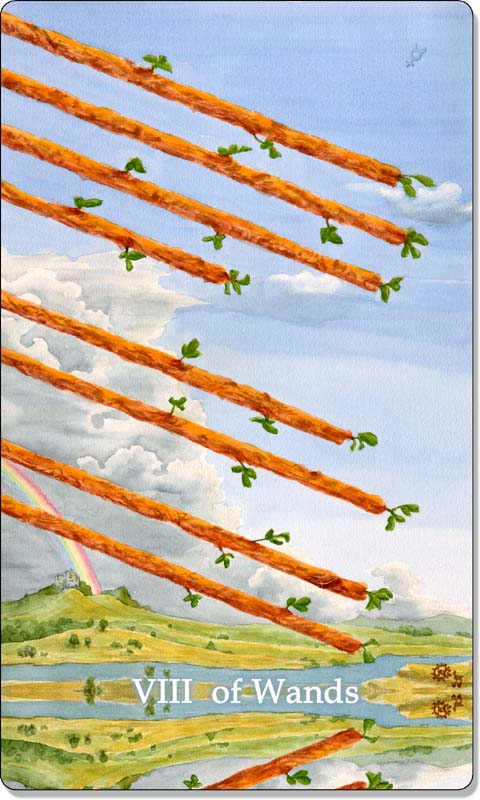 The card of the messenger. Many times when this card appears, a message is coming to you, and it can be in any of its speedy forms. This card is associated with Mercury so there is communication associated with this card. You could be receiving an email, a text or even a phone call with news. Watch out for signs around you as well, as they can be messages in and of themselves.

This card was also known as Swiftness, so all the things that are happening are happening FAST. This card is also associated with journeys, particularly travel by air, and anything else speedy, just like Mercury, the speedy little messenger planet. Think fast communications, the internet and quick growth, as these are Wands and Wands are about growth.

Everything is fast paced, as if on an adrenaline rush, such as your business dealings, communications, coming up with new ideas, putting plans into action, and interestingly enough, Falling In Love, as this card is also known for. The heady adrenaline filled rush that is associated with falling in love is also a fit for this card, and the arrows are befitting of Cupid, the winged God of Love. When this card shows up, there is speed, enthusiasm and forward movement. Obstacles are overcome quickly and easily, and this card bodes well for relationships. You are well on your way.

The Eight of Wands Reversed signifies delays. There could be delays specifically in your travel plans, such as a cancelled or missed flight, or in your relationships. Generally speaking there is an obstacle that you have not yet overcome, that you need to go back and address. In a relationship reading, this is something that is keeping you from moving forward as a couple and may be indicative of fighting and bickering. There could be jealousy, or falling out of love.

Otherwise, in a general sense, you are not in a position to swiftly move forward with your plan until you have satisfactorily ironed out all of the kinks that came before. You will only be able to move forward, when you have created the circumstances that are truly right for such. You are being met with difficulties; these could be a result of actions that were too hasty, or plans attempted to be put into motion before they were ready. The members of your team may not be in agreement as to how to move forward, as all of the arrows are no longer speeding together toward a target, but appear to be merely shooting off into the clouds.