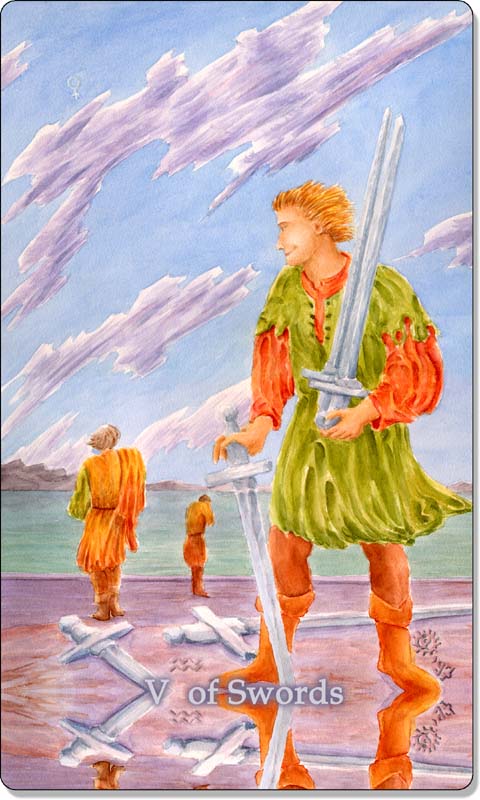 In the Five of Swords, there is one man in the foreground holding three swords with a rather smug look on his face. In the background we see two men turned away; neither is holding a sword, though there are two lying on the ground at their feet. Does the man up front hold his own sword, plus theirs? Why do they not pick up the others? Are they so defeated that they do not even wish to try? The background shows a dark sky with angry gray clouds overhead moving through. The Golden Dawn keyword for this card is "Defeat".

When this card comes up, you must ask yourself, are you the person in the foreground, or are you one of the people in the background? Truthfully, there is no good answer, as this is one of those situations where there are no winners, only losers. A common phrase for this card is that the man up front has won, but at what cost? If you feel that you came out "on top" in the situation, what did you have to do to get there? Who did you have to step on, or cut out, or knock down so to speak?

Sometimes this card comes up to represent an argument between two people in a relationship. Regardless of who is who, the implication is that the "winner" of the argument may have had the best insults, or feel like they won the fight, but, if both people are still feeling sad, hurt and lonely, how is that winning?  One person may have made the best case, and even got the last word in, but if you deeply hurt the one you love in the process, that's hardly a "win".

Is what you are fighting for really worth it? Sometimes you don't even really care about the cause you are pursuing, at this point, it's just about being right. Maybe someone has pushed your buttons on a hot topic and you just don't want to let them off the hook, or, you don't want to give them the satisfaction of saying "I told you so". If you know that what you are saying and doing really isn't that important to you in the grand scheme of things, do what you can to be the bigger person. Your karma will thank you. As hard as it can be to let go of the self-righteousness sometimes, it's surprising to find out how good it can actually feel to say "I'm sorry for my part" and be the bigger person! You don't necessarily have to admit fault or take all the blame, it can be enough to just apologize for any part you had to play in the misunderstanding and see where it goes from there. A little goes along way, and you would be surprised the way just a few kind words can disarm another and lead to a resolution.

Smugness and righteousness are never attractive qualities. Just because you were able to win this battle does not mean you have won the war. More likely, you have alienated yourself, and people will not want to be around you, team up with you, or feel like they can count on you. You will have lost their trust and often they feel betrayed. You will have lost their respect, and those things are extremely hard to get back, once taken away.

If you are one of the persons in the background, you may be struggling with someone like this. The best you can do is continue to be your best self. Put out what you would like to get back, from a bit of a protected distance that is. Don't be quick to say "I told you so". Particularly if this is someone you care about, it can be really hard on all sides, so put out the vibe that you are open to reconciliation.

Pick your battles wisely. Fighting should be your last alternative. It could be that the two "defeated" men laid down their weapons (indicated by the two available swords on the ground), because they knew the battle, and the person waging it, was not worth it. That is an even more defeated feeling, and it becomes the person in the foreground who is really defeated, feeling as if you weren't even worth someone's time and attention to engage with. 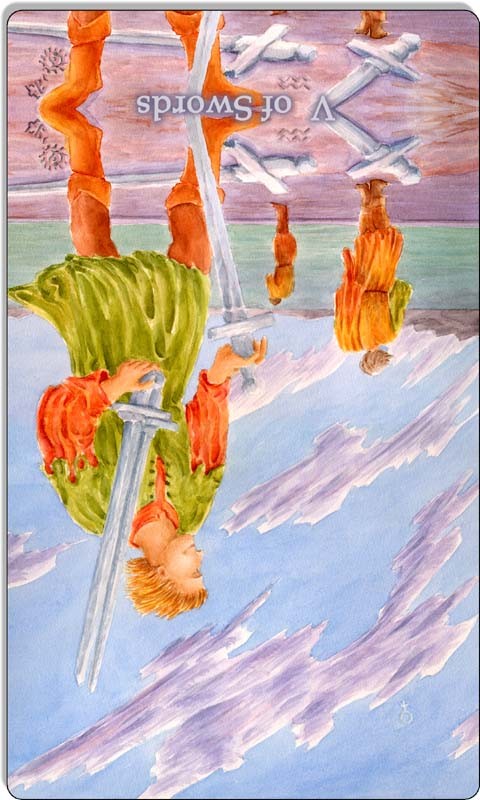 The Five of Swords Reversed carries a friendlier message than the upright. It connotes the laying down of arms. You recognize the no-win situation you were in, and are ready to initiate, or at least be receptive, to open communication. A reconciliation is being considered. One person does not need to take all of the blame in the scenario, but peace talks are underway, or will be soon, when this card appears reversed. There is value in knowing when to fight, and when not to. If you see yourself as the man in the foreground, it could be that you recognize that winning the fight is not worth the cost of what you will be losing in the process. You just want it to be over, who was right, and who was wrong, are not as important to you as the long-term viability and success of the project or relationship at the center of this mess.

This could be the time after the fight, where you are assessing what has happened, and possibly doing damage control. Did you say things that you regret and wish you could take back? Just do the best you can to make repairs now. Again, you don't have to take all of the blame in order to start things on the right path. Just express a sincere desire to restore peace and find resolutions, and apologize for anything you believe you truly do owe an apology for. You can start things on the road to recovery.

You may be realizing that you were fighting for the wrong cause, or that your fighting was directed at the wrong person. You could even be seeing your own fault in the situation and recognizing that it was easier to project that onto someone else or take the attention off of yourself by pointing out another's flaws. This is a good time to retreat to the safely and sanctuary promised in the Four. Take some time to recuperate and reflect. Don't be afraid to ask for the help of a mediator, or a neutral third party to assist you in coming to common ground.