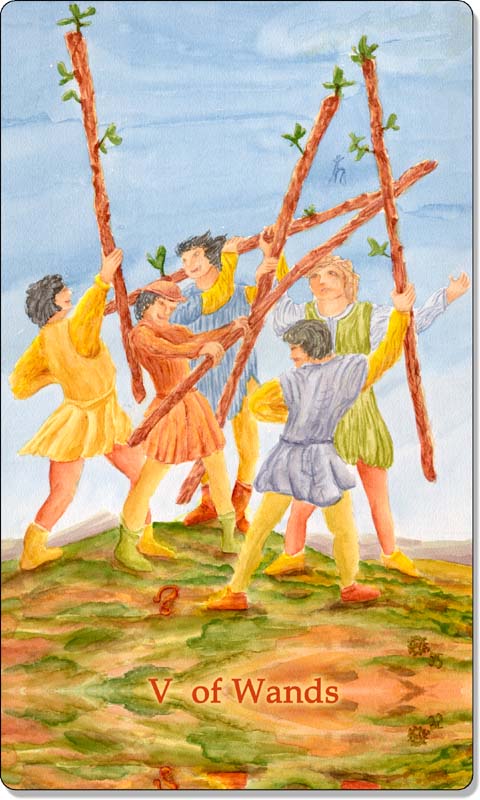 Conflict and strife are imminent. This is not the kind of knock down drag out fight that starts wars. This is different opinions, many people all having a different viewpoint and trying to be heard. No one person's voice stands above the crowd because everyone is talking at once trying to get their point across.

This can denote power struggles, where each person believes they have the correct answer, or the "best way" to approach the situation or handle the problem. People are working at cross-purposes to each other, in pursuit of their own individual goals, rather than working together towards a common goal.

This is a very competitive atmosphere. People are not trying to actually cause damage to one another; they just can't seem to see past their own pursuits to work together as a team until other avenues have failed. You may be a part of this team, or you may be trying to pursue too many things at once and cannot give proper time and attention to any, or cannot be competitive enough in any one pursuit. Streamline.

In a group setting, work to bring all of the ideas to the fore, list all that everyone has offered, and try to be a peacemaker or mediator, working to counsel the group to pick one idea that most people can agree on, and all channel your energy constructively into that one avenue. 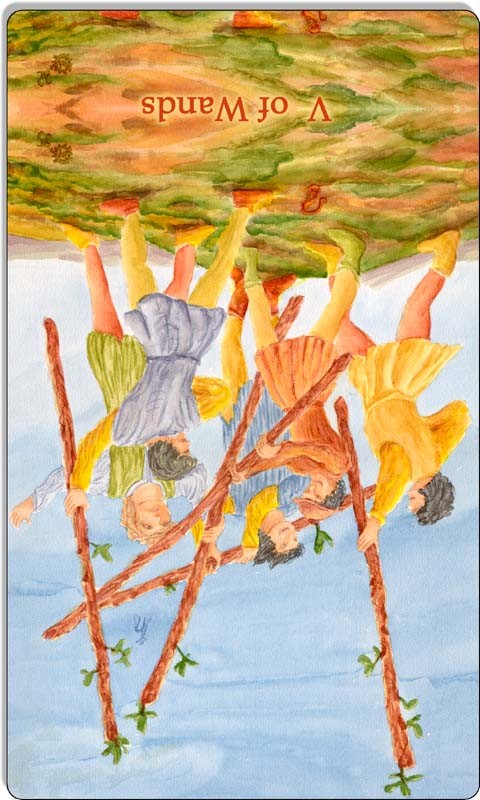 All fives in the Tarot represent Change, and are typically a difficult energy to have to deal with. The nice thing about a reversed five is that it is typically more welcome than the upright. In the five of Wands reversed, we see a potential end to the conflict. In the upright, no one could agree, mainly because they could not even hear each other, and everyone's Wand was pointing in a different direction. Their own direction. In the reversal, we see that the people's legs are all reaching up now, and they are not only all going in the same direction, but they are reaching for the sky, all reaching for that one highest goal.

You are learning to work together as team and to hear each other's ideas, and consider how to incorporate each other's thoughts and ideas into one cohesive productive plan. People realize that compromises must be made in order for goals to be reached. Everyone is lowering their weapon and willing to listen and talk it out until a fair consensus that all can agree on has been reached.