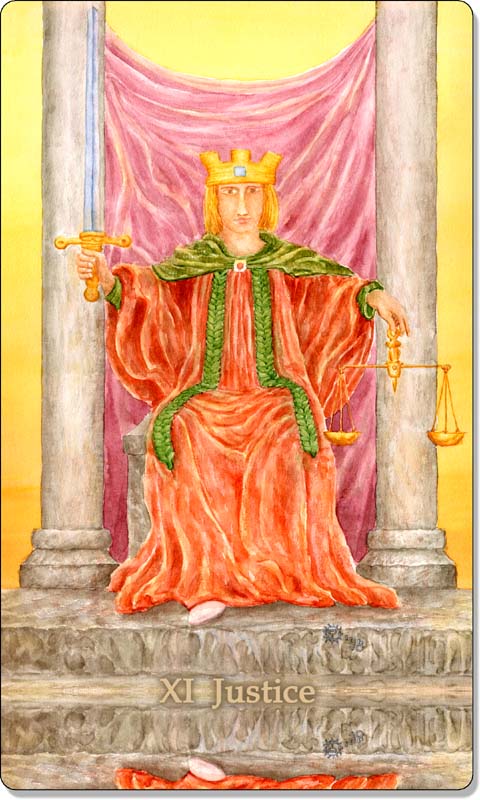 Justice will prevail. Now is the time that you will be made aware of certain rights and wrongs that have been made by you or someone else…both good or bad. This is the time that we are called to account for our actions. There is much fairness at play, meaning that if you have done all of the right things in a fair and just way, then you are in good shape! In the alternative, be on the lookout should you have led someone astray, it may come back to you in a not-so-good manner.

Things are working out the way they are meant to work out based on situations and decisions you have made in the past. If you know you have done the right things, then you will reap the benefits. If you know that you were dishonest or unfair, well, you will reap those returns as well. It could be a warning that the choices and decisions you are making right now will be the ones that future justices (or injustices) are based on. Always remember, we reap what we sow.

This card represents Libra and the law. There could be a court battle you are fighting, rest assured with Justice upright, the fairest decision will be rendered. Keep in mind, that does not always mean it will be in your favor, however you probably already know that. As a person, this refers to a lawyer, a judge or anyone else who works in the legal system, or who holds a position of authority where balance must be maintained. Libra, the sign of partnership, and consequently Justice, are about fairness and equality, hence the scales.

This could be a positive sign for your relationship, showing that you are indeed treating each other fairly like partners, or when you add to that the fact that it is the sign of the law, it could be about legalizing your partnership, say, as a simple ceremony at the courthouse. I would look for other cards of relating or partnership to support this. On a very basic level, this card can indicate the presence of, or the need for balance in your life depending on where it falls in the spread. You can look at the cards on either side of the Justice card for clues as to what this is referring to.

<The Wheel of Fortune 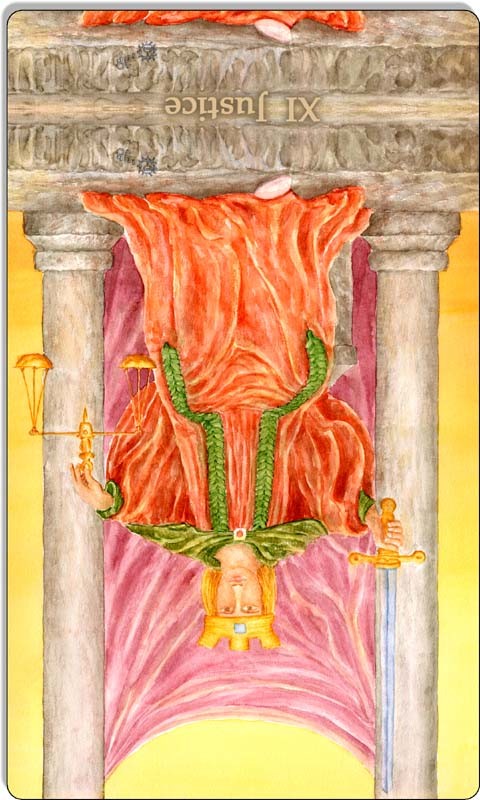 This could be a time that injustice is served. There may be an issue where you feel you were handed a raw deal or something didn't play out fairly. It may be you that has served an injustice to another. I hope that is not the case, as many times, in an ironic twist of fate, karma has a way of serving up poetic justice when the traditional means have failed.

You must also be certain that the justice you were looking for was truly deserved, and not just something that you really wanted to have happen "at any cost", for your own reasons. Right now there could be a total disregard for the Justice system, or a disregard for any of the meaningful facts of a situation. Legal situations could be complicated and inaccurate, regardless of whether there is a win or a loss. Do your best to be as fair as possible in all of your dealings. Don't get caught up in vigilante justice, whereby you take action into your own hands if you feel the legal system has failed you.

If it is you who has done the wrong thing, it is never too late to do the right thing, or at least to the greatest extent possible at this point. Take responsibility for your actions. Face the consequences. Save your soul the lesson in the next lifetime, and spare someone else the agony of injustice.

On another note, you could simply be struggling due to a major imbalance in your life right now. Something could have your scales completely tipped hard in one direction, whether it's a job that is forcing mandatory overtime this month at the expense of your family, or even a health condition such as an imbalance of something in the body. Remember that the wheel of change continues to spin for all of us. If you feel that you are at a low point, ask yourself what changes you can make right now to start taking yourself to a better position.