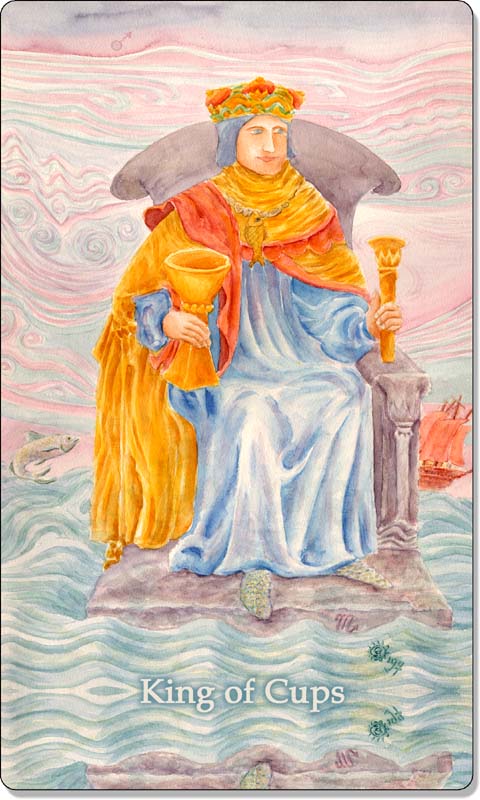 When a court card shows up in a reading, we need to determine if it represents another person, or an aspect of ourselves. It can indicate how we are acting or feeling in a given situation, or suggest a personality to emulate.  Sometimes it's a quality we project onto others, and occasionally, they represent situations. However, I typically find that it represents either someone else involved in the situation, or some aspect of the querent.

Kings typically represent the "mature masculine" of the court cards. Like Queens, they have reached a higher level of mastery, they are no longer learning as much as they are teaching.  They manifest the qualities of their suit in a very outward manner. They are usually teaching or leading by example in their respective suits.  They are the fathers, leaders, bosses, and rulers. They have been given power and authority because they have earned it and know how to use it. Their long gowns connote wisdom, respect, authority and tenure. Also to note, the qualities of each king can just as easily be seen in a female querent, they are not gender specific. Kings are responsible for leading their people, so as they represent mastery and success, they also represent social responsibility.

In the King of Cups we see a man sitting on his stone throne, set totally adrift at sea, surrounded by water on all sides. He wears a long blue gown with a robe of gold.  He wears a very ornate crown as well as a necklace with a fish, said to represent both his spirituality and creativity, and the symbol for Pisces. In one hand he holds a single cup, in the other a scepter, a symbol of power for a King, much like a staff. We see both a fish and a ship in the turbulent waters behind him, symbols that although things are not always smooth, this King is the mature expression of his suit and he can handle them.

This king represents the Suit of Cups and therefore the suit of emotions.  He is said to be the emotionally mature expression of the Cups court cards.  As a man, this king is generous, kind, loving and loyal.  He gives with an open heart and a true desire to help.  When offering his services, opinions, or shoulder, it is out of a true desire to help improve your situation.  There is no personal gain with this king. As he is associated with the sign of spirituality, it could also indicate a man with a strong sense of faith, whether it be to a particular religion, or just a spiritual nature in general.

If we were to envision him as a particular person, or a person with a particular role, he would be the loving father that is always there with words of encouragement or a helping hand.  He may also be the boss that takes the time to actually listen to his employee's needs or ideas, and thoughtfully considers their input as valuable, as well as looks for ways to improve the happiness of his team. He knows that the best employees are happy employees that feel valued and cared about, and indeed, he does care.

He is a counselor, whether it be a spiritual counselor or a relationship counselor, he listens attentively, and gives good advice.  After all, he is the King of Cups, so he has demonstrated a mastery (king) of the realm of the suit he governs (emotions) and is able to lead and instruct others. He could also be your spiritual leader; he is interested in both theology and philosophy. He is also a doctor, again, because he provides care to others, but this is the one with the best bedside manner!  He is also a businessman, which may at first come as a surprise, however both Cancers and Scorpios are known to be EXCELLENT in business (cancers for their frugal economizing nature, and Scorpios for their shrewdness) and this king rules both. Never overlook the King of Cups as a strong businessman!

If you have approached the cards about a specific creative or artistic pursuit, this card is a great omen.  As he is the leader who shows mastery, and the final expression of the suit, seeing the King of Cups in response to such a question implies that you too have achieved mastery in your craft.  You have reached success and a great achievement; you should consider yourself an authority at your chosen work.  You will be regarded by others as such. Depending on how or what you asked, when referring to someone else in the same context, this card would indicate seeking out a mentor, or someone who excels and has displayed mastery in the field you are inquiring about.

Many times this card may indicate you in a situation.  You are able to show great emotional strength or restraint.  This does not mean that you are unfeeling, but that you have reached a point where your emotions do not control you.  You are able to feel how you feel in a situation, but act from a place of consideration, meaning you have considered what you want to convey, and have done so accordingly, without RE-acting from a place of emotional upset. You are emotionally stable.  If this card comes up in the advice position, it is suggesting this personality to emulate. It may be that you are being emotionally challenged and this card serves as a reminder to not let yourself get carried away by sudden emotional upsets.  Return to your sense of emotional intelligence and seek to act, not react. This king favors trusting your emotional instincts.

You are able to help others during their own times of crisis by being a calm, loving, comforting shoulder for them.  You may not be a therapist, but it could suggest you are a good listener or just a good friend.  Again if this card comes up in the advice position, it could be suggesting the need to be this emotional support for another person.

Generally, you, or the person this card represents, are good at showing the necessary emotions in relationships.  As a father you are loving and nurturing, and as a partner, you are kind, loving and supportive.  You think of others needs, and show consideration for others needs and wants as well.

As the ruler of the water signs, the King of Cups makes his appearance as a Cancer by being a loving nurturing parent, partner, friend or just a good listener.  As a Scorpio, is he quite the shrewd businessman, and can have a bit of an air for secrecy or protecting his feelings. In Pisces we see the powerhouse of creativity and spirituality really blossom and fully manifest. 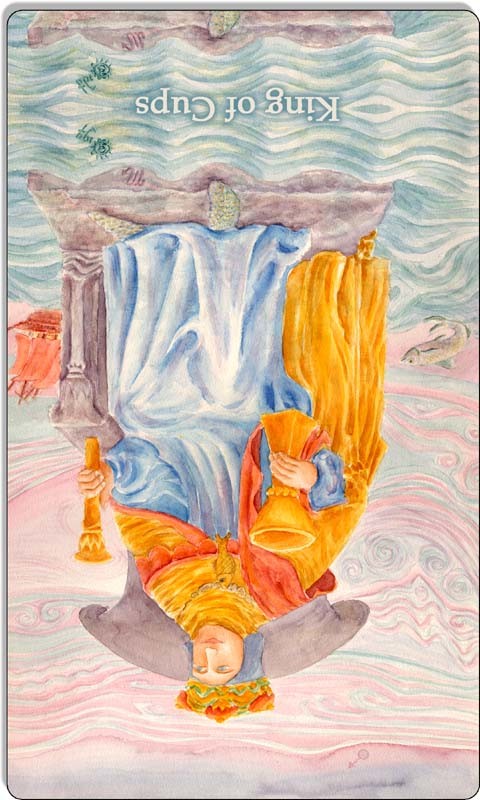 Many times when the King of Cups comes up reversed, we see emotions that are out of control, in one of many ways.  This can manifest either passively, or aggressively, but either way, you, or the person this card represents, is no longer emotionally stable, or in good control of their emotions.

First, this can be someone that is too over-emotional.  You may be letting things get to you, and get you down, more than you should.  You are having difficulty maintaining resiliency, and it is becoming very hard to let things just "roll off".  You find yourself increasingly upset in the situation. This could be because a situation is not resolving and you are losing your ability to cope with it and you are breaking down, or because in general, you have not learned how to successfully think, feel and ACT, rather than RE-act. You need to work on gaining a little more emotional self-control, and deciding what is right for you and what you want so you can then act accordingly.

On the other hand, this can represent someone emotionally controlling and manipulative.  Someone may be using emotions to control or hurt others.  You, or someone around you, is taking advantage of someone else's emotions, and using them to their advantage, or this person just has no control over their emotions, and you are frequently the victim of their emotional outbursts. This is representative of a toxic relationship, someone that makes you feel badly, or feel that things are your fault, even when they are not.  Eventually you may even begin to doubt yourself, and possibly even sink into depression due to how this person makes you feel, making it even less likely for you to make a change for the better.

Or possibly, you are just not in control of your emotions, and you are lashing out vengefully at others who you perceive have hurt you. Someone could be doing this to you.  This person could also simply be whiny and a sulker, when things don't go their way, or just emotionally immature.

You could be fearful of putting yourself out there emotionally and getting hurt, or maybe you have been hurt in the past, and now you are closing yourself off, and pushing others away.  It could be that you view this as being weak, or ineffectual as a man, and therefore feel the need to act macho instead.

In the signs, the King of Cups appears as a Cancer by being moody, sulky and holding on to part hurts.  A hurt cancer will not forget something you said or did decades ago that hurt them and may still be harboring that pain.  As a Scorpio, all of the elements of emotional manipulation, vengeful behavior, and control come out, the hurt Scorpio will not hesitate to whip out its stinger and lash back in attempt to hurt you the way you have possibly hurt them.  In Pisces, you are withdrawn, and have lost your spirituality, or are facing creative blocks and difficulties.