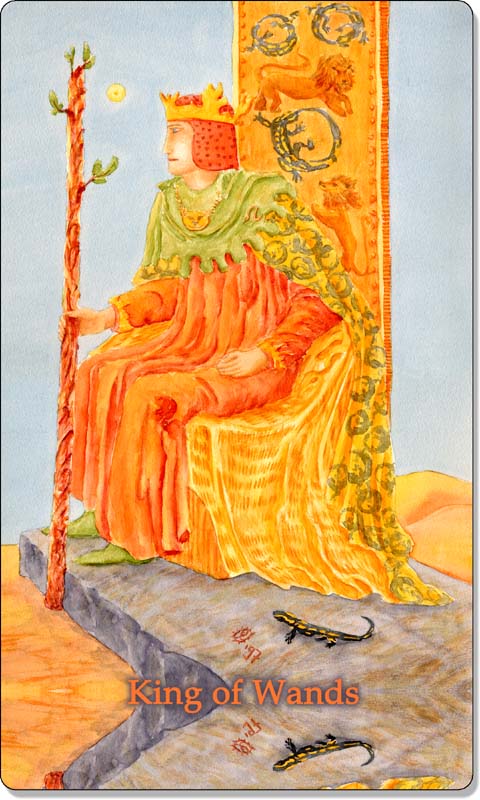 When a court card shows up in a reading, we need to determine if it represents another person, or an aspect of ourselves. It can indicate how we are acting or feeling in a given situation, or suggest a personality to emulate.  Sometimes it's a quality we project onto others, and occasionally, they represent situations. However, I typically find that it represents either someone else involved in the situation, or some aspect of the querent.

Kings typically represent the "mature masculine" of the court cards. Like Queens, they have reached a higher level of mastery, they are no longer learning as much as they are teaching.  They manifest the qualities of their suit in a very outward manner. They are usually teaching or leading by example in their respective suits.  They are the fathers, leaders, bosses, and rulers. They have been given power and authority because they have earned it and know how to use it. Their long gowns connote wisdom, respect, authority and tenure. Also to note, the qualities of each king can just as easily be seen in a female querent, they are not gender specific. Kings are responsible for leading their people, so as they represent mastery and success, they also represent social responsibility.

In the King of Wands, we see a man dressed in a long orange gown, with fiery red hair, a necklace with a lion's face, the symbol of the fire sign Leo, and symbolic of possessing inner strength, and a crown that appears to have flames coming off of it.  On his throne are several more lions, and on both his throne and his robe, is the ouroboros, an ancient symbol of a dragon or serpent biting its tail in its most complete form. On the Page and Knight, the circle is not complete.  The symbol stands for something constantly re-creating itself or cycles beginning anew as soon as the old one ends.  On the ground at his feet is a salamander, another symbol for renewal, regeneration, rebirth, and growth. This is because the salamanders tail will re-grow if bit off or lost in a fight. In his hand he holds a large single Wand as his staff.

The King of Wands is a fair and righteous man, and much like the Strength card he is associated with, he leads and takes charge by the strength of his will.  He is a leader for a reason.  He knows what is best and knows that he is making decisions based off of that.  He expects others to follow him, and they do, because they know this as well. He is very confident. He is a fair man, and like the Queen of Wands, has no reason to lie.  He believes wholeheartedly in himself and abilities, and doing what is right. He is very compassionate, and truly believes in building others up and creating something great for everyone.  He knows that like the Strength card, he can empower others to take action when they believe it too.

He is still a representation of the Suit of Wands, so he is eager, opportunistic in a good way, and feels that if he can get out there and do something, anyone else can as well.  He is about the doing, not the thinking, talking about, or planning. This can be a bit of a challenge, as a King is usually known for sitting and being available to his subjects.  While the King of Wands is a good king, his internal nature and temperament are a little jumpy and eager for the stillness required by the title of King.

In everyday situations, this card indicates someone who is getting ahead by taking on a confident attitude and/or a leadership role.  Double points if it's in a creative field or you are tackling a new creative project.  You are establishing yourself as a leader in your field, because you show mastery in your subject, and are willing to put yourself out there and assert yourself.

This represents a person who is self-directed, so much like the Aries sign he is associated with, he makes a great sales man, not because he is pushy (though he has to be careful not to be), but because he is a real go-getter and will tackle new challenges without being told. He is quite goal oriented.

This is also the card for the visionary or the entrepreneur.  For someone who wants to leave the 9-5 and be their own boss or start their own business, this is a wonderful card to see.  This card represents having an idea, and being able to see a future in it, then being able to go after it and turn it into something.  It represents having the self-directedness, determination and perseverance to will it into existence with hard work.  This is because the King of Wands believes so much in the business and the outcome he is envisioning, he is able to expend the personal internal resources to make it happen.

As an Aries, he is daring and adventurous, a real self-starter, and go-getter.  When representing the sign of Leo, we see that he leads through the strength of his will, others follow him not because they are forced to, but because they are compelled to, much like the Lion in the Strength card.  As a Sagittarius, he is optimistic, and wants to create a greater life for those who follow his lead, this is also what makes him a visionary. 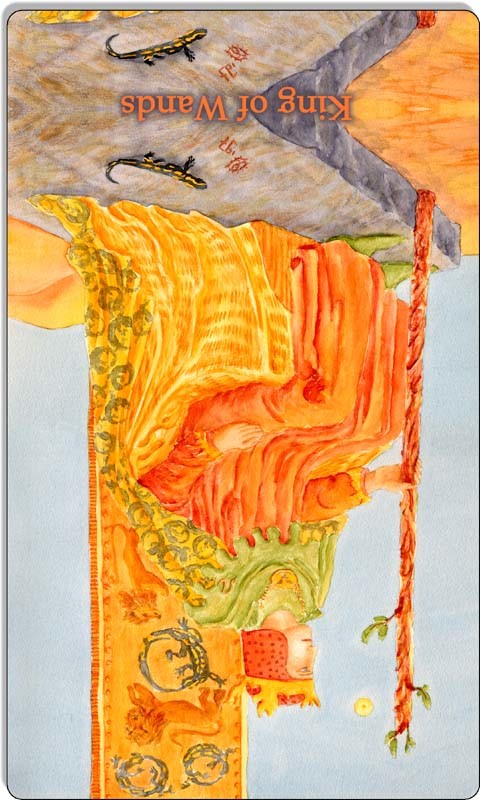 In the King of Wands Reversed, confidence turns to arrogance.  The King of Wands can become self-righteous, believing that he is right in any situation, and that others should simply follow him, he has a grandeous sense of self.

He becomes an egotistical dictator, and people do not follow by choice, but by force, if at all. His arrogance makes him blind to his faults.  He has an issue with power and control, and tries to use it over others.  You may be trying to one-up someone, or simply be acting like a bully. Many times it is when control is being lost, or one feels they have no control, that they try to exert or force control. Again, the best leader is exemplified in the one that people choose to follow willingly.  This King's vanity makes him blind to his shortcomings.

In everyday terms, the King of Wands can indicate a lack of commitment or a lack of self-discipline.  You are not mature enough to handle the decisions you are making properly or to see them clearly.  You could be acting rashly, or not planning for the long haul, there is no long term vision.  You may need to pace yourself, your plan, and your resources.

This card could also indicate you are hitting low reserves of energy as far as your health is concerned.  This card is associated with the life-giving vitality of the Sun, and when reversed, it shows that your vitality too, is low.  This could be in a literal sense, an indication of your health, or it could be in relation to a project you are working on, or a relationship.  You are nearing empty.

As  Leader, you could be missing the effectiveness mark by being  at one end of the spectrum or the other, it could be that you are too aggressive and power-hungry, or it could be that you are having difficulty stepping up to the role of being a leader, you are weak or ineffectual. You have a hard time letting your bright light shine for others to follow. It's possible you reject or turn down your role as a leader, or one offered to you, because you don't believe you have the necessary mastery or knowledge to lead others in your chosen field.

As a representation of the Fire signs, the reversed King of Wands as an Aires is bossy, temperamental, arrogant, rash, dictorial and hot headed.  As a Leo, he could be a show-off, or power hungry, vying for control and power through force or coercion, and as a Sagittarius, he becomes pessimistic, and no longer believes in himself or the greater good.