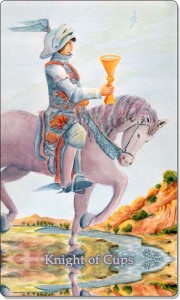 When a court card shows up in a reading, we need to determine if it represents another person, or an aspect of ourselves, such as how you are acting in the current situation, or a good personality to emulate, to get you to where you would like to go. It can also represent situations, so in the case of a Knight, it may be a journey or a trip of some sort. The Knights are the movers and shakers of the group. It's been said that the Knights were supposed to be a part of the deck of playing cards, along with the Jacks (Pages), Queens and Kings, but they were always so busy and out on an adventure and were not there to be counted the day they lined everyone up!

The Knight of Cups is the Knight in Shining Armor, Don Juan, Cassanova, you get the picture. He is the Knight on a white horse who will "court" you. He brings a message of love! The Suit of Cups is associated with the element of water, and like water, it's represents the fluidity of emotions. In this card, the river of love and emotion flows freely! If you have approached the cards with a matter of relationship, then this card is advising you that this one is a keeper, his intentions are true.

He is a romantic dreamer. This Knight loves to love and holds one large Cup, filled with love that he is ready to offer. If this is not in regard to relationship, it could indicate forward movement on a creative project that you are emotionally attached to, your creative baby. Lover or not, he is still a Knight which means a journey or a quest. You could be on a spiritual quest or you could actively be on the lookout for love, a romantic quest. If this card comes up in the future position, then keep your eyes open, Prince Charming may be right around the next corner! 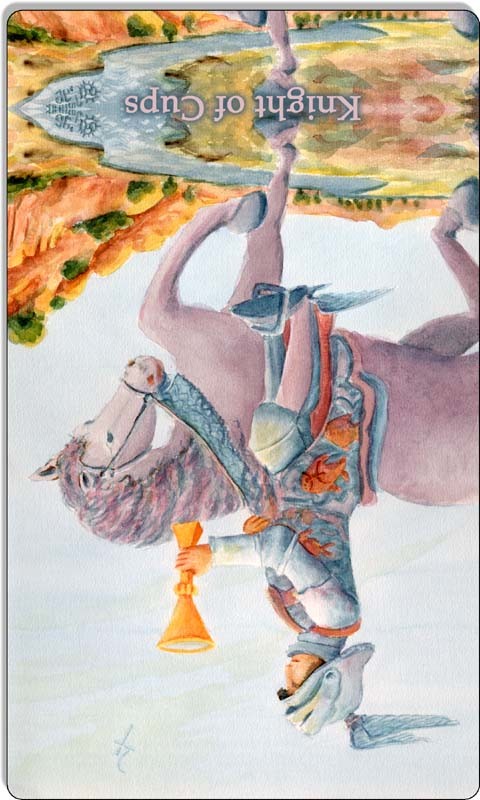 In the reversed Knight of Cups, we see love gone wrong. This can be pining for someone who does not return your affections. You could be wasting your time and other opportunities waiting for someone who does not love you. It could be that they do not love you enough. Do not waste your time waiting on someone who has to leave someone else first, or have some other situation worked out before they can be with you. You want to be with someone who is "All In" over you. When you say yes to one thing, other paths naturally close. Don't waste your "yes", or close off other paths for anything less than what you want and what you deserve in return.

This Knight could be using love, that is, manipulating someone else, because they have feelings for him, to get what he wants. There could be deceitful or duplicitous behavior, someone could be playing you, or it could possibly be an indicator of infidelity, however I would look for other cards indicating this such as the Seven of Swords or the Three of Cups Reversed. Keep in mind, this could be either a man or a woman, and it could be you, or someone in your life. You could be with someone, or it could be you, that has been hurt in the past, and is afraid to open up and take a chance.

It could also indicate someone who is not able, or ready to share their feelings. It could be someone who has gotten hurt one too many times and is now guarded, it could be someone who is extremely shy and while they may be interested, do not have the courage to make a move. It could be a secret affair, or the old texts state that it can even be an indication of homosexuality, as there was once a time that this was very "secretive", though that is not so much the case anymore.