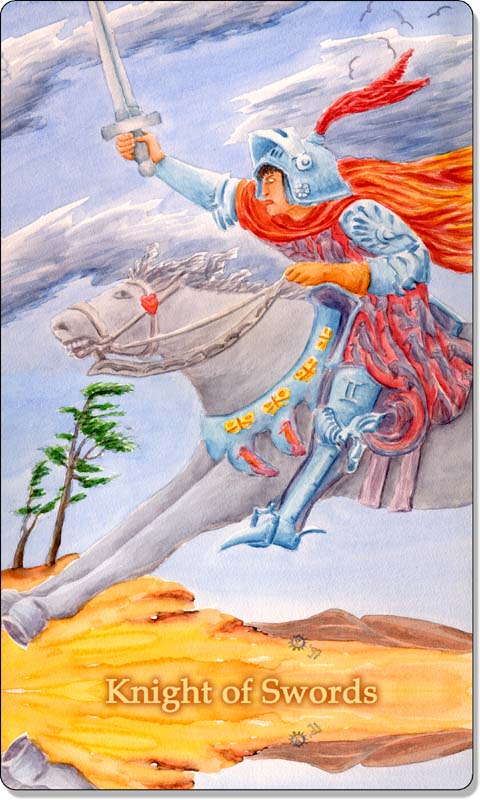 When a court card shows up in a reading, we need to determine if it represents another person, or an aspect of ourselves, such as how you are acting in the current situation, or a good personality to emulate, to get you to where you would like to go. It can also represent situations, so in the case of a Knight, it may be a journey or a trip of some sort. The Knights are the movers and shakers of the group. It's been said that the Knights were supposed to be a part of the deck of playing cards, along with the Jacks (Pages), Queens and Kings, but they were always so busy and out on an adventure and were not there to be counted the day they lined everyone up!

The Knight of Swords brings a lot of energy, movement and speed, apparent in the way his horse is charging forward at top speed. He is quick-witted, quick-tempered and quick on his feet! These qualities also make him quite impatient with others. The Knight of Swords as a person is very direct, he has a sharp mind, and is a natural problem solver and debater. While he has some excellent ideas, he is also headstrong and opinionated. This Knight must be very careful, as by his very nature, he constantly teeters on the edge of mental greatness, and aggression.

He is always charging forward, either with the next great thought, or plan of action, though it is important for this Knight to remember that other people have ideas that may be worth considering as well, if he can slow down long enough to hear them. This Knight has a tendency to believe that his way is the best way (and indeed, it very well may be), but also that it is the ONLY way, which generally, is not the case. He has a bit of a hard time considering other points of view, and is generally very passionate about his own opinion, and will not hesitate to skip over the feelings of others in order to make his point. He can have a tendency to be somewhat overbearing with his thoughts and actions, sometimes even fanatical. Words are this Knights weapons, so if you find yourself in a duel, watch out, they can be cutting and deadly. As an Air sign, they can criticize and analyze like no other.

In the upright position, the energy is moving very swiftly, and the two things that you must watch out for is the tendency to be a "know-it-all", or the tendency to "look before you leap". You may be moving so quickly full steam ahead, so sure of yourself, that you make a mistake simply because you weren't watching where you were going, or because you were so sure that your own personal viewpoint was the most important.

The Knight of Swords carries all of the great mental qualities of the Air signs, such as Gemini, and is very logical, practical and generally quite intelligent. He uses logic and reason for his argument or his plan, the danger is the complete lack of emotional consideration that the Cups offer or the slow and fastidious practicality of the Pentacles. This Knight in particular seems to hold the line most closely with the reversed attributes. Be very careful, it's a slippery slope with this card from the upright attributes to the reversed, which unfortunately in this card, are more negative.

In the Knight of Swords Reversed, the positive, if not somewhat fanatical and overzealous qualities become out of control and give way to recklessness. There are just so many ways we can go wrong with words. You, or someone, could be completely closed-minded to the ideas or points of others, only considering your own ideas the correct ones. You could be pushing your point to the exclusion of all others, regardless of whether or not you have even heard them through.

You could be continuing to argue that your view is the correct one, simply for the sake of being right. It could be that you are fighting for something that is simply incorrect. Either you did not get all of the proper information yourself, or you are choosing to ignore facts to support your point, and "win" an argument. You could be using words against someone, or if someone else, you could be the victim of someone trying to use words against you. A few examples of this include using words to hurt someone emotionally, by either purposely saying things that aren't true just to hurt their feelings, or saying things that ARE true, that should have been left unsaid, under a cooler head.

You or someone else may be using words to harm another's reputation. This includes all types of slander, from formal false accusations, to gossiping and spreading rumors. In today's age, we can even see how this applies on the internet, and specifically, through social media. Don't sink to this level if this is you, and if you know it's not, be careful of who you trust with your secrets. There's an old folk saying that goes something like this "Three can keep a secret, if two of them are dead". You get the idea. Secrets are definitely not safe right now, so don't share it if you don't want it getting out.

Someone could also be outright lying. They could be lying about you to others, or unfortunately lying to you. This includes, the beautiful lie, where someone tells you all the right things that you want to hear, all the while using how those lies make you feel to achieve their own end game. This can be the outright con artist, who is trying to pull the wool over your eyes, or trick and deceive you in some way. Again, please consider the repercussions of your actions very seriously if you are engaging in this. Few people go in intending to do cruel things, most think they are justified due to the negative actions of someone else, but that's not true. Two wrongs don't make a right. It's never too late to make a better decision. This is where the aspects of Libra come into play with this card.

This can indicate that the idea sharing or going back and forth verbally, even bickering, has gone way too far. The most important advice for this Knight is to SLOW DOWN, especially if you receive it in the Advice position of a spread.  If you receive this card in any position other than the advice position, consider it a fair warning! It's likely that you need to immediately put on the brakes and to exercise extreme mental caution. It's time to slow down, think before you speak, don't act or speak hastily, consider your words, count to ten before speaking, and possibly even walk away from arguments that simply aren't worth your time. You can spend endless amounts of time arguing to be right (and maybe you really are), with someone whom, at the end of the day, is not worth your time to even argue with, or in a conversation with someone you DO care for, that is simply going in unproductive circles.  Walking away is not giving up, it's quite the opposite, its choosing happiness, sanity and the higher road, and the ultimate wisdom to recognize how important those things are to your everyday life.