In the Nine of Pentacles we see a very wealthy woman of affluence.  She is dressed very stately in rich flowing robes, covered with a symbol similar to the sign for Venus, also known for luxury and abundance.  She is surrounded by a very lush and healthy garden, which is in full bloom bearing rich, decadent looking grapes, another sign of abundance.  Nine gorgeous, bright, shining pentacles gleam from the bush. She is flanked in the distance by two tall trees, symbolizing their longevity, and a large stately castle, presumably her home, is seen in the background as well. On the woman's arm is a beautiful trained falcon. In the foreground, crawls a small snail.

This particular card is one that is ripe with symbolism.  The woman's gown is covered with the symbol for Venus, which is clearly a nod to the earth suit, and its assimilation with richness, luxury and abundance.  When this card appears, you may want to consider where you are doing well and experiencing abundance.  This card as a nine, symbolizes fruition, it is a number near the end of its suit, its cycle, and you too, may be nearing the end of a cycle, or reaching your goal.  Seeing this card indicated success and financial prosperity.

The symbols on her gown of Venus must imply matters of luxury, as they certainly do not impart their meaning of love on this card.  This card as a nine is also associated with the Hermit, the solitary figure of the Major Arcana.  In the nine of pentacles, the implication is independence.  You are not depending on anyone else for your riches; you are "a self-made woman" so to speak.  This is a card for a single woman who can easily take care of herself.

This could also indicate being a spinster or even a widow.  The astrological association for this card is Venus in Virgo.  We have seen where Venus' association with luxury comes into this card; Virgo, aside from ruling the Hermit, is also associated with the virgin, and the most singular of all the signs. It is also a feminine Earth sign. This card is all about luxuries, and as a card of independence, it could be that you are creating hobbies or pastimes that you do by yourself that you really enjoy, such as gardening, as seen in the card.

It is also encouraging you to spoil yourself, you have worked incredibly hard for all you have and deserve to pamper yourself! Get a message, indulge in a pedicure, pick up that 'expensive-but-worth-it' bottle of wine.  You could just be enjoying some well-earned leisure time. The whole point of working so hard to attain life's luxuries is to enjoy them, this is where you really get to see and experience the fruits of your labor. Relax and indulge a bit.  Go on, you've earned it!

Some may see this card as entrapment of some sort.  The woman is out in her fenced-in garden, the bird is hooded, her hand is gloved, even her gown is very heavy and weighs her down.  Others may see this as protection. You may need to ask yourself what systems or personal situations you have built up to take care of yourself or to protect yourself that you now feel trapped or stifled by.

In terms of entrapment, this woman is certainly very secure, but it now leaves little room for movement.  This is like the princess, or in this case the queen, who has acquired everything she could ever want in her ivory castle, but all she wants now, is her freedom and independence.  That is something birds symbolize, yet this bird is hooded, and as such, cannot fly away.  Is there some part of your life that is very successful by all outside accounts but you wish you could just drop it all and get away?  You could be struggling with issues of staying in your comfortable, cozy lifestyle, or making a break for freedom and the wild unknown.

On the other hand, if you see this card as protection, you may see it as you have worked incredibly hard to get where you are, and you may be more than happy to give up a little bit of freedom, or the ability to just "pick up and go", in exchange for the lifestyle you have built for yourself, even if it requires more prudence and discipline on your part. You didn't get to this point by flying by the seat of your pants, so to speak. Many times we must sacrifice spontaneity and flash in exchange for self-discipline and hard work to create a good life for ourselves. In today's world, many women see being financially secure and independent AS the sign for freedom.

All things considered, this is a very positive card, particularly if you have approached the Tarot on financial matters.  This card shows that you have done the work laid out in all of the cards of the suit that came before, the studying, the planning, the discipline, the reassessing, the labor, the perseverance and the commitment to see it all through.  Your success at this stage is no accident, and you are not merely lucky.  You have worked really hard to get here and deserve to be enjoying the fruits of your labor at this point.

The luxurious abundance is your well-deserved and well-earned reward for all of the hard work you have put in up until this point.  Financial success is rightfully yours.  That is why everything in this card is growing so lush and abundantly. This is the garden she began with just the seed in the Ace of Pentacles, and throughout all of the discipline she has applied in the suit, this is her reward.  The falcon is another symbol of discipline.  This card denotes the successful completion of a project, or the financial or material reward for self-discipline and hard work applied.  You could also be acquiring property or land.

Lastly, many Tarot scholars have equated this card with pregnancy, especially if accompanied by other cards indicating this, such as the Empress, the Ace of Cups, Page of Cups, ect. This card is known to be a paradox in so many ways and again in this respect, it does not disappoint. I personally don't typically equate a card associated with the virginal sign of Virgo, associated with the solitary figure of the Hermit, and standing for feminine independence as one indicating pregnancy!  Yet, signs of Venus, ruler of the Empress, abundance and fertility herself are everywhere in this card, and it is a number 9, symbolizing not only the completion of a cycle, but the number of months a pregnancy lasts.  I would only consider this meaning however if confirming cards appear. 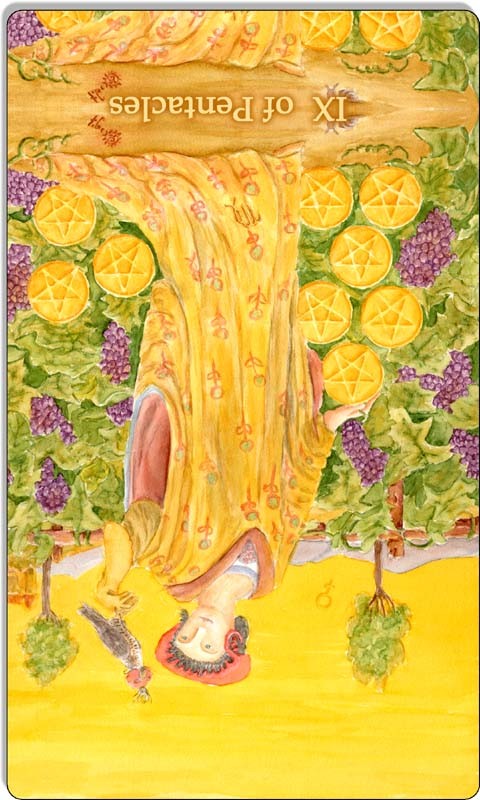 In the reversed nine, you are having difficulty achieving the financial independence you desire.  You may lack the discipline, prudence, hard work or commitment to meet the goals or tasks that are required of you in order to make the material gains you desire.  The suit of pentacles is filled with decisions, study, hard work, pruning, reassessing, and more labor to reach the fulfillment and success indicated by the nine.  You likely need to go back through and see which steps you have not completed successfully to get to where you want to be.  It could be that you need to return to the upright eight and determine whether or not you need more education, skill, or hands on experience, or simply more dedication to your goal.

You could find yourself desiring or taking luxuries that you haven't earned yet.  For example, you can't really afford to pamper yourself with an expensive vacation if you haven't done the work necessary to earn yourself that bonus at work that is going to pay for your trip. You can't rightfully expect your garden to bear a delicious abundant crop of fruit if you haven't put in the time to plant, water, cultivate, prune and lovingly tend to it up until that point.

Alternatively, it could indicate that you are overworked. You have been spending so much time pursuing your financial or material goals and projects that you have little time or attention for anything else.  You could be working so much that you are isolating yourself from your family and loved ones, a negative meaning of the term independence described in this card, or you could be so busy with work demands that you have little time to relax and enjoy some of the nicer things, whether it be some quality time with yourself or just a nice indulgent glass of wine.

You could be pursuing too many tasks at once, with your energy scattered, and not enough attention to see any of them through to completion.  In this instance you would need to go back to the six and delegate some things out, or to the seven and decide what you need to prune away.  You could be caught in the trap of not having enough time or resources to put into building your personal business that you would like to be your long term career, because you have to spend so much time at your "day job" to pay the bills until then. Again you may need to delegate and prune, and spend as much of your free time as possible honing your craft, as indicated by the eight.

Like all reversals, we see a deviation from the norm one way or another.  It could be that you are either becoming TOO materialistic, or on the other hand, you are trying very hard not to be viewed as materialistic or throwing your money away on "unnecessary luxuries". You could want the lifestyle of the rich, but none of the hard work or responsibilities to attain it. Conversely, you could feel that no matter how hard you work, you do not have enough, and are hesitant to spend on anything "extra".

When this card comes up reversed, the feelings of entrapment and desire for freedom can be intensified.  You no longer see the hard work that leads to financial independence as freedom itself, you see yourself more like Princess Jasmine, who has all the riches she could ever need within the palace walls, yet she just wants to get out and experience the world!

This card reversed could indicate the end of a pregnancy, either by birth if you are near term, or by termination or miscarriage if early on.  Because of its association with both Virgo and independence I don't consider it an indication of pregnancy unless there are other cards confirming as such.