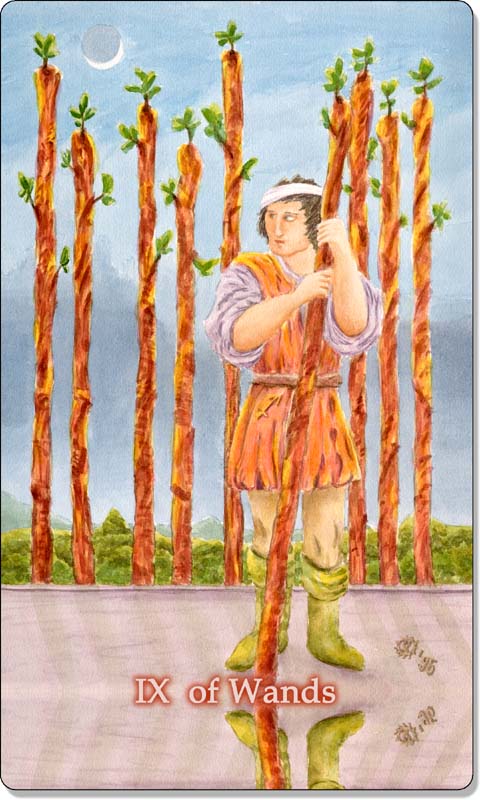 In the Nine of Wands, you are both defensive and weary from battle. You have been successful; however there is quite a cost. The wrapping on the soldiers head can indicate that the wounds could be psychological or emotional in nature. You could even be anticipating a psychic attack. You stand weary looking over your shoulder, expecting further attack, you are suspicious and have not yet laid down your Wand or weapon. It is possible you still have enemies out there, waiting for you to let your guard down before they attack.

You are holding the line, possibly suspending activities until you are certain the coast is clear for smooth sailing. You have strength stockpiled, which was gained in the preceding card of this suit. Nines carry the energy of both solitude and attainment of goals, and the energy here is nearing completion.

You stand alone, but if you hold out and are cautious, you will be successful. The key with the Nine of Wands is to review what you have already done, decide what was successful and what was not, trim the fat and try again. 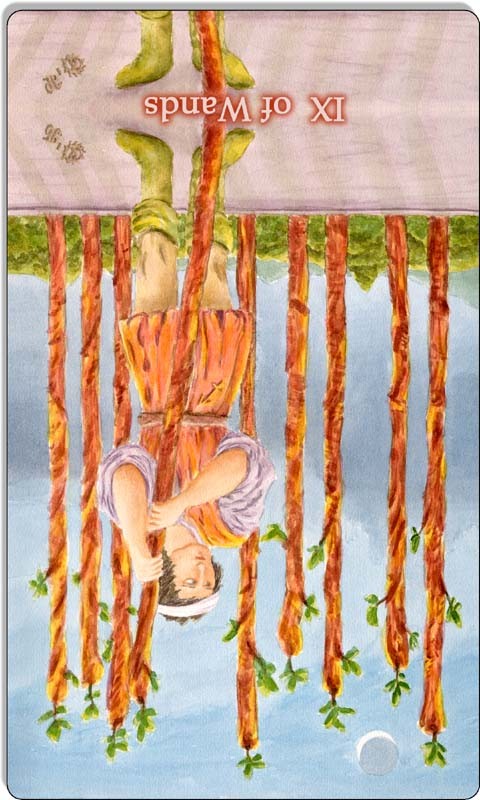 In the Nine of Wands Reversed, you are still weary and fearful, however at this point it has consumed you and become debilitating. Your defense mechanisms have failed and you are no longer holding down the fort. The problem or obstacle you were facing was too great to handle in the manner you attempted.

Luckily, there are many different ways to approach a problem, and sometimes an adjustment in our thinking is what is called for. For example, someone wise once told me, "A mistake is only a mistake, if you do not learn anything from it". Even our failures can help to set us up for our successes, as once we have learned something did NOT work, we have narrowed down the field of things that MAY work, and we try again.

This is where you must be weary of the mental harm you can do to yourself. You begin to feel isolated, alienated, and alone, with mounting obstacles and problems. You want to turn and run away and just leave all of your troubles behind you. We know however, that we can't outrun our problems forever, and at some point they will be creeping up in the rearview mirror, asking us to face them, to resolve them, even if difficult, so we can be free again.