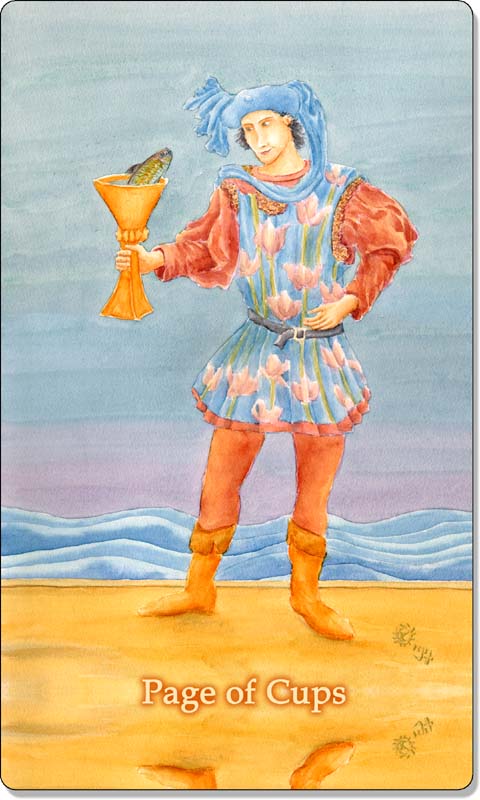 In the Page of Cups, we see a young man standing with a single large golden Cup in his hand. In the Cup is a fish, who appears to be looking back at the young Page, who is looking at it. He wears a short tunic, as do all of the Pages, as a symbol of their youth, or naiveté, as compared to the Queen or King, whose long gowns connote wisdom, respect, authority and tenure. The Page was seen as more of an adviser to the King, such as a court jester, who was the only one allowed to speak the truth to the King and not lose his head!

Pages bring something young or new. In the case of the Page of Cups, we are likely dealing with something surrounding relationships, something you have strong emotional feelings about, or even a creative project, a passion, your "baby" that you are working on, or just beginning.

As a person, this card could be referring to a youth, or a child, possibly your own, who is either a Water sign, or in the given situation, is exhibiting qualities typically assigned as such. This child is emotional, not necessarily over emotional, simply in touch with their feelings. It could be telling you that you yourself need to get in touch with your feelings on this new situation. This could be referring to a youth that is very intuitive, or one who is happily creating artwork, writing songs or pursuing other creative endeavors.  They could be idyllic, a dreamer, or sensitive. They want only to get along and be supportive. They represent the early development of their element.

This could be a young Scorpio who does not yet have the life experience to understand the depth of their feelings, the young Cancer who does not yet have the emotional maturity, or the young Pisces, who has yet to understand and develop their gifts. If its representing you, then you would want to ask yourself if any of these qualities sound like the phase you are currently in.

As a card of advice, it could be indicating that there is a creative project that brings you great joy and happiness that you should be putting some time into. Take a break from the grueling day to day activities and find some time for play, or again, whatever creative pursuits you have not had time for lately.

As a messenger card, messages you receive now will likely be about love, relationship, or projects your heart is involved in. You could literally be receiving love notes. As a water card, it's important to remember that sometimes those messages will come intuitively, by way of signs or symbols, or even in a dream. The Page of Cups, if found alongside corroborating cards can sometimes indicate pregnancy or a new baby. 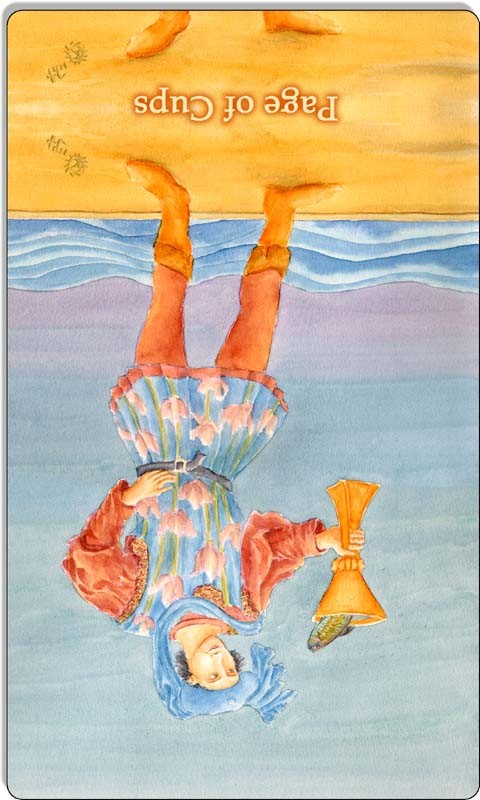 In the Page of Cups reversed, we see traits that are related to the Suit of Cups that are either excessively immature or out of balance. Pages represent the young, semi-immature expression of the suit in general, and when the card is reversed, there can be a real difficulty with it. We see someone who is afraid to open up. This may happen for a variety of reasons. They may have opened up to someone, worn their heart on their sleeve so to speak, only to not have their love returned, or to have gotten hurt.

You could be very insecure in your relationship, and need the constant reassurance from your partner that they do indeed, love and want you. It could be that someone, whether it is you, or someone else, is being emotionally manipulative, using the emotions of another to get their way. It could be less ominous, such as simply taking advantage of someone else's affections. For example, allowing someone to do nice things for you because they are interested, though you yourself are not.

Alternatively, it could be you that is lovesick, and waiting around endlessly for a situation that doesn't have much potential to move into something beyond the infancy stage, with more promise. It could have been just a one night stand, and it's time for you to mature and move on.

As a Page, the meaning of messages is always prevalent in this card. In this case, the message that you are receiving is likely in regard to a relationship of some sort, and is usually not very good. You could receive a break-up by text message, or the old "it's not you, it's me" speech. If the message is not about a relationship, it could be indicating that you are spending too much time with your head in the clouds, daydreaming about your hobbies and passions with no real action, and it is taking too much time away from the tangible or physical things that you need to focus on.