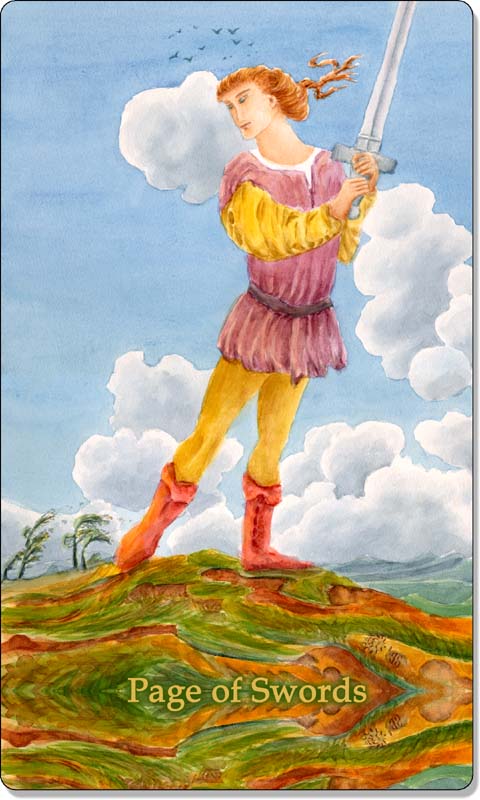 In the Page of Swords, we see a young man standing with his sword raised and at attention, he is alert and ready to swing! He wears a short tunic, as do all of the Pages, as a symbol of their youth, or naiveté, as compared to the Queen or King, whose long gowns connote wisdom, respect, authority and tenure. The Page was seen as more of an adviser to the King, such as a court jester, who was the only one allowed to speak the truth to the King and not lose his head!

In the Suit of Swords, this youthful page represents mental activity. With Pages, things are just beginning, or are still in their early form. You could be having a lot of ideas, but have yet to sort them, discard the ones that will not end up serving you, and putting form to the ones you keep. You may be new to the situation; however you are certainly ready to take action! This page is ready to get going. What he lacks in experience he is ready to make up for in willingness, he is hungry to get involved, and learn everything he can. While you may have some good ideas, it is possible you may be disregarded, because you are seen as too new yet. That's ok, with this page, you'll get your ideas out there.

If this card represents a situation, then again, it is one that is just beginning, and in this case is likely in the realm of thought, for example, you could be starting a writing project and trying to figure out where to begin. It could be a speaking engagement coming up that you have yet to write your speech for.

Like the other pages, this card could represent a child, your own, or another, that is represented by one of the Air signs, or it could be the immature expression of those qualities. A smart and inquisitive Gemini, who has yet to learn the dangers of gossip, or that there are always two sides to every story. A Libra, who has yet to develop the critical thinking skills required to make sound, rational decisions, or the cool and aloof Aquarius who has yet to learn that conversations are for more than the transfer of information. These guys might still be learning how to put the latest piece of technology back together after they took it apart to examine it!

Swords are also the suit associated with difficulties, power struggles and strife, so in the Page, we may see the early development of these things. You could be starting out with simply a "battle of the minds" that could eventually lead to real conflict. Be careful that in sharing your ideas, you do not come off as condescending or a "know-it-all". It is a slippery slope.

Finally, as a messenger card, it may indicate news headed your way. Because the Swords are known for difficulty, even in the upright, the news could be challenging. As it relates to the mental world, it could be sharing ideas or getting new information; you could receive a text message, email, or find out something by way of a social media update. As a card of the Air suit, you could be dealing with things inherent in the Air signs, so it could have to do with the law, or any legal pursuits; you could get papers in the mail, documents arrive, or it could be something Uranian in nature such as a recall or update for your electronic gadget or appliance. 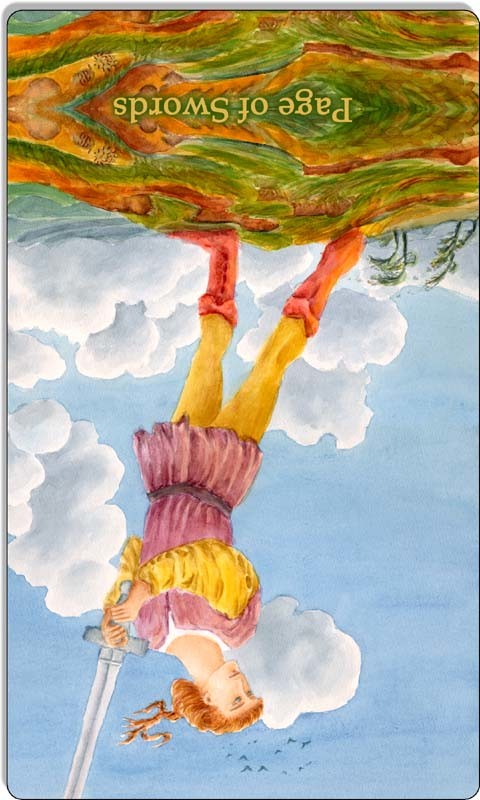 Because the Suit of Swords is the suit of challenge and difficulty to begin with, when the court cards of this suit come up reversed, they can be particularly challenging. These cards can deal with all of the difficulties of the air signs at the onset. Since this card is about new ideas, it could be that you do not have any, or any that you feel are worth sharing or expanding upon. You may be timid to share, for fear you will be regarded as too green and your ideas scoffed at.  It could be that you can't think of what you want to say, or write.

You could be caught off guard, at a loss for words, the proverbial cat-got-your-tongue, which can be very frustrating if this comes when you feel you are being attacked. Alternatively, you could have plenty to say, either verbally attacking someone else, or in defense of what you believe is an attack from someone else. Either way, the words you speak now are likely to be scathing, and you may want to think very carefully before you speak. Just because something is true, does NOT mean that it needs to be said. There is no need to tell someone else about themselves, simply to make yourself feel better or defend against their comments.

Intentions could be at an all time low, someone, either yourself or another, could be engaging in hurtful gossip, or someone can be lying to get what they want. Deceit is a possibility. Beware the beautiful lie, where someone is telling you everything you want to hear in order to get what they want. Swords are ripe with pain and anguish and this kind of deceptive behavior will often hurt more than an outright verbal attack or wounding.

Someone could be emotionally immature, and while that may seem like a Cups trait, the way we handle it is very swords in nature; the tendency to say anything to protect ourselves, at someone else's expense, using words as weapons, lack of communication, thinking of what to say next instead of listening, hurling insults or indignities and generally closing yourself off to seeing things from a different point of view are all representations of this.

As a messenger card, the news that accompanies the Page of Swords reversed is rarely good. Court summons, lawsuits, cut contracts, denial of requested documents or information, undesirable mail, emails and texts gone awry, are all examples of messages that we would prefer not to receive. Because the Suit of Swords can be particularly painful, you could also hear hurtful rumors, see slanderous words written about you on social media, or even receive hate mail. Unfortunately these are very bothersome manifestations, but this is a very strong suit, and forewarned is forearmed.