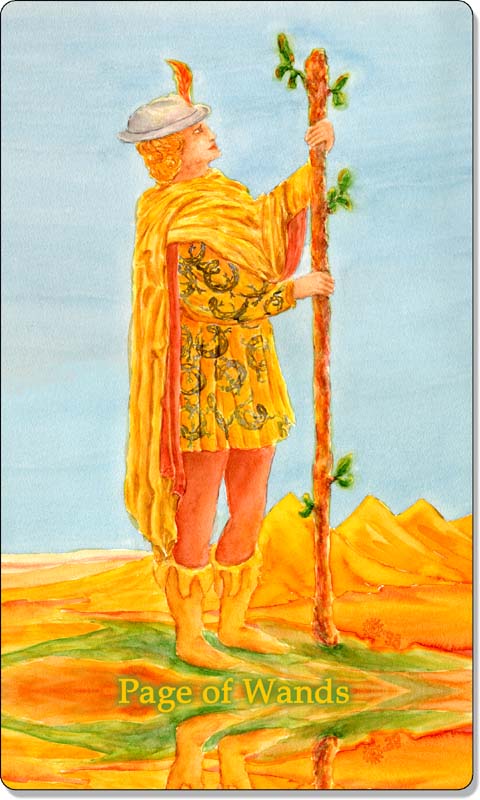 In the Page of Wands, we see a young man standing with his staff, appearing to be at the ready. He wears a short tunic, as do all of the Pages, as a symbol of their youth, or naiveté, as compared to the Queen or King, whose long gowns connote wisdom, respect, authority and tenure. The Page was seen as more of an advisor to the King, such as a court jester, who was the only one allowed to speak the truth to the King and not lose his head! Fortunately in the suit of Wands, the leader is very benevolent, so this is not so much of an issue.

Pages bring youthfulness, and the Page of Wands is the "most youthful" in spirit and behavior of all. As a fire sign, spirituality is important to this page, so he may be a bit of a free spirit himself, not having yet settled into any specific situation. He is still testing all of the angles and trying to find his fit. He is excited to begin something new, a creative project, a hobby, something that he is passionate about.

As a person, he is excitable. Think about combining the qualities of the Fire signs with the immaturity (by nature) of a youth. A young Sagittarius really has a hard time "biting their tongue" so to speak, they just say whatever pops in their mind. The Page of Wands, like all of the Wands court cards, features the Ouroboros on his tunic, or the snake/dragon biting his tail, symbolize evolution, completeness, wholeness. In the Page, the serpent is not yet biting the tail, he has not reached that point yet, he is still developing. A young Aries might have fantastic ideas that he can't wait to get started on, yet lacks the discipline to create a plan to carry it through to fruition. A young Leo might have the makings of a star, and love the spotlight, but has yet to master the discipline necessary to lead those people where they both need, and want to go. All of these traits will develop as we move through the ranks.

This card does not always represent another person, many times it will pop up when you are first starting something new, you don't quite have a clear plan of accomplishment yet, but the idea, the desire and initial spark and drive are there. The next step is to decide what you will need to make your work take shape so you will see tangible results. Pages also carry the meaning of the messenger, and the Page of Wands more so than any other Page. When the Page of Wands shows up it could be a sign to keep your ears open, welcome news may be on the way! 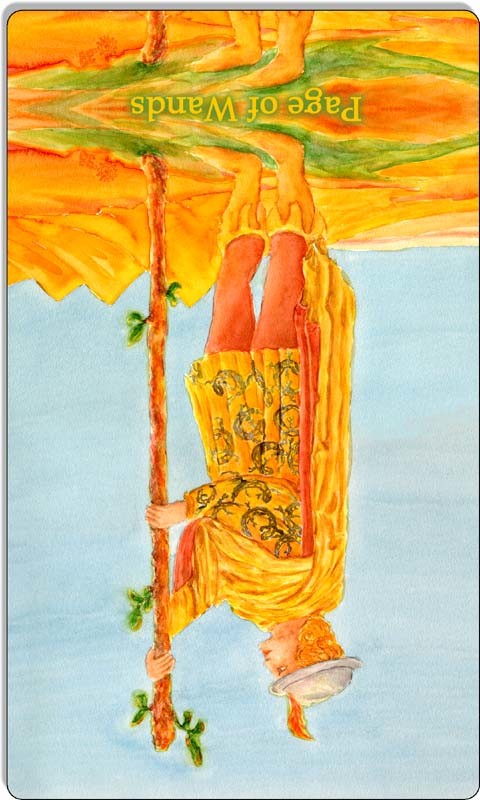 In the Page of Wands reversed, we see many qualities of a Fire sign youth who is not living on the positive side of the traits their suit expresses. You may have a child who is bossy, rude or demanding, one who has been spoiled and now acts that way as well. You may have a child who does not want to share, or one who throws a temper tantrum whenever they do not get their way, or get what they want. This does not have to be a youth, but could be someone who behaves this way when things do not go their way. They could be sulking and generally acting like a two year old who only "wants what they want" regardless of others involved.

This could also represent a real lack of motivation for a project. You may have had an idea that you were originally excited to possibly move forward on, but have not been able to move beyond the initial state of infancy in your project. This could be lack of direction, difficulty focusing, or simply a loss of interest. The work that is needed to take this project off of the ground floor may appear too overwhelming, so for now, the project sits untapped. The potential is there, but it has yet to be manifested. Alternatively, as a principle card of messages, this card reversed could suggest that the news is not welcome or pleasant.