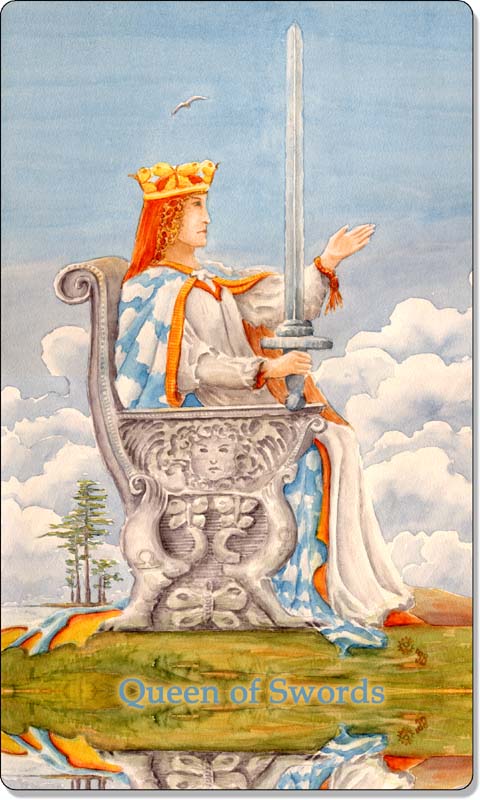 When a court card shows up in a reading, we need to determine if it represents another person, or an aspect of ourselves. It can indicate how we are acting or feel in a given situation, or suggest a personality to emulate.  Sometimes it's a quality we project onto others, and occasionally, they represent situations. However, I typically find that it represents either someone else involved the situation, or some aspect of the querent.

In the Queen of Swords, we see an austere woman sitting on her stone throne.  Unlike the other queens, she is the only one who has a low back throne; she is taller than her chair.  She is also the only queen to be profiled from the side, highlighting how straight she sits, her posture impeccable, no slouching, as if to imply that she is "straight up" and demands such in return.  She holds her hand raised as a call to truth and action from others, and her Sword as well, one of only three in the entire deck, stands pointing directly upright, again, a representation to her commitment to truth.  Her beautiful blue robe is covered with clouds representing the Air suit she rules, and her crown, adorned with butterflies, representing communication. There are also wings and a butterfly on her throne indicating the same.

The Queen of Swords rules all things mental.  She is the great communicator, the impartial judge and jury.  She does not let emotions cloud her judgment.  She has the ability to listen carefully, without being overcome by emotion, to all parties involved, and then render a decision based on fact and logic.  In this sense, she is almost a direct opposite of the Queen of Cups, who is ruled and heavily affected by her emotions.  The single bird flying high in the sky is symbolic of this queens wisdom, something she posses an enormous amount of.  The sorrow she has experienced (as a Swords card), has made her quite wise.

The Queen of Swords is Air of Water (all queens are water), and as such, I find her a good mix of both the yin and the yang. Although all queens are yin and introspective in nature, this queen has the innate ability to utilize her skills in an outward fashion.  She is not afraid to speak her mind, and will tell you what you need to hear, whether you like it or not.  In her speech is her commitment to truth.  She will pretty much always "tell it like it is". Again, her upward pointing sword and raised hand indicate both her commitment to truth and honesty as well as her expectation of such in return. When dealing with this queen, you need to simply state the facts as they are, your honest opinions, or your expectations directly.  If this represents you, you are either communicating this way, or this is what your situation calls for.

The difficulty with this queen is that she expects these things from others as well.  In her ability to be discerning, sharp and logical, she also has high expectations of others.  She may be critical and unyielding, and demand such near-perfectionist qualities of those around her as well.  If this queen is you mother, wife, boss or other important female in your life, it can be challenging to meet her standards.  If you believe this is you, try to cut others a little slack.  It takes time.

This queen is intelligent and a quick thinker, one who values the mind and its abilities.  When you are faced with a decision and this card shows up in your reading, it is a clear indication that you are being advised to make a logical, rational, unemotional, unbiased decision, based on simply the facts and the information you have at hand.  Do not let yourself get wrapped up in the feelings or emotions of the situation or the people involved. That is not to say that you do not care, but that in this situation, that is not to be part of your determining factors.

She has a direct connection to the card of Justice (an Air card), and this is also one of only three cards in the deck whose Sword is pointed directly upright.  The other is the Ace. How would the woman featured on the Justice card make decisions or handle situations?

As this is a Swords card, some Tarot scholars have equated this card with representing sorrow.  This idea is further symbolized by the rope around her wrist, an old symbol of widowhood, although in today's age, it can also indicated one who is divorced.  Perhaps she is sad, but the real implication I believe is that difficult life lessons along the way have made her wise (if not a bit hardened).  However there are many situations that this serves us well, and allows us to be more discerning. While the clouds still surround her, it is clear that she rises above it.

Some may call her a strong woman, others, an ice queen.  In mythology, she has been linked to Athena (or Pallas Athene), who in Greek and Roman mythology was known as the Goddess of Women, Wisdom and War, or the three W's (according to my high school mythology teacher anyway!) She was said to spring fully grown from her father's (Zeus/Jupiter) head as an intelligent woman.  She is a leader of women's right, and she does not marry. Truth and justice is her battle cry.

The Queen of Swords represents the Air signs, and as such she associated with the communication signs of Gemini, Aquarius and Libra.  In Gemini she is the excellent communicator, and the IT guru of Aquarius.  Aquarius has a real commitment to truth and technology alike, both areas where this queen excels. She is extremely comfortable in her association to Libra, as this sign's qualities of fairness, decisions and impartiality are right up this queen's ally. 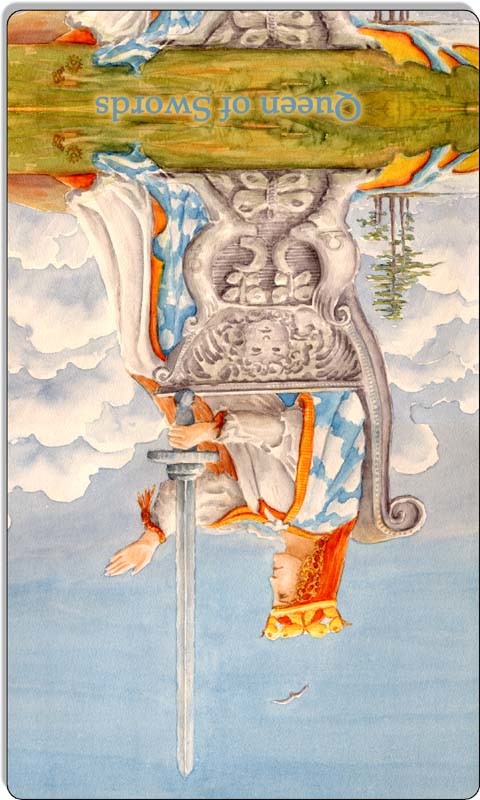 When the Queen of Swords is reversed, she will likely be displaying the less desirable and more negative qualities of her suit. In the suit of Swords, it is likely that life and others have disappointed her high expectations and are now receiving her harsh backlash.

If the upright Queen of Swords is already critical and unyielding, the reversed queen can be downright cruel, bitter, or nasty, some may say, flat out-bitchy. You have become completely critical and judgmental towards others, and instead of using your sharp discerning mind to offer constructive honest criticism, you have developed a sharp tongue that simply insults others and turns them away.  You are losing friends and respect; no one wants to heed your wisdom.  You could be a pessimist or biased in your opinions.

Your expectations of others are so impossibly high, others are not interested in even attempting to meet them.  As such, you become even more judgmental of others inabilities.  At the same time, you are such a perfectionist, you may demand the same impossibly high standards from yourself, and either judge others even more harshly for not doing what you are doing yourself, or fall into self-loathing when even you can't meet them. You are hyper-critical of yourself and others.

You are no longer committed to the truth, but to your quest for power.  You could be manipulating others to achieve your own desired results, and being dishonest, but as intelligent as you are, you always have a quick (if not deceitful), answer at the ready. Trickery is just another means to an end. As a judge or other party committed to truth and honesty, it can indicate you are corrupt.

Painful life experiences have made you narrow-minded and bitter.  You may long for relationships and warmth but you are too hardened over at this time.  You are distrustful of others in this way, and anyone close enough to get near you in an attempt to warm your heart runs the risk of being chopped down by your sword in defense!

In matters of relationship, this card is still an indication of a widow, but takes on more significance for divorce or separation.  It indicates a painful split that is not clean cut, one that is causing you significant grief and bitterness. As a widow, your grief and sorrow has led you to become a bitchy, hardened woman, or you have simply not moved out of this fresh stage of sadness yet.

Lastly, there is the possibility at the other extreme that you have lost your edge, and your ability to be fair, logical and impartial because you are letting your emotions get in the way.  Instead of being discerning based on truth and facts, you are letting your heart and feelings cloud your otherwise good judgment and make decisions that you normally would not make. Your emotional attachment to a situation is distorting your normally clear vision and clarity of thought.

In the negative qualities of the signs she represents, she can be a double-talking gossip queen who uses her words to hurt others in the communication sign of Gemini. She has definitely lost her quest for truth, and does not seek to elevate the world or work for the greater good as an Aquarius, and sadly, as a Libra, she is no longer fair and impartial, but biased, judgmental and corrupt and with a commitment to only herself.