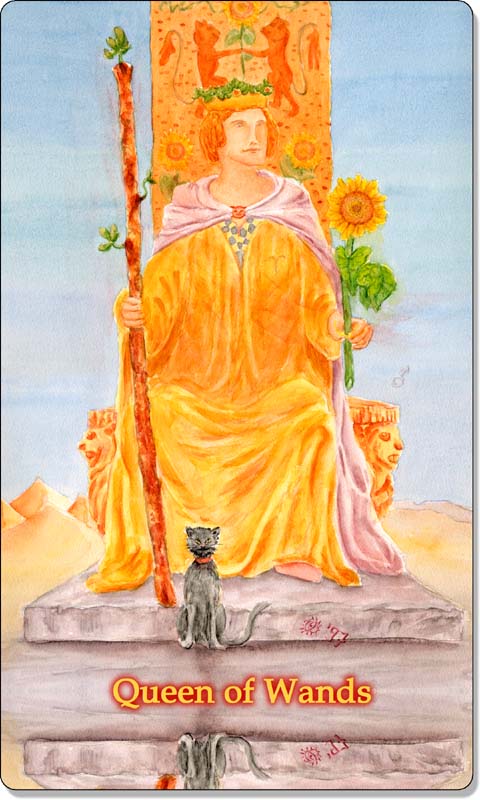 When a court card shows up in a reading, we need to determine if it represents another person, or an aspect of ourselves. It can indicate how we are acting or feeling in a given situation, or suggest a personality to emulate.  Sometimes it's a quality we project onto others, and occasionally, they represent situations. However, I typically find that it represents either someone else involved the situation, or some aspect of the querent.

In the Queen of Wands, we see a woman in a bright sunshine yellow, full length robe sitting squarely on her throne, her crown is adorned with flowers. She holds a large Wand as her staff in the one hand, a beautiful sunflower signifying vitality and life in full bloom in the other.  The arms of her throne are carved as lions, the symbol of the sign of Leo and symbolizing strength that she is associated with, while a black cat sits at her feet. Some may say the cat is an animal familiar, or that it signifies intuition, which would befit a Queen's introspective nature. Some say the cat is protector. It also represents the small cat, versus the large cats seen on her throne, which represent power, something this queen possesses.

The Queen of Wands is the least "yin" in my opinion, full of fiery energy!  She is warm and passionate, a kind and sincere woman.  She is generally a fairly happy-go-lucky woman with a bright spirit, and an honest personality, she is very outgoing.  She also represents sexuality, as sexuality falls under the domain of the fiery suit of wands, and she is the only queen who sits with her legs apart.  This could also represent desire.

She is also a very confident woman and projects this quality out to those around her. She often has a bold personality, is independent and strong and can be rather tenacious at times.  She may give her opinion without being asked for it, but only in kindness and because she feels she has something valuable to offer. She often has a smile on her face, as she generally just has a love and appreciation for life.  She is very likeable and makes lots of friends easily.

She is a leader, one people naturally gravitate to and seek to follow, much the same way a sunflower will track and follow the sun. She is very determined, and often gets her way, simply because she is powerful and persuasive, yet respected. She loves to share her opinion, and likes to be center-stage or the center of attention.  She very much would like to be well-known, if not as a famous entertainer, than as the leader in her career or industry.

Her bold attitude but kind spirit makes her an excellent advocate.  As the Fire aspect of Water (all queens), she is the least passive, and most outspoken. She will speak up for injustices and argue a point if she feels it is worthwhile.  An admirable quality, if this queen cares about you and you have been steamrolled in any way, she will fight for you just as hard.  That is the Strength in her.  She will defend and protect you as strongly as she will herself.  Her love and devotion are very strongly felt. She values personal freedom but is fiercely loyal. She does NOT like to be bossed around, however she is not attracted to a partner who is weak or meager either.

She represents the fire sun signs of Aries, Leo and Sagittarius in their mature qualities.  As an Aries, she is a leader, she pioneers boldly where others haven't gone yet, not afraid to carve a new path and seek new adventures. She is ever the drama queen as a Leo, but this is also what makes her bold, outgoing, self-confident and highly creative!  As a Sagittarius, she is the proverbial optimist.  This queen often has a smile on her face and a belief that things will work out. As a Sagg she has grand ideas and worldly visions for the future. 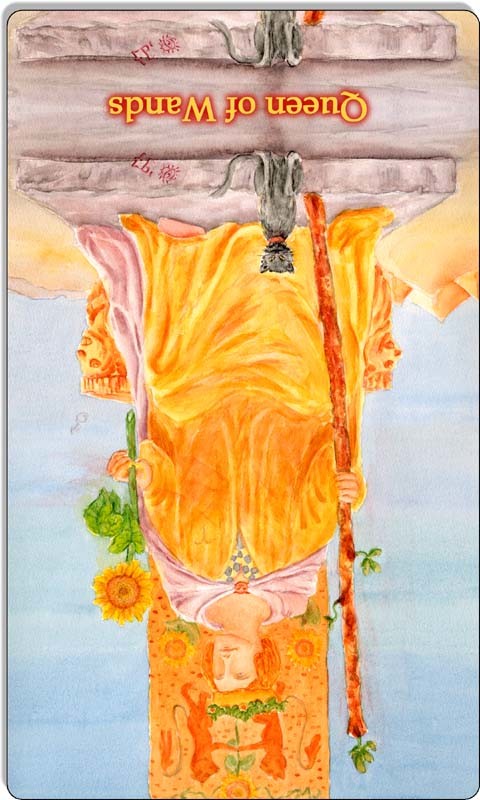 In the reversed Queen of Wands, we see more of the negative qualities of the court card.  In this case, the queen may feel disrespected or ignored in some way, maybe undervalued, and we see her acting out all of the less desirable qualities of the fire signs.

Whereas the upright queen is bold and confident, the reversed queen can suggest that you have become domineering and self-righteous, bossy and possibly even tyrannical.  Maybe you feel others aren't listening to your good advice or that you have been through a similar situation and know the best course of action however it is not being heeded. This has led to some controlling behaviors.

This honest queen has a knack for getting what she wants simply because she is so persuasive, but in the reverse, you or someone else, could be resorting to deception and manipulation as a means to an end because you have lost your passion for doing what is right. You are prone to selfish behaviors and actions.

As the center of attention that you like to be, be careful that you haven't taken to bragging and showboating.  No one will want to follow a leader that is vain and self-centered.

Her normally passionate demeanor can lead to anger in the reverse if you cross this queen.  Watch out!  Once irritable she can become bossy, demanding, and petty with a quick temper as well. She is quick to defend you, but if you cross her, she will be just as quick to swipe that lion's paw and cut you down!

This is the most sexual of all the queens, and in the reverse queen, there could be an increase in promiscuity, infidelities, or jealous controlling behavior towards a partner.

You could be tyrannical, quick tempered or bossy like an Aries, selfish, vain and promiscuous like a Leo or boastful, manipulative and righteous like a Sagg when angry, or hurt.  Look to the negative qualities of each of these sun signs for more clues.

Lastly, this queen reversed has been referred to as a shrinking violet.  While you are not acting out, you are not expressing all of your wonderful bold and beautiful fire energy qualities either. You are hiding, staying out of the light and in the shadows.  Perhaps you don't believe in yourself or you have begun to doubt your abilities.  Maybe you are embarrassed about something.  Either way you need to cultivate some faith (like a Sagg) and build up your inner strength and let your light shine boldly!