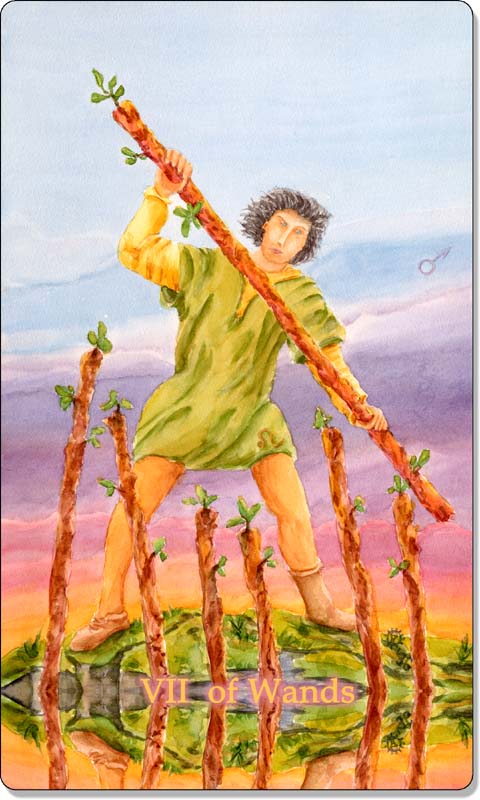 The King of the Mountain card. Sevens carry the theme of Don't Give Up. When the Seven of Wands appears, you are trying desperately to hold onto your position, and fight off those that are opposing you. You have reached the top, or the pinnacle as they say. Being at the top has its advantages however there are always those who are trying to bring you down. Once at the top, you have to face the opposition, defend your position and overcome obstacles. Your footing can be precarious, both literally and figuratively.

The upright seven is saying that this is not a time to back down, rather to stand your ground and stay the course. You are being asked to rise to a greater challenge, however when you do, with the additional effort and energy you expend, your rewards will be that much sweeter. 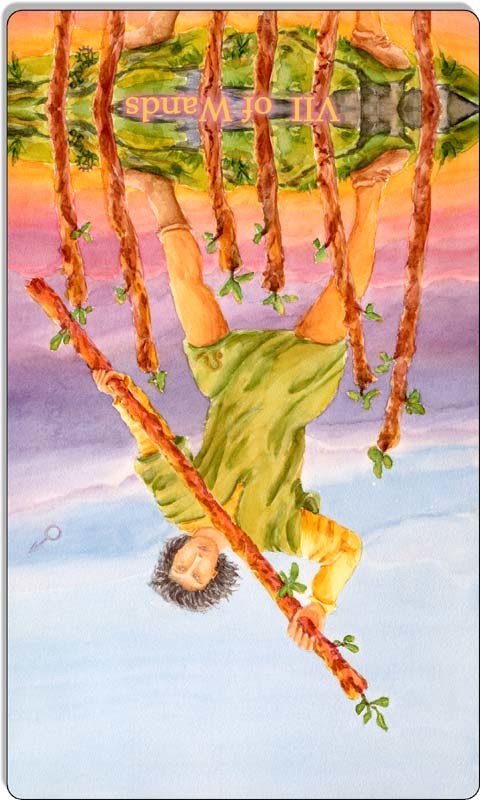 Like the fives, the sevens are also cards of difficulty. In the Seven of Wands Reversed, it may be time to let go, or give up the fight. What you are fighting for may no longer be worthwhile, or serve your highest good. Consider whether you are still fighting for what you want or believe in, or are you simply still fighting for the sole purpose of winning, and have either forgotten, or no longer care, what it is you were fighting for to begin with?

Alternatively, you may not be in a position to win or hold out much longer. If you do, at what cost? You are running on fumes at this point. It may be necessary to revisit your goals and plans and decide on a new course of action. Staying with the way you have always done things, for the sake of just that, is counter-productive. It is time to look outside the box, so-to-speak.

This card was also known as Embarrassment because of the type of behavior it can elicit. It can represent the breaking down of walls or barriers. Naturally, as you feel you begin to falter or waiver, you may begin to back off or negotiate so you look favorable or you may become passive-aggressive. On the other hand you may become overly aggressive as you desperately try to hold out. Neither is a good side of the fence to be on. It is vital that you refocus your energies, consider what worked for you before, what parts of that can be salvaged, and then incorporate those into a new idea or plan, and get the troops behind you again. In order to do this, you may need to consider the goals of those around you or underneath you, and see if you can work in the same direction.