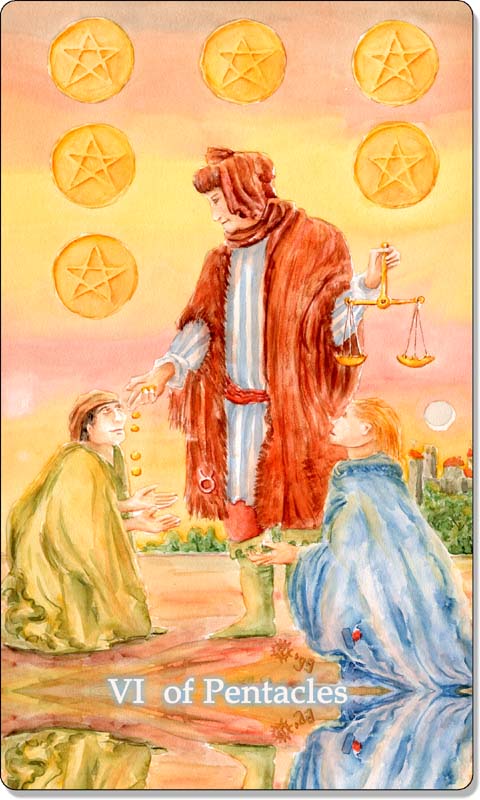 In the Six of Pentacles, we see a man of considerable wealth, dressed in stately clothing, handing out coins or shillings to those less fortunate than he, two poor men who beg for assistance.  The Golden Dawn association is unequal relationships; however this does not denote a negative situation. The scales are balanced, the arrangements are fair.

Which figure are you in the card?  The wealthy man giving of his time, money or service, or the poorer man who currently needs assistance? This is a card of giving and/or receiving, but one in which all parties walk away satisfied.  After the financial upheaval of the five, a return to financial stability is promised in this card, sixes in the Tarot are known to bring balance and peace.

If you are represented by one of the lower men in the card, it could imply that you will soon have money coming your way.  A loan you requested is approved, or you are given a grant.  You may have money coming in from some other source that is rightfully owed to you, such as a court case or settlement.  You could simply be receiving your weekly paycheck, as this is money being handed out to you by someone else in an agreed upon fashion because both parties have met the terms (time and work for financial compensation).

If you are the wealthy man in the card this can be seen as you distributing goods or services.  Perhaps someone has asked you to make them a loan.  This card indicates it will be a fine time to do so and terms will be satisfactory to both parties.  You could be the executor of a will settling an estate.  In this case you are disbursing not just money, but property or possessions as well.

This also could refer to giving of your time to others, as this is a pentacle card, it is not just about money, but about time and resources as well. You may be helping someone on a project, or giving of your resources, sharing some of your goods or services.  Giving of your time and energy in the spirit of service is favored by this card.  You could be giving back by participating in a service project, or giving some sort of service in your community.  Perhaps you are a coach for a children's sports team or youth league of some sort.

Giving back is a social responsibility that we are all called to do. This could be in the form of donating money to a charity of some sort, or it can be giving service. Interestingly, statistics show that it is not those who have more that give more.  Those who have less tend to give proportionally more than those who have more.  Is this a representation of how the rich stay rich, with the famous quote that you 'don't get rich by giving it all away?'  That depends on your definition of the word rich. It could also be that those who have less better understand the perils of those in need.

If you are the person who is giving, it is important to remember to give what others truly need, not what you think they need, what you think they should have, or what you would need if you were in their situation.  This is common, and a pitfall to beware, if you are going to give, give with a generous non-judgmental heart and give others what they truly need. It is also important not to give more than you can truly afford yourself, and not to give more than the other person actually needs.  Maintaining balance is key.

Lastly, the Six of Pentacles is a card of dominance and submission, control.  One person stands while the others kneel.  Cleary one person is in the power position while the others are submissive.  In the upright, this isn't necessarily depicted as negative, it could be that both parties have agreed to this.

This is the meaning suggested if this card comes up in a question about a relationship.  This is the theme of unequal partnerships. In the pentacles suit, the implication is that the person with more money or income is the one in the higher position of authority.  This can lead to difficulties. Many times when the card is upright it is you that is in the power position, reversed, it is your partner. 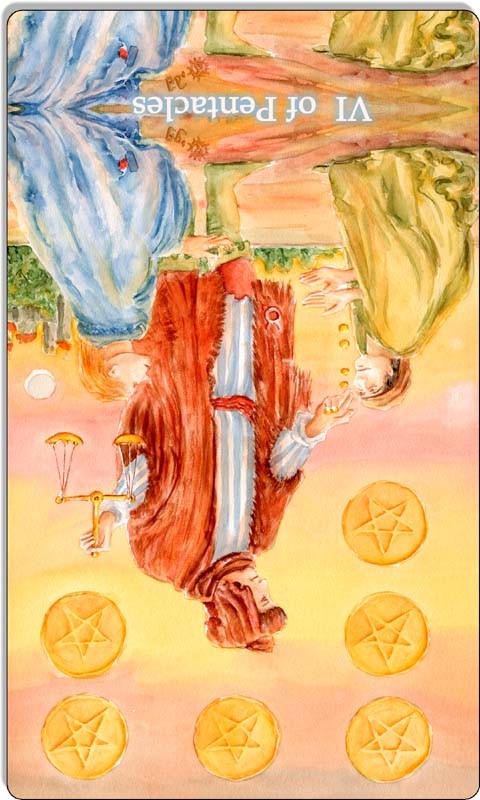 In the Six of Pentacles reversed the partnerships are still not equal, but now the scales are not balanced (or more likely tipped upside down!) and the arrangements that may have been satisfactory in the upright are no longer satisfactory.

If you are represented by the man who is kneeling, it could indicate some financial difficulty.  A loan you requested will not be approved, a grant is not given, or a court case or settlement of some type is disbursed in a manner that you believe is unfair. You could find yourself creating more debt than you can payback or manage. Now would not be the time to apply for funding for anything or to consider a job change.  This card has also come up to represent 'get rich quick' schemes. We all know the old saying, 'If it looks too good to be true, it probably is'. Do not take any unnecessary risks. Things are unstable.

If you are represented by the man who is standing, be very cautious about whom you lend money to at this time, as the implication in this card is that you will not get back what you give out, or the terms will not be agreeable or it may not be paid back in the fashion you agree upon. If you have already lent someone money and have approached the Tarot about when you will receive re-payment, it is unfortunately not a good sign to receive this card reversed.

As far as giving of your time and services, again, you must be careful.  There is a tendency to give what you think others need, not what they actually need, to give too much at the risk of hurting your own financial or physical well-being, or giving others more than they reasonably need, thus creating a dependency situation, and ultimately feeling taken advantage of.  At the other extreme, you could be withholding help from those who truly need it. Also be mindful of your purpose for giving and be certain it is in the true spirit of generosity and not just for recognition.

As a card of dominance and submission, the power struggle has now gotten out of control.  The unequal relationship theme still exists but it is no longer satisfactory, or at the very least, manageable to both parties.  One person could be feeling extremely taken advantage of, or feel that the other person is unfairly assuming charge.  This includes personal relationships.  Often with a pentacles card, the position is denoted by money, meaning the person with more money is the person calling the shots.  Often when the card is reversed, you see yourself as the person who is NOT in control and feel unappreciated or taken advantage of.