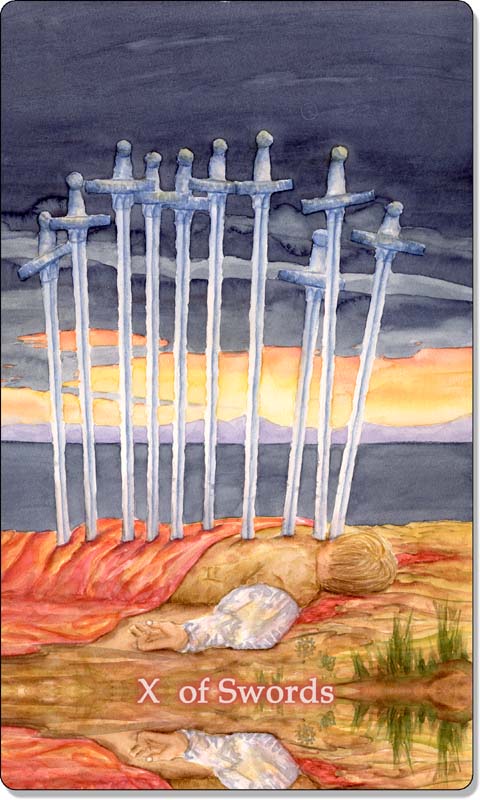 In the Ten of Swords we see a man lying face down with ten swords stabbed into his back. He is partially covered by a red cloth, and also has red blood appear to be coming out beneath him. His right hand makes the same symbol as the Hierophant. Again, as we are at the end of the suit, it is dark, the worst of the worst. The sky is pitch black. But all is not always as it seems. Upon closer inspection, the rising sun is dawning and about to crest the horizon. It is not here yet, but its golden rays are beginning to show, its light emanating upward and casting out the darkness.

In the Ten of Swords, we have reached the end of the suit, the final lessons, and in this card, that lesson is about endings. In a way, this card is similar to the Death card of the Major Arcana, and invokes much of the same feeling. We are faced with an ending that we must accept. Regardless of how upsetting this is, we don't have a choice. It is what it is. The keyword assigned by the Golden Dawn for this card is "Ruin". There is the sense that all is lost. Its astrological correspondence is to the planet Uranus, the planet of abrupt change and surprise.

Often in the Ten of Swords, we did not see the ending that was coming. We were caught off guard and when something like this happens to us, it makes it even more painful. We feel betrayed, backstabbed, many times by someone we cared about. The term "martyr" is commonly associated with this card. There is the feeling that we are in this situation because we tried to do something for someone else, to look after or care for someone else, who in the end, did not care about us in the same way, and this is how it ended. That can make the result even more painful, especially because it caught us off guard.

Another concept of this card is the finality of it. There is generally no going back. Usually, you did not see what was coming, and often do not have it within your power or means to undo the situation. This is rock bottom. The good news is that the only place to go from here is up. The rising sun, the ray of hope, is indicative of the fact that within every ending is a new beginning. This is also the idea of the ten. You have reached the culmination of the suit, and your personal situation as well. While you cannot change your situation or your outcome, you can take solace in the fact that it is over. This is an issue that has seen itself through to the end. You will need to acknowledge the finality of the situation, deal with the consequences or outcome, nurse your wounded feelings, and let it go. You can't change it, only accept it for what it is, learn the lesson it brought you and look for a new course. You can take comfort in knowing the situation has come to end, even if not how you had hoped, and that a new day is dawning. 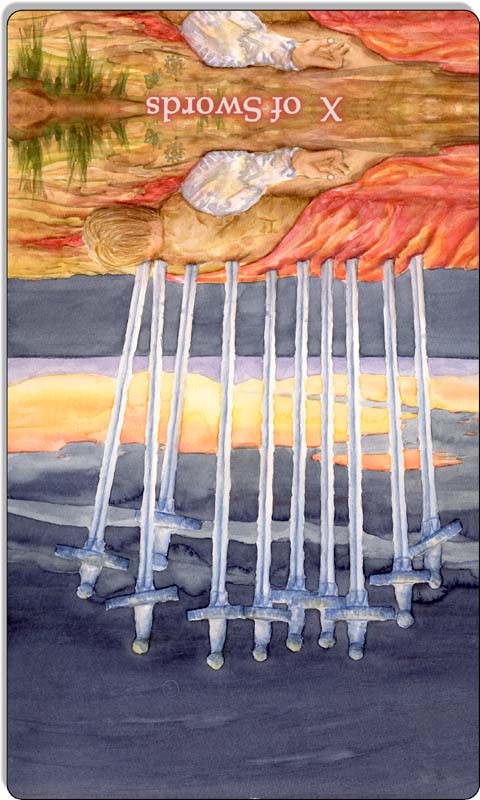 In the Ten of Swords, we see ourselves hitting rock bottom, not to our liking, and having nowhere to go but up. In the reversed ten, there are a few possible manifestations. The first, is that you averted the crisis, ruin or devastation that accompany the upright, because you were able to identify and deal with the situation proactively. Many times when a situation is coming to an unpleasant end, it is a complete and utter surprise to us, which makes the ending even more painful. But if we look closely, especially in review, we can often see that there were signs, we were just unable, or unwilling to see them at the time. If you are, you may be able to pre-empt some of the devastation, and take steps to lessen the blow. Make no mistake, the situation is likely coming to an end regardless, but you may be able to avert the disaster and crisis that often accompany the upright ten. You may recognize that something needs to change and do something about it ahead of time. You may choose to not be a martyr, and put your own needs first, recognizing that no one else is.

You may have already suffered the pain and crisis, but are now beginning to move on from it. When we look at the card, we see the ten swords in the man's back. One sword would have been enough to do the job, the ten is overkill, and suggests the depth of the painful emotions we felt about what happened to us. We may feel we were betrayed by someone. In the reverse, the swords fall out. We are beginning to see our own part in the situation, and we are also able to start to let go of our pain, anger and hurt, and start moving effectively upward to a new beginning. The sun is pushing away the darkness, we are moving on.

If we are really doing a good job mentally, we can look at the lessons we were forced to learn, and determine how they have made us different, we can use what we learned to create a better situation for ourselves the next time around. This is the time after the ordeal. Take some time to relax and de-stress mentally. Even if it didn't end well, just the fact that it's finally OVER can be a huge relief. Since this card is reversed, we can see how returning to the nine shows the profound sense of worry and anxiety. By dealing with the situation, we end the anxiety. It's over.

Finally, this card can appear when we are resisting what we know is an inevitable end. Again, this is like the Death card of the Major Arcana reversed. We know that something is no good for us, or it is going nowhere, but it is just too painful to let go of, so we are dragging it out, clinging hopelessly to what little is left, thinking we may be able to get it back. We fear the failure, the defeat, the ruin, the loss that is inevitable in this card. Again, being reversed, if we return to the nine and acknowledge all of these pains and fears that keep us up at night, we may be able to find a solution, and we may be able to let go. This is a card of endings, of finality. It is what's truly best for your soul, and is likely going to happen anyway. Just like with the energies of the Death card, and the planet Uranus as well, the more you resist the changes they bring, the more painful they are when they DO happen and the harder the lesson to be learned. Find outside help if you need someone to talk to or help doing what you have to do. It's time to let go. This could even be old thought patterns, or patterns of behavior that you are holding on to from years ago that have become baggage for you, that you don't even recognize you are carrying around. Again, having someone to talk to that can help you peel away the layers and identify the source can help you let go. This is the final card of the suit. Imagine what possibilities are available to you next in the Ace when you do!