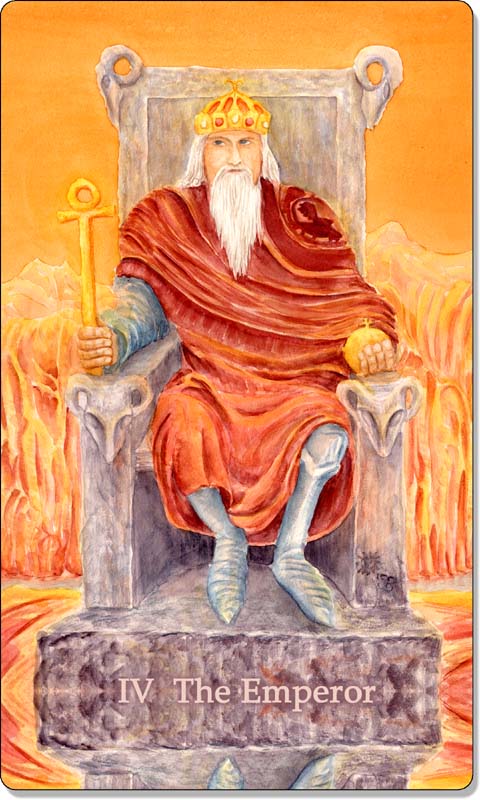 In the Emperor we see lots of red coloring, and that is because of the yang, masculine energy associated with this card. It is ruled by the astrological sign of Aries (ruled by planet Mars), so this card is all about boldly going forth and getting things done! The Emperor sits on a cube (not a block or a square), which has greater significance in geometry, relating to stability, which is inherent in this card, as it is also ruled by the number 4, the number of stability (think of four legs on a table, or a chair). He has his armor on, as well as the symbols of the ram around him, as well as the Ankh, the Egyptian symbol of Life.

He is the powerful authoritative father figure, compared to the Empress' loving and tender mother figure. He is the ruler, the leader, the one who has been in charge for a very long time, and can therefore be counted on for wisdom and stability. The Emperor loves structure, order, rules and routine. You are being told to follow the rules and regulations. This is a time that you are laying the foundations for your plans and when this card is upright, you are laying very solid, dependable foundations.

This is a very yang or masculine energy, so keep your ears and eyes peeled. It could be coming from a boss, partner, father figure or even the law itself. This is not a time to bend the rules, or cut corners. This is a time where you can get a lot of work done and get ahead if you are sure to follow the established way of doing things. The Emperor performs best when he is in complete control, and you can be assured that he definitely wears the pants. He is strict, but fair, expects much, but rewards appropriately. The idea that you get out what you put in, in terms of hard work and benefits, is embodied in this card.

You may be moving up in your career because of the hard work you have put forth or a boss that likes you. You will be encountering situations that are strongly influenced by the concepts of control and authority, but they should also be fair, so just be sure to put your best foot forward. The Emperor is a left-brain thinker, so projects that require a lot of creativity are not those that are favored now.

You, on the other hand, in fact may be the person vying for authority and control, so please don't misuse this energy. Status and recognition may be important to you now, as this is another principle of The Emperor card, but it is important that you gain these things on your own merits, through the hard work and diligence The Emperor demands. This is a GREAT time to be action-oriented and get things done, as you will have a great surge of energy to get you moving, the power and force of the Universe's energy is behind you! 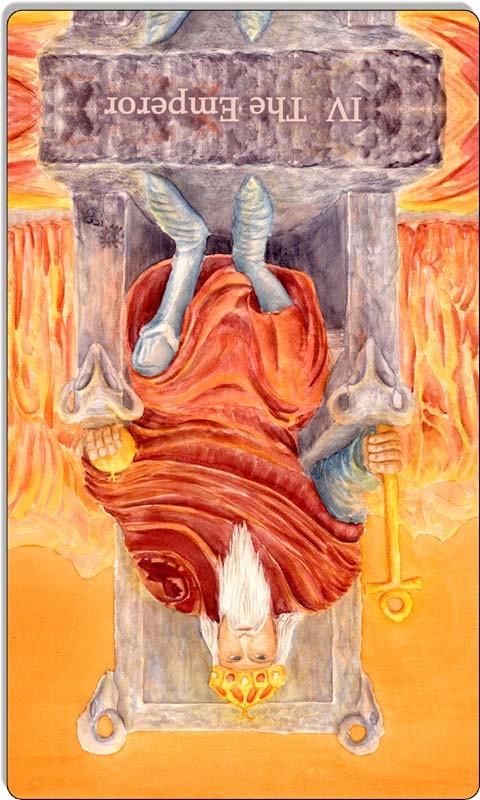 At this time, either you, or someone in your life is using way too much domination, inflexibility or authority over someone else. If this energy is being used AGAINST you, it is likely coming from an extremely overbearing male figure, whether it's a father, boss or partner. Someone's expectations are just too high and too rigid with little to no flexibility. Structure is indeed needed, but it is making you or the other person simply want to make a break for freedom.

If you feel YOURSELF acting this way to others, please take notice, as you will surely drive away whatever or whoever it is. You may be feeling stagnated at a job where you are tired of being controlled, and no longer want to take orders. Maybe you feel it is time to run your own show, and indeed, you would do well to listen to your heart, and re-find that creative spark you may have lost. In a relationship, remember that compromise is key. To get your way by force is not really getting your way at all.

Sometimes when this card comes up reversed, it is an indication that you do not have ENOUGH stability in your life. Things are indeed out of balance, but they have taken a turn in the opposite direction. Things are out of control right now, and you would do well to streamline what you are doing, and get things back on track.