The Four Cardinal Virtues in the Tarot 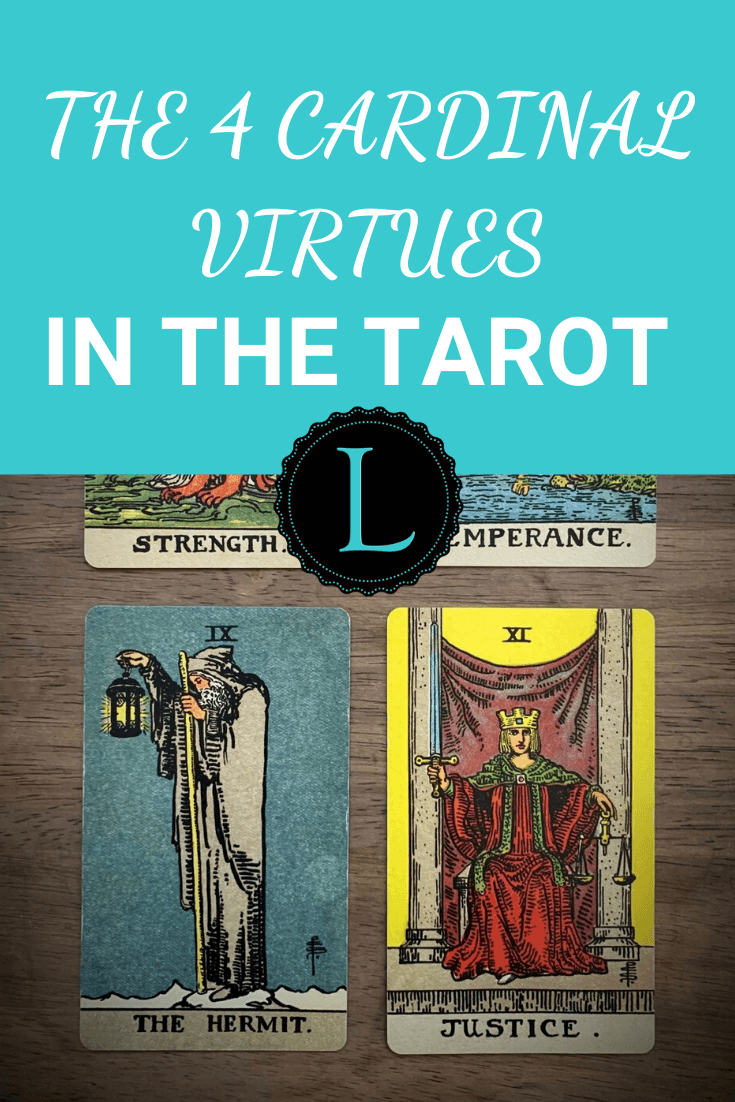 The Four Cardinal Virtues. We've all heard that term, but how familiar are we with what they are and how we practice them? The four cardinal virtues were first proposed by Plato in The Republic and were used to describe the qualities that would make a good city. 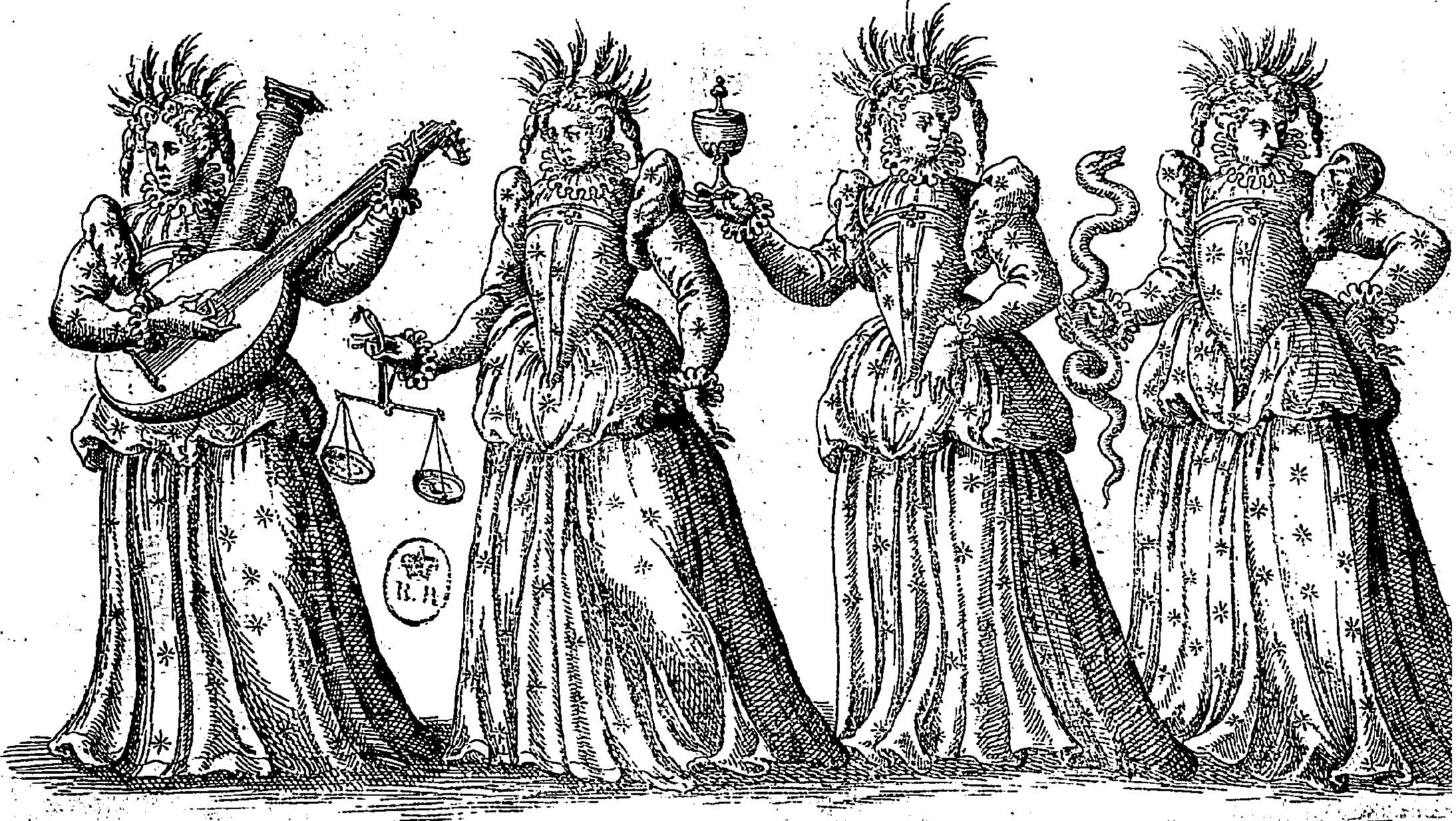 What are these four cardinal virtues and why do they matter? Well here they are:


As you can see, these are also Tarot cards, go figure! Why wouldn't our four cardinal virtues show up in the Tarot? Even the three theological virtues of hope, faith and charity can be found in the Tarot as well, but that is for another article.


So two of these virtues are clearly obvious which cards they go with, one is fairly obvious, and the last you may be wondering where we find it. So let's get into that shall we? Temperance and Justice are virtues that we have cards directly named after. Fortitude is disguised, but easily recognized as strength. The last one that calls for a little more discernment, Prudence, is hiding in plain sight, this virtue is found within The Hermit. 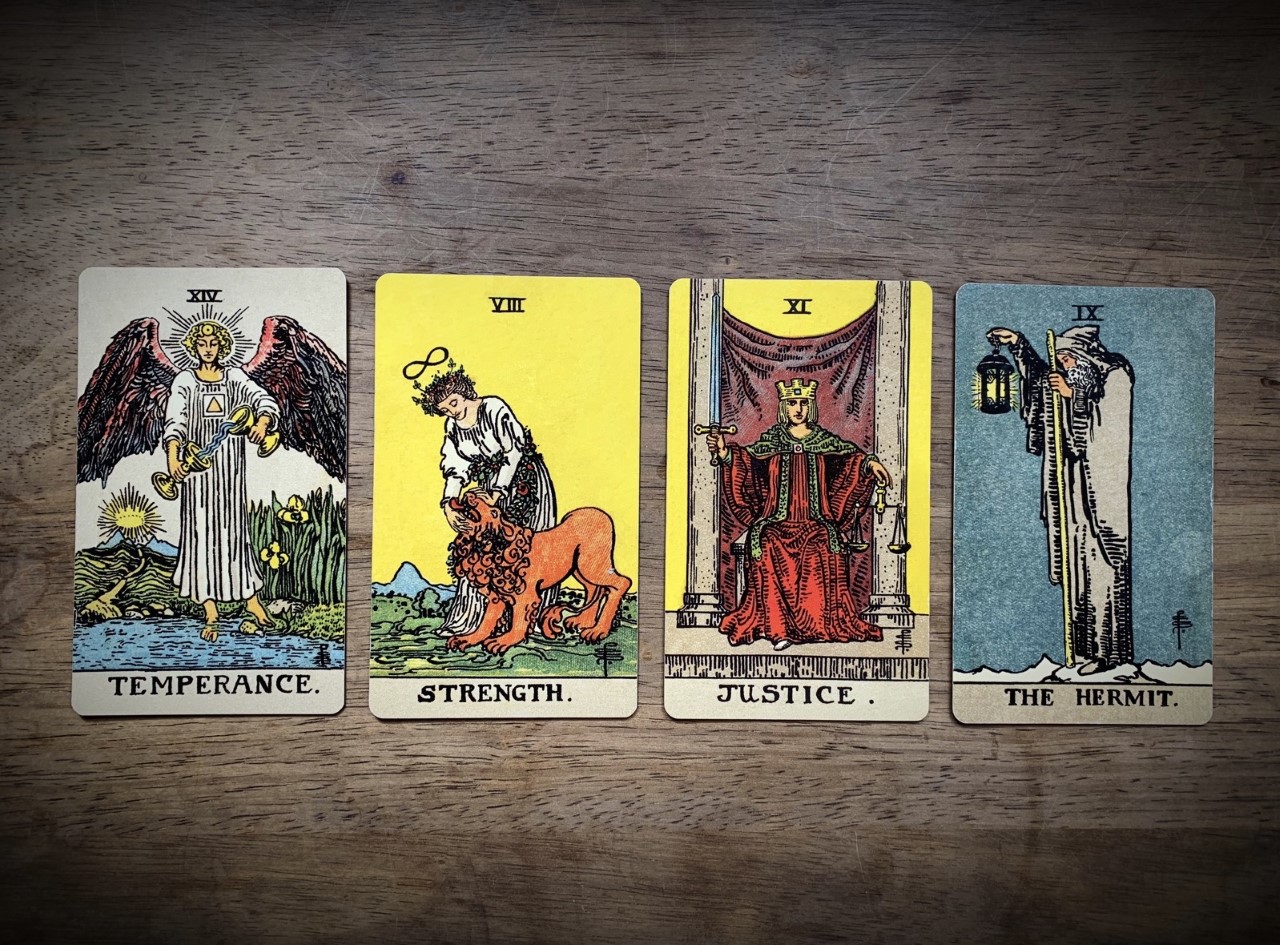 You may also be wondering why this matters. The Tarot holds many mysteries for us to discover, and in the four virtues, we have our aspirations, our character traits to live by if you will. Again in Plato's theory, these virtues are the bedrock of good character. Let's discuss them. 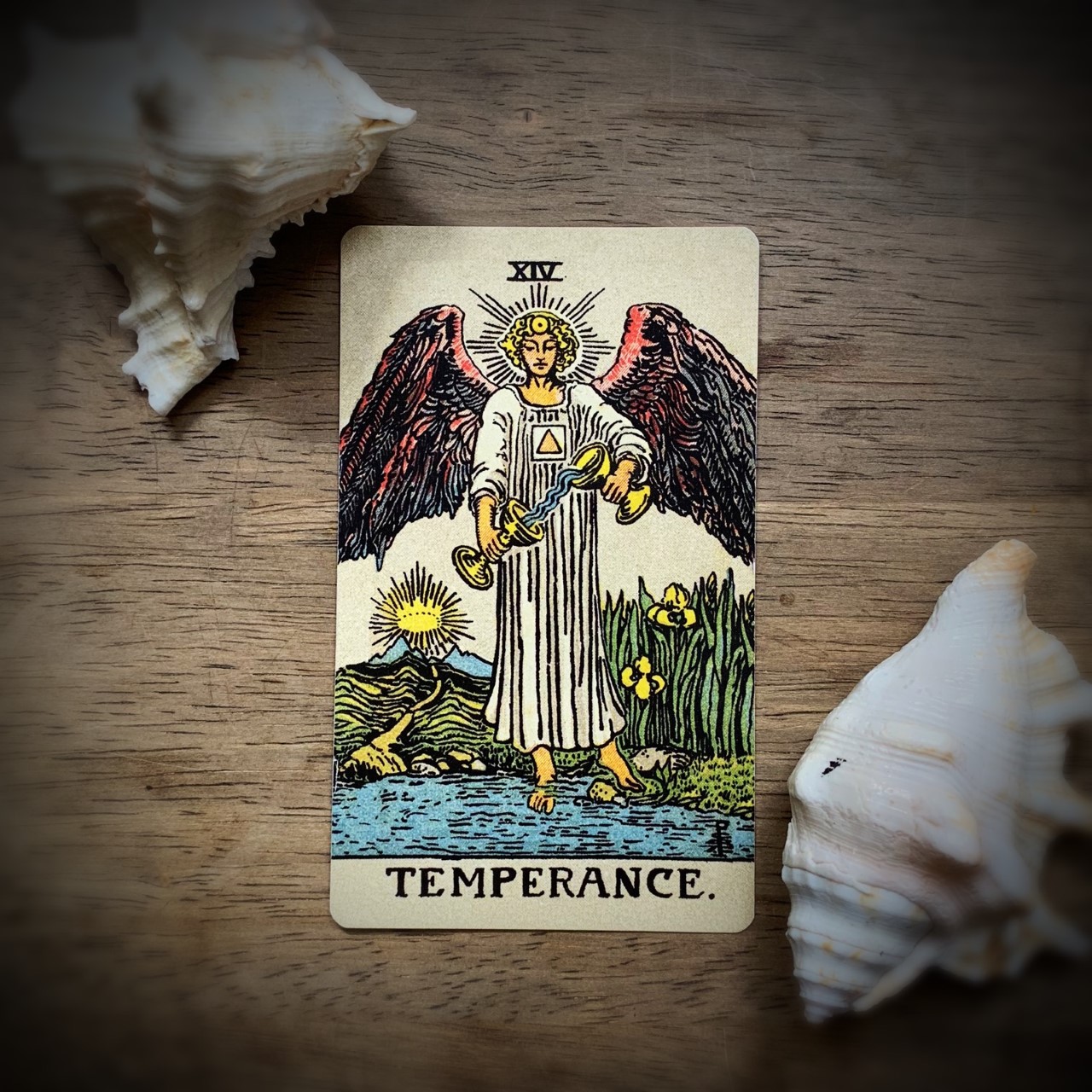 The cardinal virtue of temperance shows itself in the Temperance card. The virtue of temperance is described as practicing self-control, restraint, moderation and sacrifice. It is choosing to do without something or to moderate what we have in order to benefit others. Among some of the symbolism for the image of this virtue, is a woman holding a cup or water, and wine, in two jugs.


Let's take a look at our Temperance card. Here we see a figure holding two cups, pouring the liquid between the two. In Temperance, we are attempting to "temper" something. That is, to dilute, qualify or soften something with the addition of something else. Temperance is about rectifying extremes, looking for the middle ground, finding homeostasis.


We are attempting to blend and balance things, in an attempt to reach that same state in our lives. Not to be in extremes or excess, but to always be moderate. "All things in moderation". When things are too extreme, either in one direction or another, we are off center and off balance. Temperance asks us to bring balance back to our lives.


People often equate this card with the term "patience". I don't find that to be the end-all-be-all of this card, but I'm pretty sure this is the card (and virtue) people are unknowingly referring to when they say "patience is a virtue!". What do you think? When we find ourselves out of balance, patience can be a key component of what we need to practice as we diligently attempt to bring balance back into our lives. It can be frustrating. Patience is likely something we all need to cultivate more of, and a critical reminder as to why temperance is a cardinal virtue, meaning a virtue consistent with the bedrock of good character. 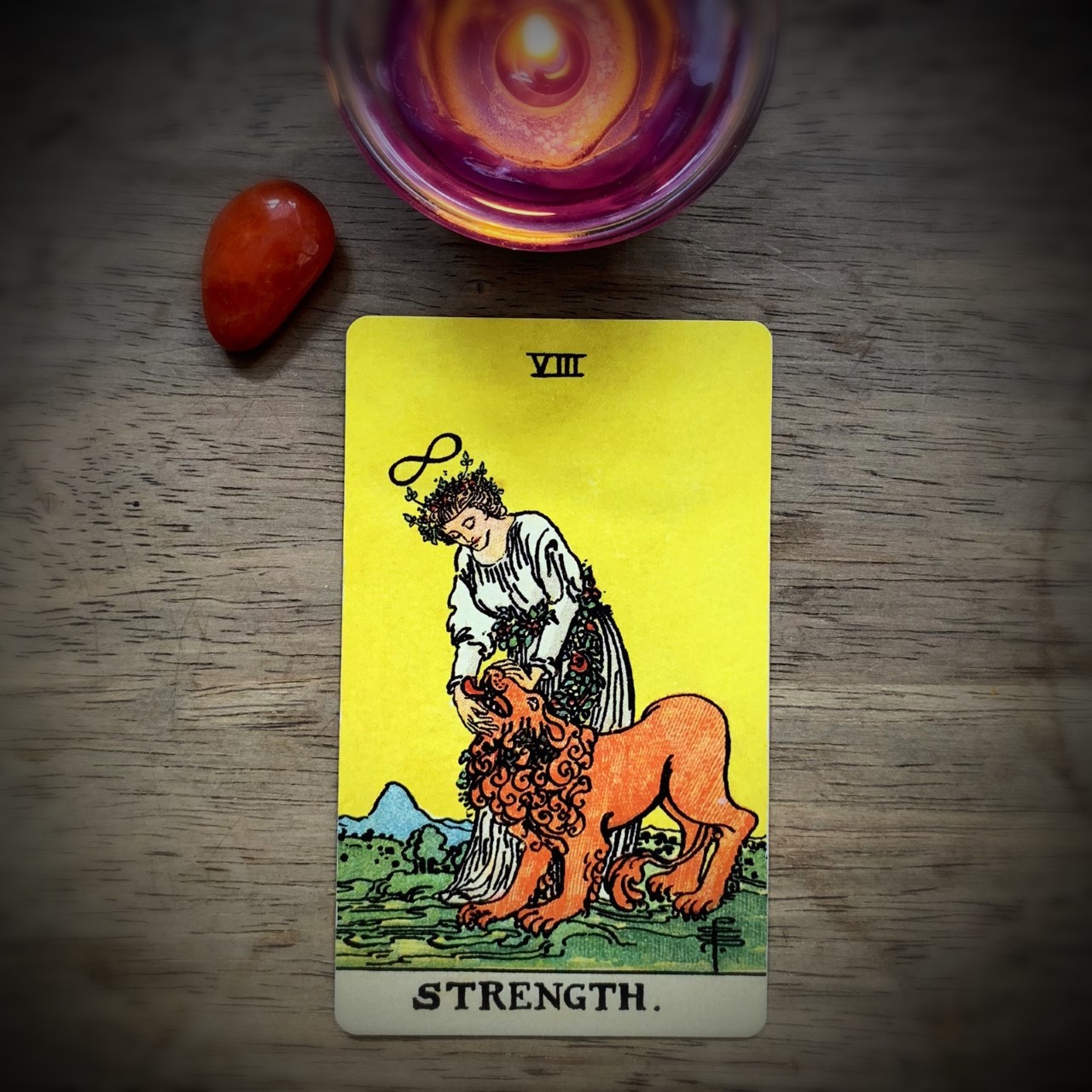 The cardinal virtue of fortitude shows up in the Strength card. The virtue of Fortitude is described as strength, forbearance, and courage. It is the virtue of trusting that what needs to be done, will be, even when it's hard or we are fearful. This includes confronting fears or uncertainty. It asks us to have faith that others will keep their promises, and follow through on things. The symbolism for this card includes armour, a club and a lion. This virtue was assigned to the warrior class of people.


Let's take a look at our Strength card. Here we see a woman, subduing a lion, as depicted in the images of the woman symbolizing fortitude. In our strength card, we are often told that it is not a card of physical strength but of other types of strength. Not necessarily mental, but strength of character, conviction and again, courage. When Strength appears, we need to be prepared to do hard things, handle hard things and put in the "hard yards". Often when Strength shows up, it is talking about our physical, mental, emotional AND psychological fortitude.


The woman in the card subdus the lion not with her brute strength, but with her will. This card exemplifies confronting fears and trusting that what is meant to be will be. Strength takes the long game. Every good warrior knows that it is one thing to win the battle, it is another to win the war. With Strength, there are no "quick wins".


This card is about discipline, foregoing immediate gratification for long term gains. This card is about the strength of our will and our ability to get done the things that need to be done, even if they will take time or seem impossible. Petting a lion into submission? Yes. 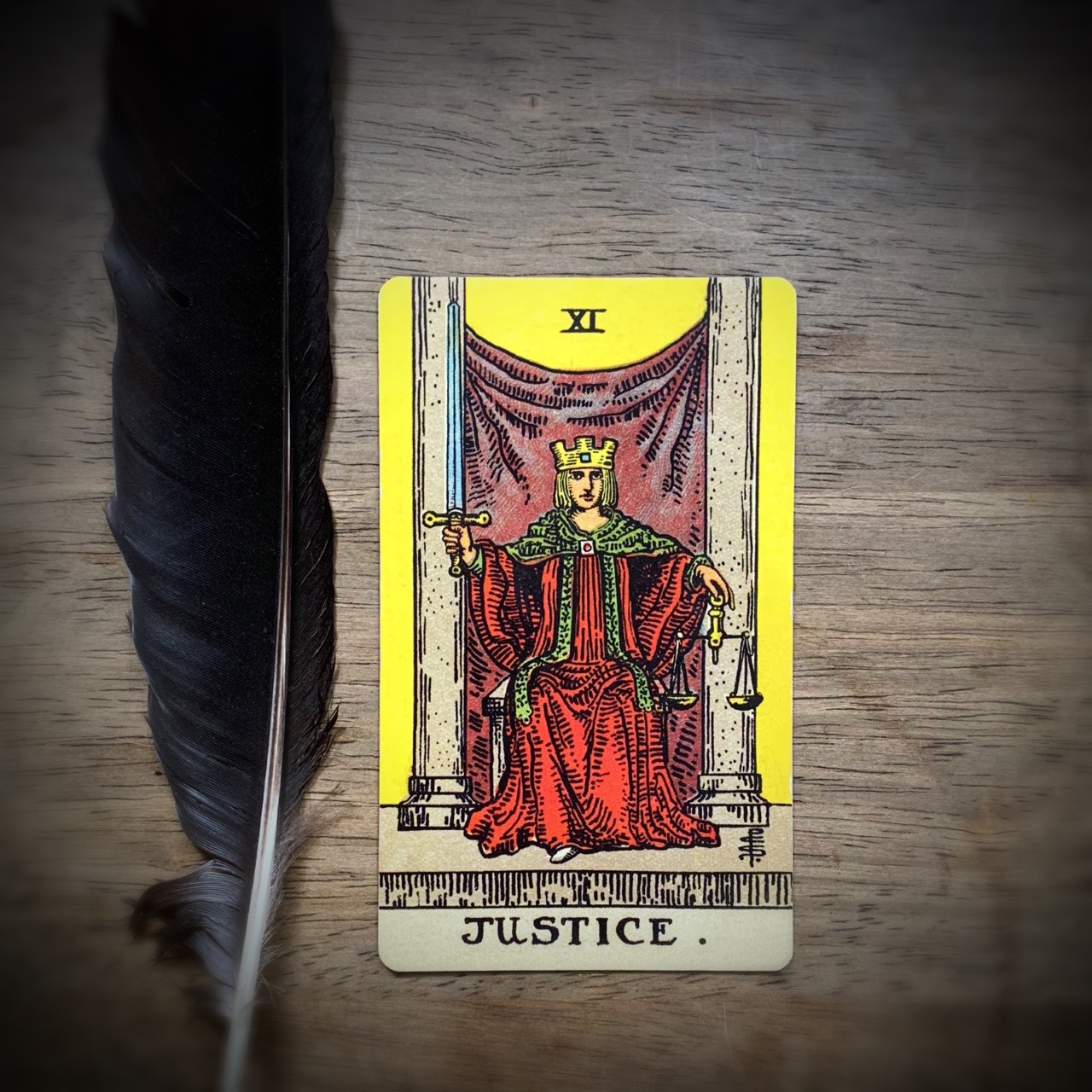 The cardinal virtue of Justice is present in the Tarot as our Justice card. The virtue of Justice is described as fairness, righteousness and most importantly, it was considered the most important virtue. This one did not apply to any one class of people, and actually stood apart, outside of the class system, and rules the relationships between the other three. In the depiction of Justice as a virtue, we often see the woman holding a sword or scales and with a crown.


What do we see in our Justice card in the tarot deck? We see these very images, a woman, seated, who holds both a sword and scales, while wearing a crown. Within the justice card in the tarot, as well as the virtue itself, the core meaning is that we are called to be just. Meaning, we are to do the right things. We are to live in integrity, keep our word, and be fair.


Being fair is expected of us when the Justice card shows up. It is about living in integrity, doing what we know is right, even if no one is looking, even if no one else would know any better. Justice isn't about whether or not we win our court case. It is about whether or not Justice will prevail. This card could turn out in a reading and a court case lost, if that is what was FAIR and JUST. Do unto others as you would have them do unto you.


This is a card of truth and honesty and it is obvious why Plato considered it the most important virtue. If we don't have truth or integrity, what do we have? No man is outside of the law, particularly the laws of humans, and how we should treat other humans. 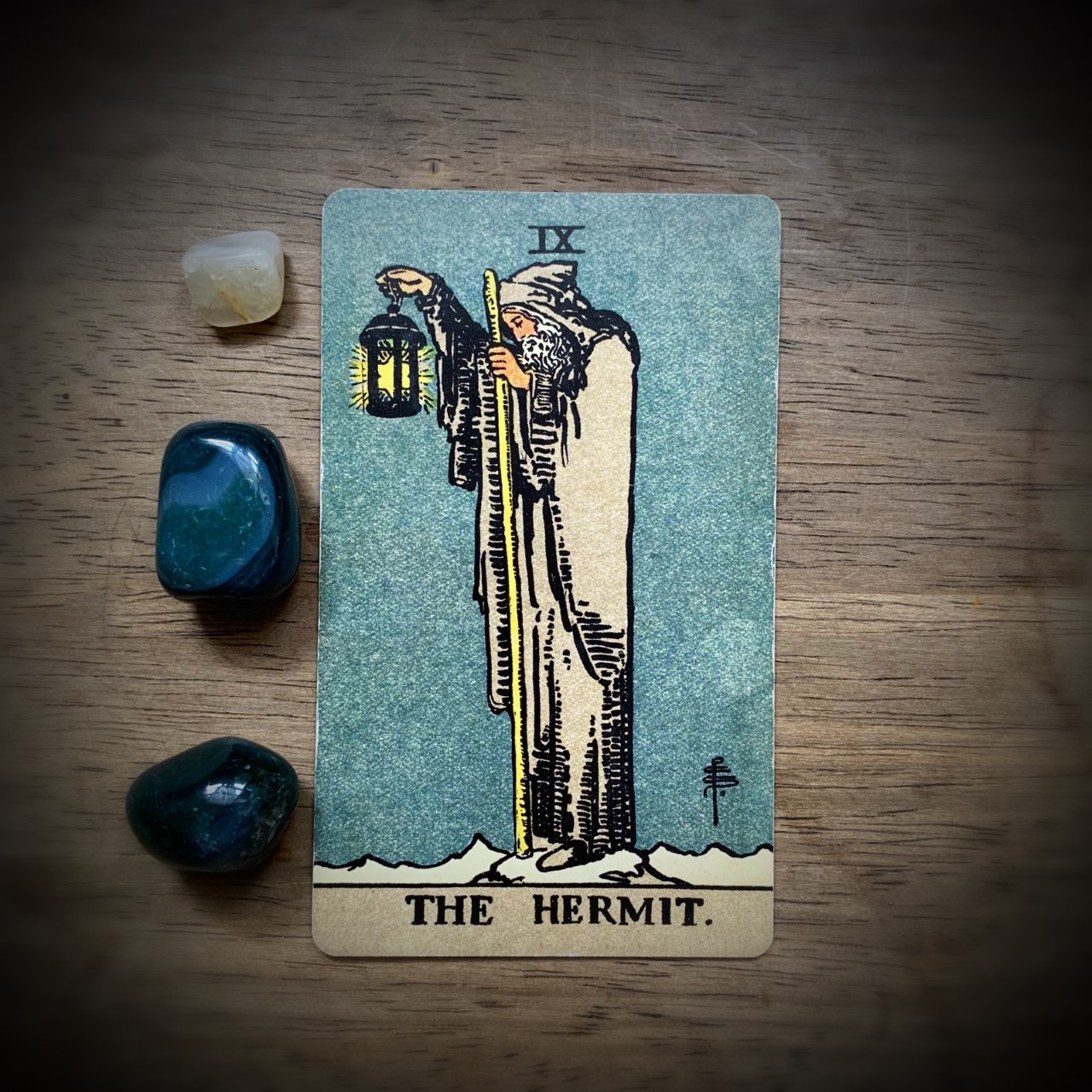 Finally we have found our way to Prudence. This is one of my favorites. We find the virtue of prudence to show up in The Hermit. This makes sense since another way this virtue is described is wisdom. That which the Hermit certainly possesses. Prudence is the ability to discern what is the proper or correct thing to do in a given situation. It is also the wisdom to critically analyze along the way and make corrections to the course as necessary. Prudence is to be mindful and timely. These are also both associations made to the Hermit.


Prudence is often associated with a book, a scroll or a mirror, and sometimes a serpent as well. Serpents are synonymous with wisdom, another indication of the connection between prudence and wisdom. This virtue was assigned to the ruling class, as reason and intellect were considered traits for the rulers. There has been some confusion as to the tarot card this is tied to, and with the book and scroll along with wisdom, there is a good case for the High Priestess, but with a deep dive into the deeper foundations of prudence, I firmly believe it is found in the Hermit.


In prudence, we are choosing what the right means are to get to the proper end we are trying to get to. The Hermit is the sage with that wisdom. Often it is inside of ourselves and we are going within to look for it, relying on our own moral compass. Another reason the Hermit is associated with solidarity. The Hermit is wise enough to avoid shiny object syndrome, in favor of things that are hard yet will get us to where we are ultimately trying to go. Prudence, and the Hermit, are about responsibility, hard work and perseverance.


In each of these four cardinal virtues, we have a corresponding card, and with that, a corresponding astrological sign. We can see some of the attributes of the virtue in the sign that it rules. We'll keep this brief.


Temperance- this virtue is found in the card of Temperance and is ruled by Saggitarrius. Sagg is such a free-loving, free-spirited sign, a traveler, but also a healer. This is where the association is, to temper something is to continue to mix and modify, to use alchemy to achieve a glorious result. This is just what our healers have done for thousands of years through medicines and tonics of all kinds. Working tirelessly to create the right blend of concoction, to bring the balance back to our bodies.


Fortitude- This virtue, found in the Strength card, is ruled by Leo. Leo is the magnificent Lion, ruled by the Sun and called to stand mighty, strong and proud. Even when times are tough, or we are frightened, Leo asks us to be brave and powerful.


Justice- This virtue of the same named Justice card is ruled by Libra, the card of the legal system and all things fair and equal. This makes perfect sense since Libra is all about balance. It is the sign of relationships and partnerships and all things considered "equal".


Prudence- This virtue, found in the Hermit, is ruled by Virgo. Prudence lines up beautifully with the qualities of Virgo, unlike the qualities of the Moon which rule the High Priestess. Virgo is hardworking, responsible, diligent and steadfast. There is attention to detail and a quiet determination to consistently work in the right direction to get things done.


So there you have it, these are our four cardinal virtues, the Tarot cards they accompany, and even what astrological signs they live in harmony with. But more importantly, we have the qualities in these cards that show us WHY each of these traits are virtues, WHY they make up the foundation or the bedrock of good character in each of us.


How do you feel about these virtues and corresponding cards? Do you feel they make up the most important parts of our character? Why or why not? I'd love to hear from you and would love to hear your opinion about it over in our fb group, Tarot for the Modern Reader.


Join us in our Facebook group Tarot for the Modern Reader right now! 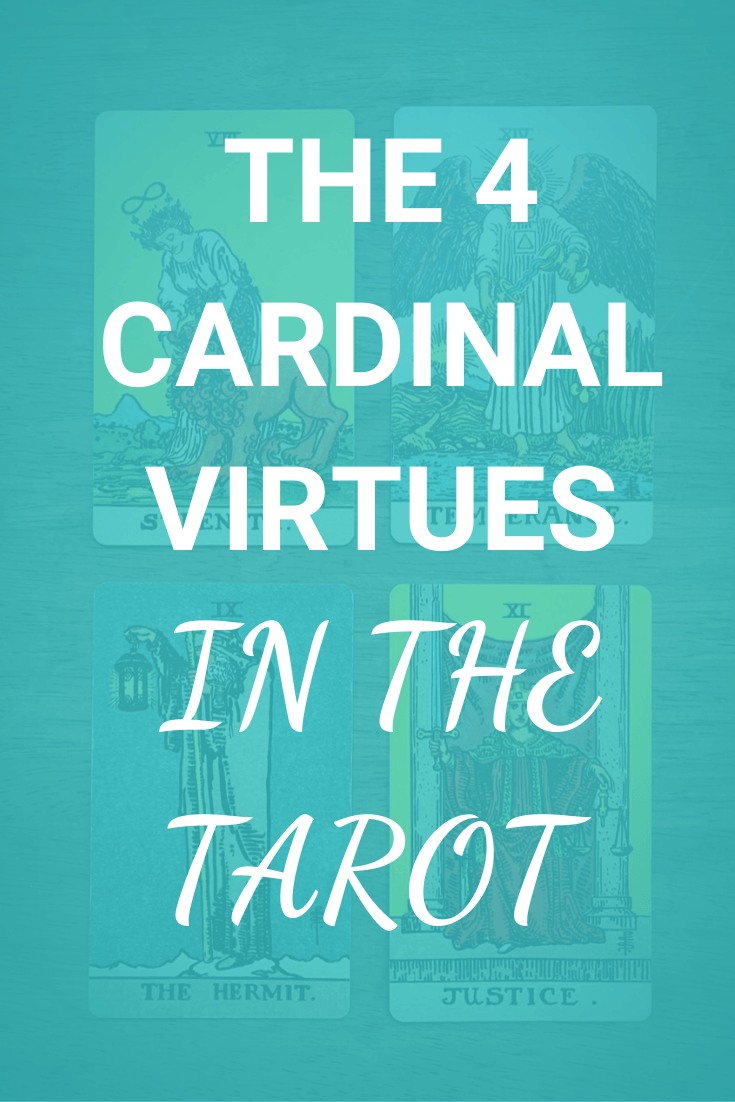 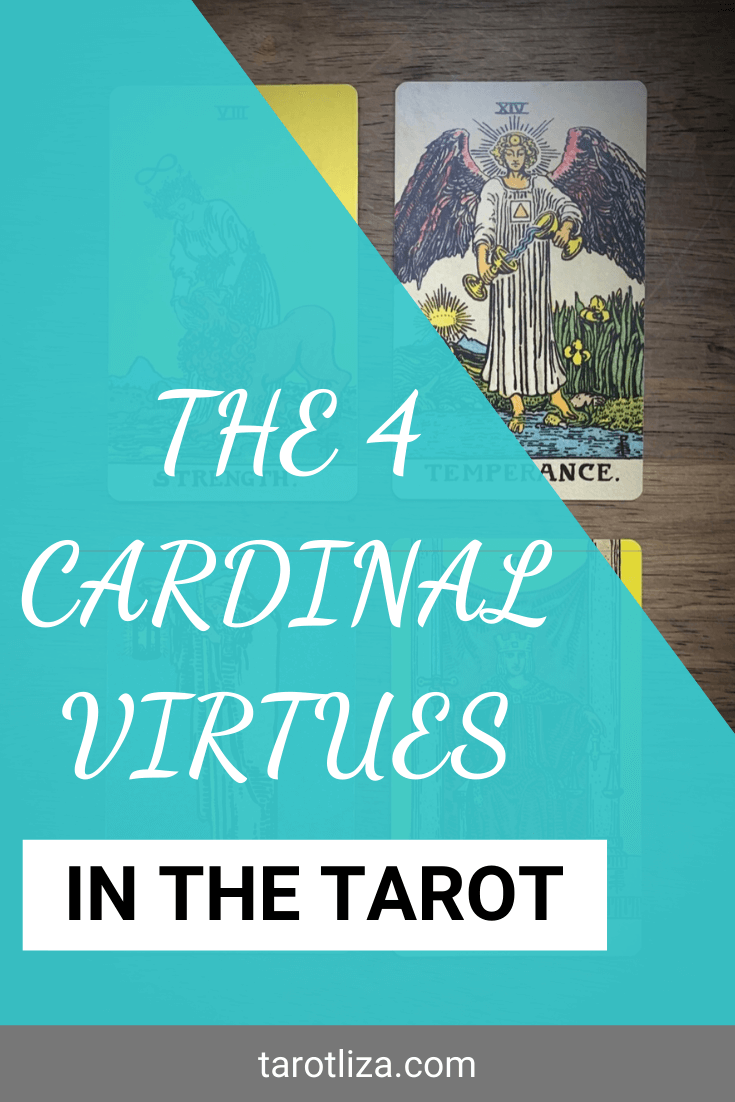 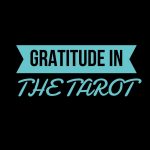 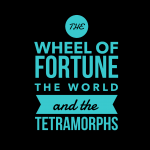 The Wheel of Fortune, the World and the TetramorphsBlog