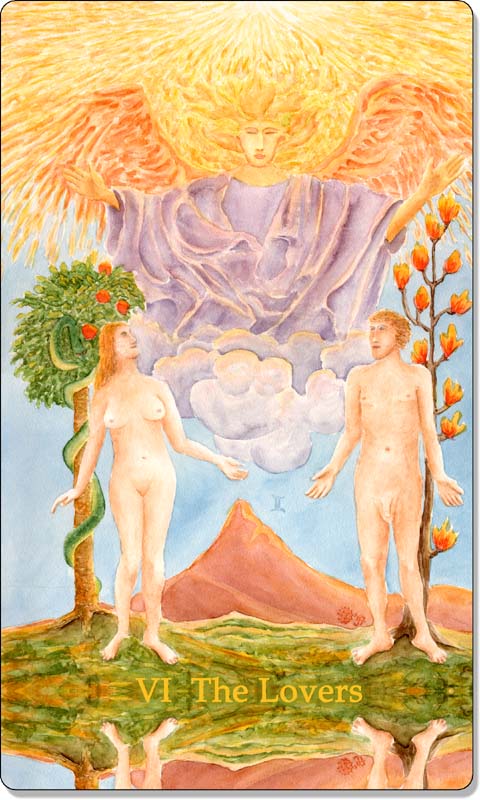 In the Lovers card, we see an Angel, presumed to be Archangel Raphael, presiding over, and appearing to give his blessing to, a man and a woman. The card depicts a scene from Adam and Eve, whereby the people appear naked, in what appears to be the proverbial Garden of Eden. This is a card that is rich in Christian symbolism. In modern interpretations, this card bodes well for love relationships, and is in fact, a card that one hopes to see when a question of relationship is posed.

This card goes much deeper than other cards of relationship, such as those in the suit of cups, because this is a Major Arcana card. The relationship in reference here is important, a marriage, a strong bond between committed partners and at times, this card can indicate the presence of a soulmate. The strong feelings you feel for the person in question are not merely infatuation or lust, they are very deep. You may have either recently entered into a new relationship, or are wondering whether or not an existing one is worth taking to the next level. The appearance of this card assures you that this relationship holds real value for you and should not be taken lightly. This card is about important unions, one which may be spiritual or karmic in nature; the partnership may feel fated, and indeed, you may be reconnecting, or going further with someone with whom you share a past life connection.

The element of Choice is also present in this card. Many years ago, this card featured a man, in between two women, the "fair" one (blonde and pale skinned), and the "dark" one. She had dark hair, dark eyes, a mysterious way about her, and was generally considered no good. The man was essentially making a choice between good and evil if you will, purity, and well, you know…. the one his mother and the townfolk would likely not approve of! In today's world, the element of choice can show up in many ways. Indeed, you very well may be deciding between two suitors, or you may be simply deciding whether or not your current partner is a good match for YOU. If you are not feeling any question about your current partner, then you may want to take this as a sign that things are as they should be, and it may be time to take it to the next level!

Now in matters not related to love, I see this card come up when you have an important decision to make. This card also represents our personal value systems, so we move deeper into what is right, and what is wrong, as in the case of the man choosing between the socially acceptable fair woman, and unacceptable dark haired one. The decision you are making is important and you probably already have some idea of what you really should do. This is one of those situations that it is very important that you take the high road. The decision could lay heavily on you, as sometimes the choice is made for you, and sometimes not. Again, you must choose wisely, but let me mention that you will more than likely have been given clues by the Universe as to which way is the best path for you, though it is not always the easiest way. You will feel it in your gut.

I mentioned earlier that it may be that you are deciding between romantic partners, or simply whether or not to move forward with one particular partner, but keep in mind that this could also be any type of decision that may have been on your heart for some time including a business partnership, or any other area where you simply need to make a choice. This card is ruled by Gemini, the sign of the twins, so where there is one, there is always two. That is where the concept of Choice comes into play with this card. Choose wisely, as a Major Arcana card, you are dealing with some very important issues. 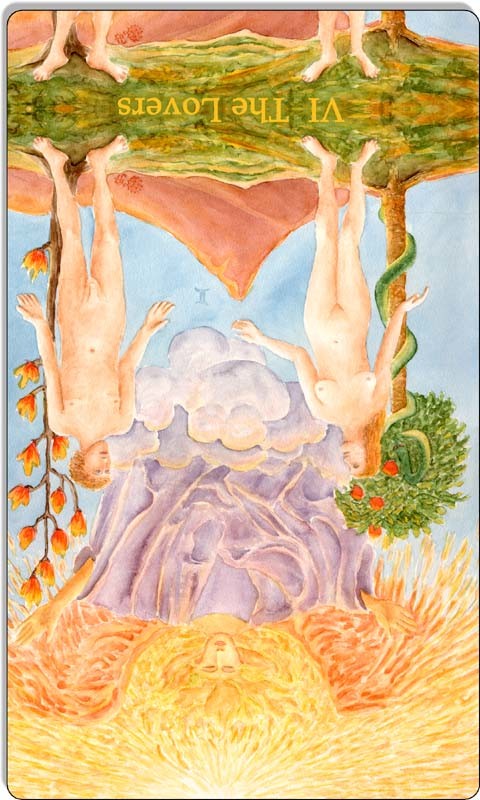 In the upright card, we see partnerships, unions, and decisions. In the reverse, there is turmoil in each of these areas. You may be making a very difficult decision or you may have already made a bad decision. This could be in a relationship or in any other area of your life. In either case, considering the advice of wise counsel, and taking personal responsibility for your choices are highly advised at this time.

That could mean seeking an ear to listen, such as in confession, it could mean going to couples therapy, seeing a counselor, or simply talking to an older and wise trusted person. In a relationship, there could possibly be a serious imbalance. One person is giving more than the other, or one person may be more interested or invested than the other.

You could find in an existing relationship that while you were once on the same page, you are finding that the relationship is degrading and you are no longer looking at the same long range goals, plans or ideas. Unfortunately, this card reversed in a relationship reading could signify infidelity, but I would look for other cards to confirm that such as the Knight of Cups reversed, the Three of Cups reversed, or the Seven of Swords. Again you may need to seek out wise counsel to weigh your options and decisions carefully as they will be significant. A separation of some sort is possible, either in a relationship, a work partnership or some other area of your life that is no longer serving you well.

In matters relating to a choice that needs to be made, this card shows the indecision and stagnation surrounding you, and your ability, or inability to make a decision. It has been said that the most important thing to do, is to "unstick" the energy by MAKING a decision, right or wrong, good or bad. The Universe will always provide you ways to make adjustments and tweaks to your plans as you go, but it is important that you get going.