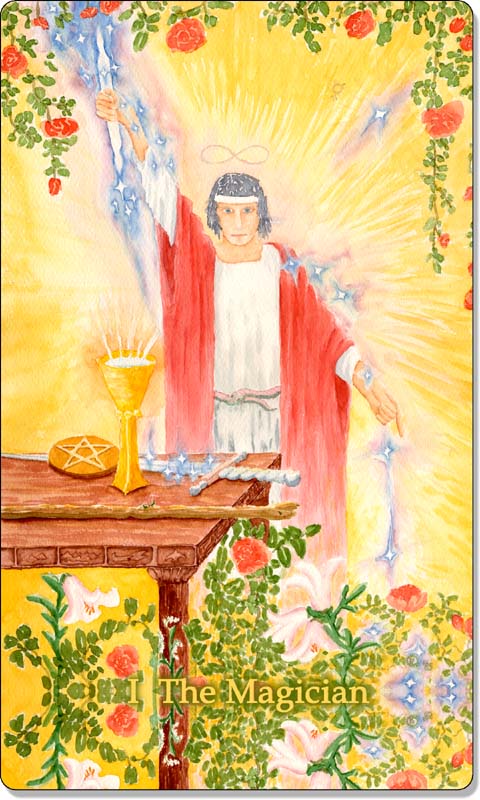 The Magician is characterized by all things mental and of manifestation. The Magician is very cerebral and symbolizes focused intent and sheer will power to manifest wishes, desires and plans. He is typically seen with one hand up, and one down, pointing to both the Heavens and the Earth. He embodies the principle of "As Above, So Below" and is considered a bridge between the realms. He has the ouroboros around his waist, as well as the Lemniscate above his head, symbolizing unending power. His red robe is another symbol of his direct power.

What does this card mean in a reading? You've got the power! No really, you do. Right now, you are in a unique position to bring about the changes you desire, the results you are dreaming of, and the outcome you deserve. You have a toolbox that I bet you don't even know you are carrying, and it is packed with everything you need. Whatever it is you are working on, the Universe is giving you a Cosmic YES to takeoff! The trick is in the work. The opportunity will not manifest itself. The raw skills and abilities are there, however you now need to put action behind opportunity, and the Magician, who is also the alchemist, is just the person who will translate ideas into action.

All things are set to improve, or take form, when this card shows up in a reading, so long as you are willing to put in the work. The Magician is associated with the planet of communications, Mercury. Therefore he is associated with skills, intellect and logic and fact based reasoning. The Magician is strongly associated with manifestation, and to a degree, Creativity. This is a time that, if you have a project or a goal that you really want to see happen, you are in a position to bring it about.

Manifestation is a key component to the Magician, and you must focus on your goal, concentrate on specific actions and bring it to fruition. This card symbolizes your ability to do so, and to have the tools within you that you need to do so as well. Communications are your Ace. Word of mouth opportunities or asking around in the circle of people you already know is a trick that belongs in the realm of The Magician (Mercury).

Another secret to the Magician is in the tools that he holds on his table. They are often everyday objects, and in this case, you do not need to go out and buy specialized items or come up with a fancy plan. Look to your everyday world. What do you already have that you can use? Who are the people around you that can help you with what you are working on? When the Magician appears, it is a sign that you are meant to take Action, and get the ball rolling. 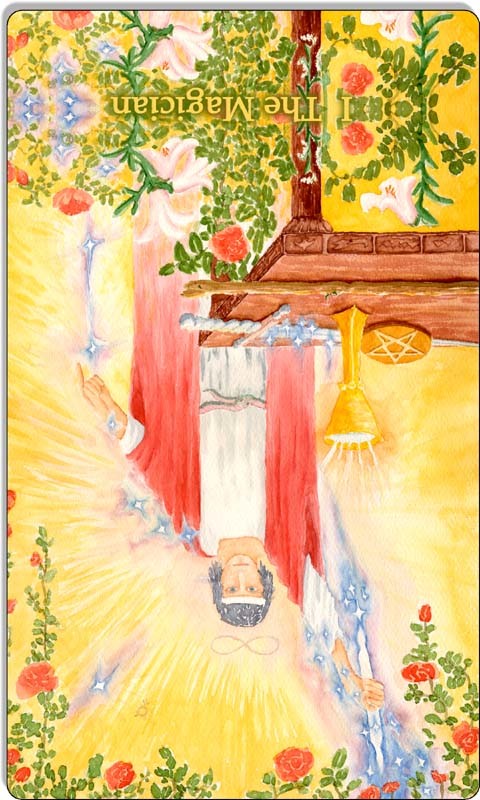 Communication channels may be down. You've got the tools to manifest a miracle, but do you know how to use them? Creative energies may be blocked this month, as well as the ability to effectively communicate with others or effect action. Choose a goal, and re-assess where you are at. Does your project need more fine tuning before you move forward with it?

Many times this card says that you are not ready to move forward yet. This is a good time to go back over things with a fine toothed comb. It could also be that you have a talent (a key word for the Magician) that you do not recognize you have, or you don't realize you are as talented as you actually are. This is typically referred to as a Bright Shadow.

In terms of communications, find a way to direct your energies and channel your focus to get your message across as clearly and concise as possible. Your message may have difficulty being received by others; don't fret, stick to your guns and keep pressing on. When the Magician is reversed, trouble hearing each other, or understanding each other's opinions are quite common, similar to a Mercury Retrograde. We experience car troubles, computer glitches, lost emails and dropped calls.

This is a time to commit to reviewing work that you have previously put in, and being extra conscientious in your communications with others. As a person, he is the trickster, and not always in a jovial prankster type of way. He could be out to deceive you or manipulate you into doing what he wants, or trying to get you to buy what he is selling. Again, look over things very closely.