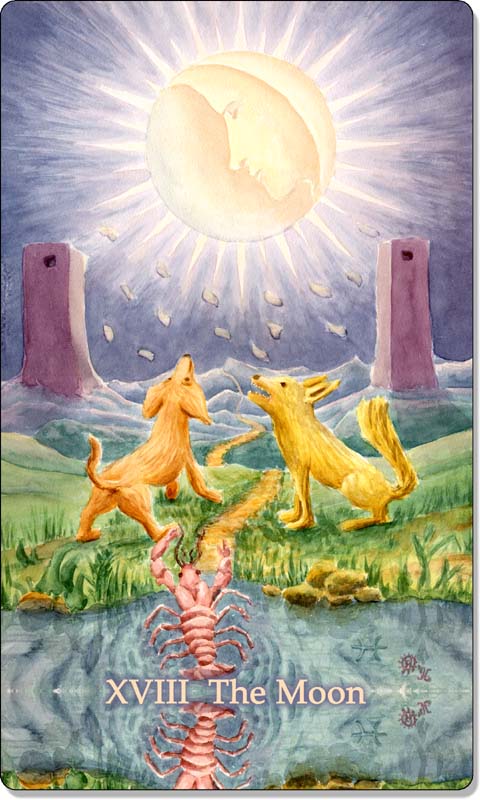 With The Moon card, we see a large Full Moon, depicted as an Eclipse in the RWS, with both a dog and a wolf howling at it. The Dog and the Wolf are said to represent both our tame, and animalistic nature. Even the crayfish coming out of the water is said to represent out most basic self. Illusion and/or delusion are associated with The Moon. The problem with illusion is that you're not sure if what you're seeing is actually what you're seeing. The problem with delusion is that you're not sure if what your thinking is factual based on the illusion you may have created or you have been led to believe.

The Moon does not have its own light, rather it is lit by the sun, and that reflected light is what we see and receive. It is not direct light, and therefore, it is not bright, things are not clear. Just consider what it means to see something in the broad daylight versus by the light of the moon. Keep in mind that some things may not be as they seem. Don't take everything at face value, and do not underestimate the value of your gut instincts and intuition. You could be seeing things unclearly because you are deceiving yourself, not wanting to see the truth in a situation, or you could be flat out being deceived by someone else about something. Look to the New Moon for more information and the Full Moon for clarity, a time where the matter in question will come to a head, and typically the truth is revealed.

The Moon is closely linked to the High Priestess, as they are both associated with Water signs and planets, making them intuitive by nature. Indeed, the scene depicted in The Moon card is the very scene we saw behind the High Priestess' veil, between the pillars. We are closer to tapping into the secret knowledge and mysteries, both attributes of The High Priestess and The Moon. The Moon card urges you to listen to your inner voice, your gut feeling, and follow your intuition. Keep all antennas up and attuned, nothing is as it seems. 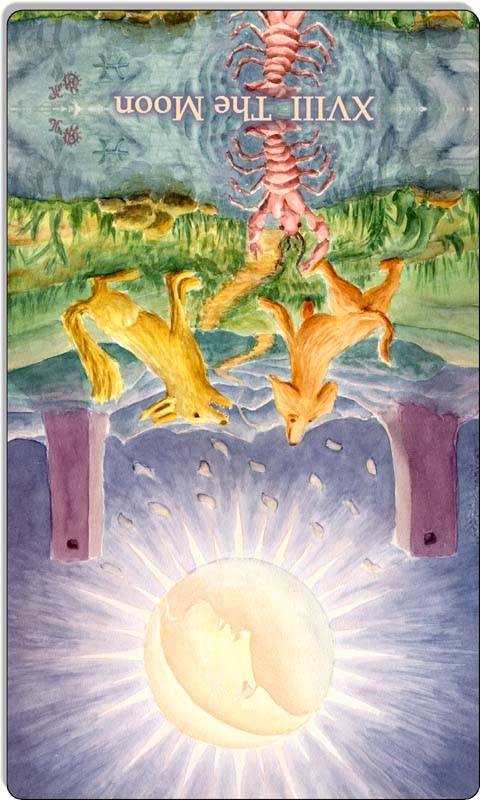 The difficulty with the reversed Moon card is basically a denial of what the Moon offers. The Moon is the card to represent psychic gifts and other intuitive abilities. With the reversal, your attitude about these things could be blocking your abilities or denying your gifts. You could be only using fact based data or logic and reasoning and simply denying the spiritual wisdom you should be seeking. You could be denying your shadow qualities, and projecting them onto others. The reversed moon is also associated with mental health issues, and naturally includes "lunacy", and being over-emotional, or seeing others this way. Additionally, secrets or things that were to remain hidden may come out when this card appears reversed, under the light of the Full Moon, things will be revealed.