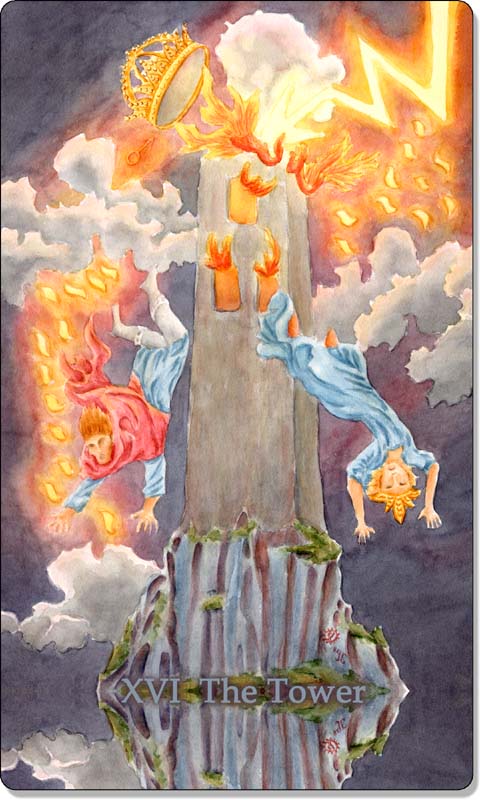 In The Tower card, we see a large tower with the top that has exploded off of it, or suddenly erupted like a volcano. The people in the tower, who were unprepared and did not see it coming, are now plummeting out of control. This is the energy that The Tower card brings to a reading. In some area of your life, there is a crisis that either has just occurred, or is about to occur.

If this card comes up in a future position, it would be wise to take a look around and see what you can do to prevent this. There is something going on that is not serving your highest good, and it needs to change. It takes change to move a stagnant situation in any direction. With The Tower card, it is explosive dynamic change.

If you refuse to deal with a situation long enough, the Universe will eventually bring it to you to deal with in a way that you will likely not enjoy. Sometimes this is brought on by an event or a person, either way it may be a situation you have been avoiding as it has seemed too painful to deal with. It will likely be difficult and unwelcome, but remember, the Universe brings us the changes we need, not necessarily those we desire. Think of it this way, until an unstable situation erupts, it is like a boiling kettle. We all know how difficult it can be to live at the boiling point, constantly on edge. Once it boils over, the tension ceases.

We have a whole new set of actions that we need to take in order to start putting it back together, but the crisis, either in reality, or that we felt internally, is over. In the aftermath of the Tower it can be restructured for the benefit of all the parties involved. This card is ruled by Mars, the masculine planet of both action and aggression. Suppressing or holding The Tower off is really not an option. If you see this card, it is usually your last warning to do something about your situation proactively, before you are going to have to handle it re-actively. This card is about the sudden and usually, unexpected release of pent-up energy. With this card, we have a clearing of the decks. The best course of action is to roll with the punches and work with the energies, as the lessons you learn will be much easier if you do not resist them. 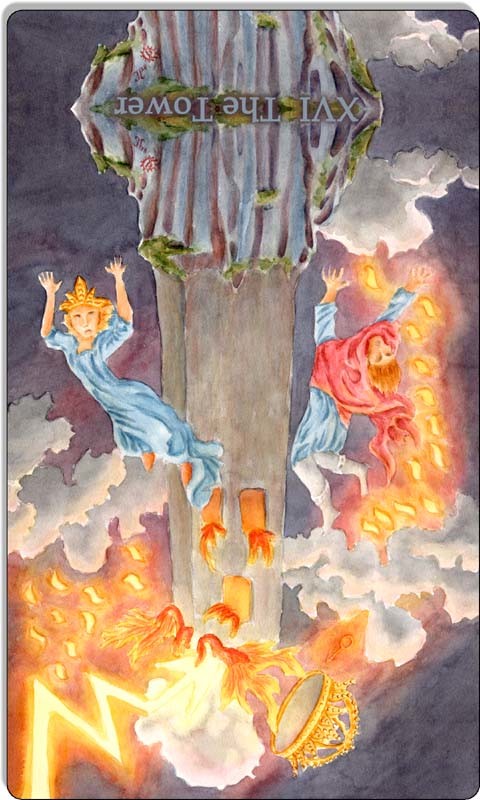 In The Tower reversed, like other cards, we see the reversal manifesting in one of a few ways. In general, the crisis is usually lessened in the reversal than in the upright. The situation could still be very bad, but the reversal indicates that there are usually mitigating factors, or other things that delay the sudden explosive change that the upright Tower card indicates. First of all, it could be that you managed to avoid the crisis point, or get out of harm's way, or avert disaster, however, that may not be the end of your difficulties. If you know the situation will still be ongoing and you've managed to do just enough to have the crisis averted for the time being, rest assured that unless you actually address the underlying causes of the issue, it will come back again, and you may not be so lucky next time.

On the other hand, it could be that the disastrous state that you are living in has been going on for so long, that you have become adept at "managing" crisis, and you are just constantly living in a state of inharmonious flux that you have just learned how to survive in. This is no good either, and truthfully, at some point, it will likely rear up to be dealt with as well. You should take this as a warning sign that you have changes that you need to make. If not, the amount of stress and toll they take on your body may have negative effects on your health, psyche and well-being.