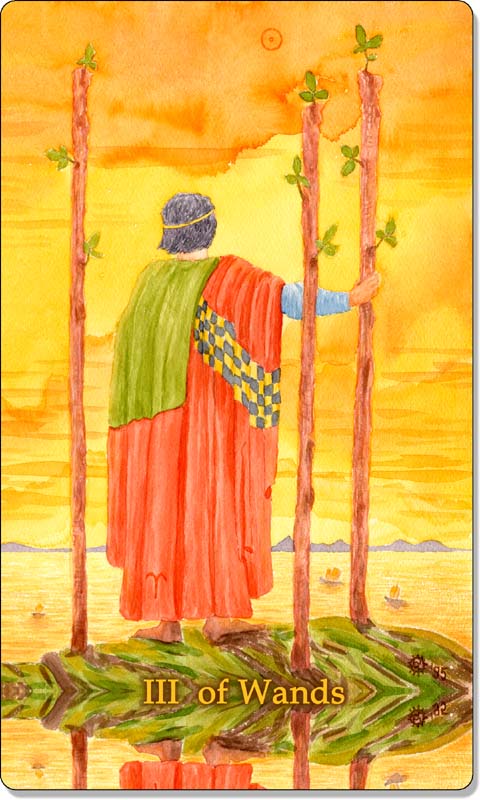 The Three of Wands is a card of travel, and this would likely be international or distant travel, or travel over water or sea, as depicted by the large expanse of water in the card. A man looks off in the distance to see the ships coming in. This card presages good things coming into your life. It signifies a good time to move forward with a project.

Three's also symbolize creativity and synthesis. In this case, you may have been collaborating on a project with others, and you are just starting to see the first wave of results. Any international endeavors would be favored at this time. Enterprise is the key word here, and you are boldly moving forward in your chosen direction. You previously had a decision to make, as to which way to go, however you have made it and are now moving full steam ahead. If there is a question as to how handle something at this point, anything having to do with forward movement, travel or new enterprise would be favored. This is a card of expansion. Change and growth are also favored. 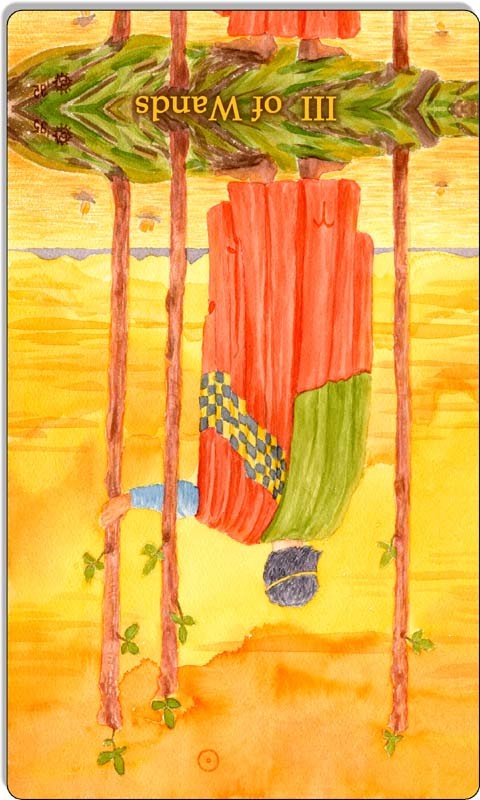 In this situation, there is difficulty and delay. You still have the desire to expand and achieve greatness; however the ability to make that happen is not as smooth sailing as in the upright. As with all reversals, you can be operating at either end of the spectrum instead of the happy middle, where we find the properties of the upright card.

At one end, you could be not doing enough. You have ideas, or fantasies, about what you would like to see happen, but as the saying goes, until a goal is advanced forward with action taken, it is just a dream. You may not know exactly where to begin, so you do nothing. You may have lots of lists, ideas and blueprints, but NO ACTIONABLE steps yet.

At the other end of the spectrum you have rash activity. You have bitten off more than you can chew and you are frantically trying to pull it together, you have implemented several plans and ideas, but now you have too many things on your plate. The advice is the same, contemplation.

You may need to return to the lesson of the card before, the Two of Wands, and reconsider your decisions and the path you wish to take. Then focus on what you can do right now, to streamline your operations. Take your vision, define it, set tangible goals, backed by action that can be broken down into smaller steps and worked on regularly. It is important to keep up with the daily responsibilities, instead of getting lost in the plans for the future.