To Reverse or Not to Reverse? 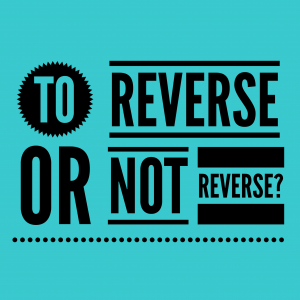 Ah yes, reversals, this is a hot topic in the world of Tarot!  When learning to read the Tarot, one of the very first questions we find ourselves asking is, "Do I read reversals, and if so, HOW??" With 78 cards and meanings that already encompass lots of "sub-meanings" each, it can be extremely daunting to think about learning 78 more!  Now hold on a minute, let's explore what it means to read reversals, or NOT read reversals.


When it comes to those who do NOT read reversals, this can be broken down into several distinctly separate categories in my opinion:


There are those who do not like to read reversals at all, because they feel that they are so negative, and do not wish to impart all of that gloom and doom on a client. This is an opinion that I can certainly sympathize with, after all, NO ONE ever wants to be the bearer of bad news, right?  However, my feeling on this school of thought, is that we don't all live in the world of unrealistic constant happiness.  If we did, it would be located somewhere in between Stepford and Pleasantville.  I know that it isn't fun to deliver potentially negative news, however it is most important that the client get an actual picture of what's really going on, and not just a sugar-coated one.


As far as that goes, not EVERYTHING has to be gloom and doom.  Did you know that there are several if not many Tarot cards whose reversed meaning either remain largely unchanged from the upright (such as the Four of Wands), or are actually BETTER in the reversed position (such as the fives)?  Not EVERY card has a more positive meaning in the upright position.


Aside from that, the idea that "reversed" means negative, is a bit of a misnomer anyway, it is an antiquated stigma that REVERSED EQUALS NEGATIVE. There are MANY ways that reversed energies manifest themselves.  They get a bad rap and while yes, some are more negative, this is not a hard and fast rule. Sometimes it means that the energy of the upright card is just blocked or stifled in some way, other times it could be that it is delayed.  The Six of Cups is a lovely card of nostalgia and childhood memories. In the reversed, it can indicate being stuck in the past, unable to move forward in the present. The Six of Swords reversed, travel delays.


It could be that the energy is "internal", working on the subconscious level or personal level, as opposed to outward manifestation. You are currently doing the work on the inside, not yet ready for the outer world. Personal development.


It can be as simple as adding the word 'Not'.  Such as in the Six of Swords reversed, NOT moving on or forward when you should be. How about the Six of Wands?  NOT achieving the status of a leader, NOT being victorious. I find these meanings of the reversed to indicate something quite different than the upright, so for me personally, I feel my readings are more accurate if I read with reversals.


Personally, I often see it as a representation of the swinging of a pendulum, whereby the reversal signifies a deviation of the norm, either one way or the other, we either have too much, or too little, of the energy of the upright card. For example in the Six of Pentacles, we have balance, giving and taking where everyone is satisfied.  In the reversed, it has deviated to one extreme.  You are either the man giving (too much, feeling taken advantage of, recognizing that you my not get your money back), or you are the poor man, not getting what you needed (a loan is denied, a grant falls through ect ect). For a more comprehensive view of the different ways a reversal can manifest, I strongly recommend Tarot Reversals by Mary K. Greer.


It could be that you are lacking or missing what is indicated in the upright of that particular card, you're going backwards or simply not moving forward. I feel this theory is best explained or exhibited by Paul Fenton-Smith.  He states that when we see a reversed card, we need to return to the lesson of the previous card, as that was not yet mastered.  I also personally apply this theory to almost all of my reversed cards.


There are also those who do not technically read with reversals, however, this is not someone who is missing 'half the information', so-to-speak.  This person will learn the entire spectrum of information that the cards mean, from the most negative to the most positive and everything in between.


Picture a sliding scale, with the aspects of the card traditionally associated with the "reversed" meanings on the left, gradually moving to the upright meaning of the card on the right.  The reader will take into account ALL of the information or ideas that the card could represent, and coupled with other external factors, such as neighboring cards, elemental dignities, and the overall feel of the spread and cards, will determine how this card is interpreted, whether it be more negatively or positively, within the normal middle range of the card, or deviated one way or another.  Like anything else in Tarot, following your gut, or intuition with this method is key.


Often, we don't get started with Reversals because with 78 cards already to learn, the idea of doubling that to 156 can seem very daunting . Sometimes we also think that's it's just unnecessary. That the 78 cards are more than enough to encompass every meaning. Personally  for me, there are many cards whose reverse meanings I truly don't find in any of the 78 Upright cards.


Why do I like to read reversals?  For starters, I feel like I am giving my client the most in depth and accurate information possible.  If there is a potentially difficult situation, I can guide the client and help him or her choose how to empower his or herself to find a resolution, rather than assuming its all going to be OK.  Or for any of the other ways they can be interpreted, I just like to have that info at the ready. From a purely practical standpoint, it takes some of the guess work out of it for me!  I don't have to think so much about whether I believe the more positive or negative attributes are being called upon, whether the energy is 'middle of the road' or 'off', the card is telling me!  That doesn't mean that I'm lazy, but that I simply prefer to work smarter not harder! With an upright card, I know that I can interpret "as usual", and when it comes up reversed, I think 'hold up, wait a minute', because I already know something isn't "business as usual" with that card!


So you're thinking about reading reversals, but you really don't want to invest all that time and memory to doubling your definitions?  Don't!  Spend a little time researching the meaning of a card upright, and then in it's reverse.  I'll let you in on a little secret… there are some simple methods you can apply to any reversed card!

*Go back to the lesson of the previous card

*Think about what would be too much, or too little of the card

So many times we think that the reverse meanings are horrible and frightening, but they don't have to be.  Mainly, again, reversed cards indicate blockages or delays, a simple deviation from the norm (like Temperance, the balance is out!), or you need to go back to the previous card and work on that.


Just like when you are learning the upright meanings, you don't wake up one day with all 78 meanings and ready to read for someone!  So true, is it with the reversals. No person is meant to learn all of the possible meanings of the cards overnight, whether there are 78, or 156.  Find a system that works for you, and work at it consistently.  There are as many ways out there, as there are Tarot cards! 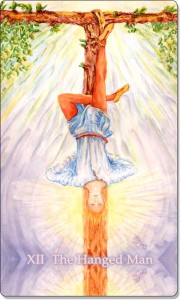 Take your time with each card.  As you're learning the upright meanings, review the reversed meaning as well.  Learn the full spectrum of meaning for each card.  You are not learning 78 additional NEW meanings.  You will see a pattern develop, that you are simply expanding on the already existing and infinite possibilities of meanings for each of the 78 cards.


Another example to illustrate that reversed does NOT equal negative. The World, The Sun, the 4 of Wands.  These cards are so wonderful that their reversed meaning doesn't really much change the meaning of the card.  They hardly can BECOME negative!  They may simply mean that you don't recognize that an opportunity is there for you to reach out and grab. In the World, you haven't QUITE reached the brass ring yet, but you're close!  Maybe that sunny day has a passing cloud? Many times when I have gotten the Sun reversed as my daily card, a beautiful day unexpectedly broke out in a thunderstorm (too little Sun temporarily), or I actually got a sunburn from too MUCH Sun! Sometimes its fun just to enjoy how LITERAL the cards can be!


How about the 5's which are all much more positive in there reversed meaning, as well as the 7 of Cups, 3 of Swords or 10 of Swords?  If I pulled any of these cards, I would much prefer them to be reversed, as this is the more favorable position in my opinion!  When you do a reading that has a reversed card, you can simply say to yourself, "OK, I may not know exactly what this means yet, but I know it's going to likely be some type of blockage or delay or deviation of the upright".  You can at least get the general gist of the card, without simply flipping it around and glossing it over, or even having to determine where it falls on the "spectrum".  Of course, as with all else in Tarot, it goes without saying, "Follow your intuition".


Do you like to use reversals?  Please tell us in the comments why or why not?  Your CHALLENGE, if you haven't given them a try yet: Do a simple spread and allow for reversals.  For any card that comes up reversed, ask yourself if this energy is blocked, or delayed, if there is too much or too little?  Ask if you think returning to the previous upright card would make sense, or finally, if you simply see this playing out internally within you, and not outwardly yet?  Please share your results in the comments below!  Did any of these ideas work for you?


Did you like this content and find it useful?  If so, please help us spread the word by spreading the (social) love! We'd LOVE it if you'd Like and Share below!  Tweetable: "Reverse a Card, Reverse Your Point of View!" 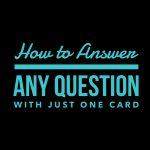 How to Answer Any Question with Just One CardBlog 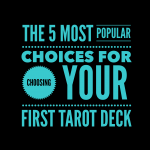 The 5 Most Popular Choices for Choosing Your First Tarot DeckBlog