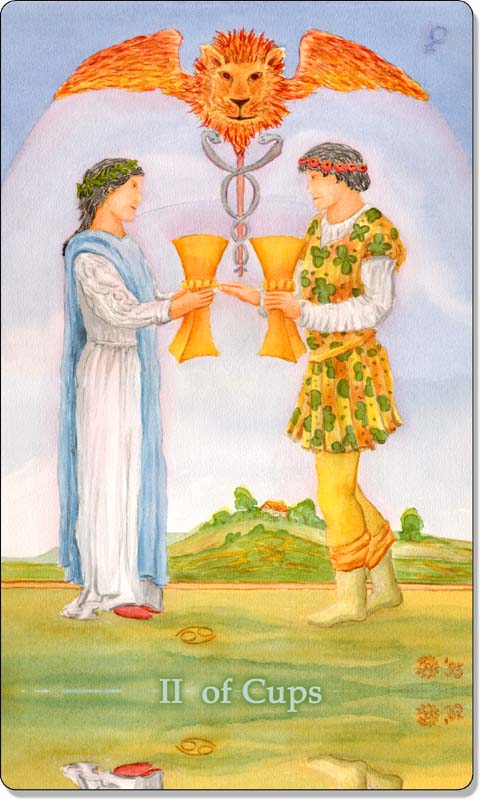 One becomes two. This card is about balanced and loving relationships. Partnership at its best. The exciting new love that was found in the Ace has now blossomed into a beautiful partnership in the two. You could be asked to take things to the next step, if you are happily dating your beloved, you may be asked to make it more serious by committing only to each other, or even further, you could receive a marriage proposal.

This is the type of love that romantic stories are written of. You show kindness and compassion to each other, deep love and mutual respect, you feel like soul mates, or as if the two of you are truly meant to be together.

All happy, beneficial, and balanced partnerships, romantic or otherwise, are favored when this card shows up. As a card of advice, this card is advising you to take actions that will ultimately benefit the partnership, or to consider your partners needs or wishes before making a final decision.

The lion's head on the card represents sexuality and it is important to note, that sexual drives are greatly enhanced when they are driven by love, and encompassed in the wings of Spirit.

This card favors teamwork, in terms of partnership. It may signify that you need to work closely with another person on your chosen project. By working together, you may be able to get further than either of you would on your own.

This card also features the Caduceus of Hermes, messenger god, and god of commerce and trade. The rod was used to separate two copulating snakes and ultimately transformed the user from a male to a female for 7 years, showing us the transformative powers a relationship carries. The entwined yet separated snakes are a part of the staff forever. The rod can be a phallic symbol for the masculine while the serpents represent shatki energy. It can also be seen as the spine, and pertain to chakra work.

This symbol has taken on medical and healing associations, firstly because Hermes was also the God of Alchemy therefore representing medications. It was also often confused with the Staff of Asclepius many centuries ago, and in the medical world, the two symbols have been used interchangeably. Asclepius was a Greek hero who became the god of Medicine and Healing and the physician's staff with the single snake wrapped around it was his symbol. 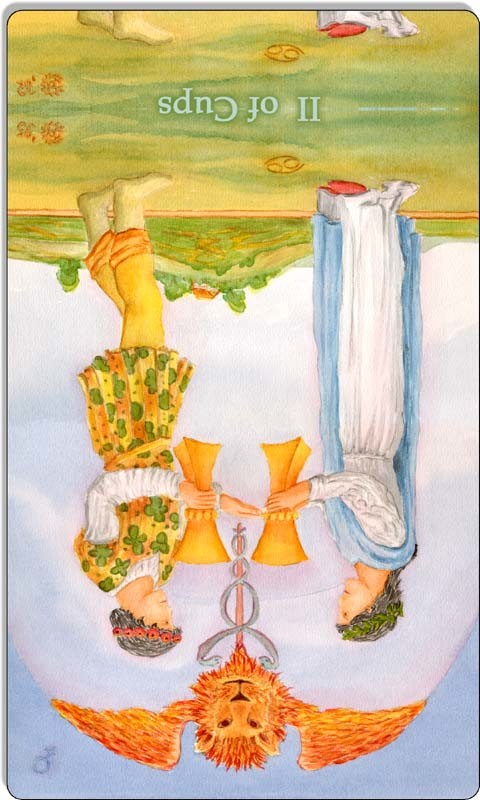 When the Two of Cups presents itself reversed, there are a myriad number of reasons. First and foremost in almost all cases, there is a disruption in the balance of the relationship. Twos confer balance, duality and partnership. Reversed, these are no longer applicable.

This can be a relationship of extremes, whereas one day things are great, and the next day there is discord. The reversed two can indicate that there is problem between the two of you, possibly you see things differently, or cannot find common ground to agree on, even for the sake of "agreeing to disagree."

This card could indicate that you are going through a breakup, or that the relationship is headed for a breakup. Or it could simply mean that you have a difference that may not lead to an all out break up, but enough to cause a rift, or a temporary divide between you. It could be a fight. This card can show up as a power struggle, a common manifestation of a relationship that is out of balance.

There could be jealousy, distrust or possibly unfaithfulness, such as a secret affair, although I would look for other cards to indicate that as well. There could be a sexual incompatibility, or a period of cooling of passions.

This can indicate love that may have started out with romance, courtship and partnering, but has degraded into something not just unfulfilling, but potentially damaging, such as a co-dependent relationship, where you know at a deep level that it just isn't working, but you can't let go.

Again, we need to keep our own love tank filled, ask yourself what you are TRULY gaining from the partnership at this point. Often, it's a fear of some sort that prevents us from moving on. Fear of having to go it alone, of not knowing what to do with yourself when you ARE alone, not wanting to think about your partner with someone else, not being able to recognize that things have degraded into a state where you are unhappy a large majority of the time with your partner, but think that you don't want to be without him or her. This can be a volatile pattern, as the feelings of jealousy and distrust are usually present in this situation which can be very hard to recover from. You could be in a relationship with someone who is genuinely not good for you.

Perhaps your heart is closed. You could be closing yourself off to someone who would like a relationship with you, or if in one, refusing to go deeper, due to a fear of getting hurt. Maybe you don't want to make a commitment, as you would still prefer to "play the field".

Alternatively, this card could be advising you that it is time to split, or go your separate way from someone, as you may have already gained all that was offered in this relationship. All relationships we partake in are meant to serve us for a reason, a season or lifetime. It is our job to figure out which ones fall where!

This could be a time of being star-crossed. It could be that the timing is not right, there could be obstacles at this time for one or both of you, you may attempt to get together now, but go nowhere for the time being. This could simply indicate unrequited love, the person you are interested in, does not view things the way you do. As Hermes is featured on this card, it could indicate giving or receiving mixed messages or a failure to communicate.