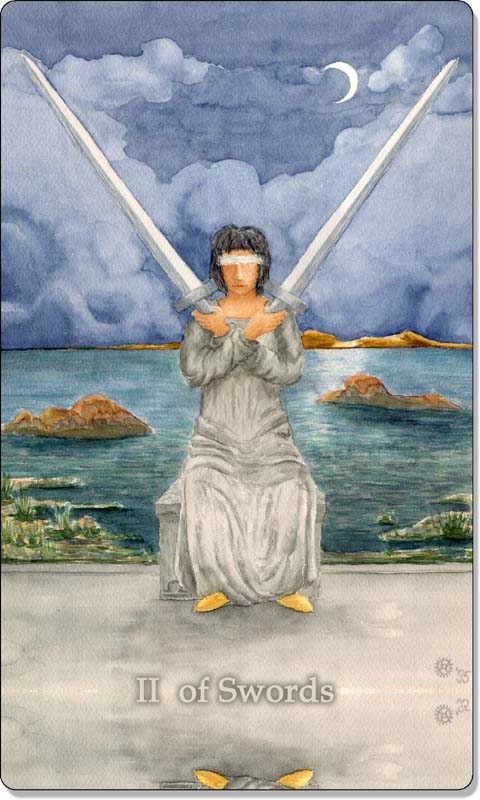 In the Two of Swords we see a woman sitting on a small bench in front of a body of water. Most notable, she is holding two swords in front of her with her arms crossed and she is blindfolded. Two's embody the element of choice, and in the Suit of Swords, one has come to a crossroads where there is a choice of some sort to make, but unfortunately, that decision is not easy.

First of all, in reality, swords are quite heavy. Imagine if you were sitting and holding two swords in such a way, leaning their weight outward, the pressure on your arms, how difficult that would become! This is a metaphor for the difficulty of the decision you are facing. It can become so burdensome and feel so painfully heavy. She is also blindfolded, indicating not only that she has no idea what to do or which way to go, but also, that she may not even want to look. The blindfolded has been self-applied and could be removed anytime. Sometimes when something is so difficult, we don't even want to face it, like the old adage about an ostrich burying it's head in the sand. The same is true of the crossed swords. She isn't just holding them in defense, she has her arms crossed in front of her, symbolic of being closed off and blocking things, or others out.

The rising moon, a prominent feature in this card, is in its waxing crescent phase. This is the first phase of the moon, after the New Moon (the seed that was planted represented by the Ace) and before the first crisis we will encounter at the 1st Quarter Moon (the anguish of the 3 of Swords). Use this time wisely to choose options that will help you continue to grow whatever you have started.

Interestingly, the Golden Dawn keyword assigned to this card is "Peace", and if we look closely at the woman's face, that appears to be true. So it is possible that you could simply be patiently and peacefully weighing your options. This card is also associated with the sign of Libra, implying fairness, and balance, as she appears to be holding the swords evenly quite adequately in the upright card. As a card of advice, given these associations, one might say that you are peacefully and carefully taking the time to weigh your options, looking for the right solution that will keep the balance of power (a swords trait) and fairness as they should be in the situation.

In the Two of Swords you are putting off making a decision. This is ok, provided it is for the right reasons. It could be, as we already discussed, that you need to take the time to withdrawal and really think about your options. If this is the case, you should consider your options carefully, using clear and rational thought. This is not an emotional card. It may be that you need more information to make a decision. Be sure you have all of the facts before deciding. Just don't kid yourself that you are "taking necessary time" beyond what is truly needed as an excuse to escape making a difficult decision. You do not want to procrastinate only to have the decision then made for you because the situation moved on without you. Do not attempt to hide from this difficult decision, as symbolized by the blindfold. You know that it will not go away just because we pretend it is not there. In the upright, you are still in the power position and have the opportunity to choose.

If you need help with your decision, I advise looking at the cards on either side of this one. Many times, what the tips of the swords are pointing at will highlight potentials in each of your options. If you don't have cards on either sides, then this may be an opportunity to create a new spread by randomly drawing two more cards to show you what those options may each entail. If you are in a stalemate with someone, remember the keyword for this card is Peace. In any decision you make, try to keep the peace with the other person and be as fair to all parties as possible. 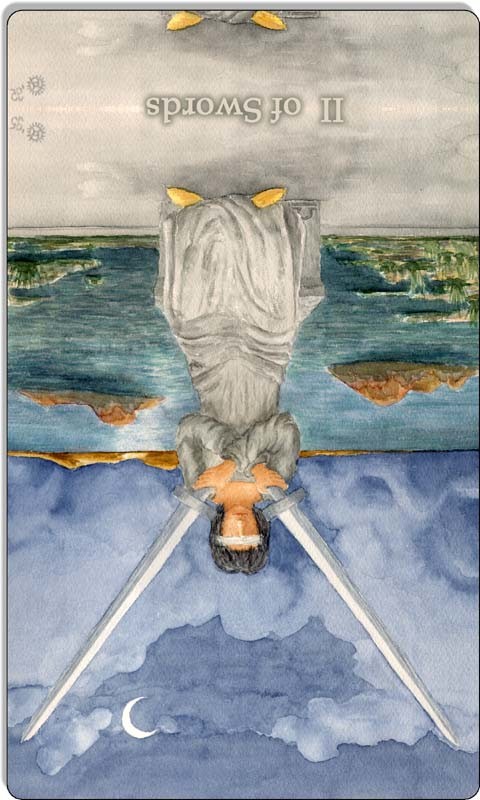 In the Two of Swords reversed you have come to an impasse and are struggling severely to make a decision. You have completely put off making a decision until you have reached the point that it is almost impossible to do so with a clear head, and possibly, with the options that you would like to have available to you. It could be that all of the options are undesirable. You are in a very difficult decision, and no matter what you choose, the outcome is going to be difficult. There is no good choice or answer. This is a card of decision making based on logic, therefore another obstacle you could be having is the amount of emotion that is wrapped up in this decision for you. This could be a situation that you are so emotionally invested in that it is impossible for you to make a clear, rational decision at this point right now, your heart just won't allow it. It could be that your head and heart are completely at odds.

You could be in a situation where someone else, or a circumstance, even a ticking clock, is pressuring you to make a decision that you are not ready to make. Maybe you need more time, more information, ect, ect, but you feel an enormous burden to make a decision quickly, and you are afraid you are going to make the wrong decision.

It could be that the decision you are making is so heavy, the outcome so long-standing, with it playing out in ways that you are unable to foresee, and you are terrified of making the wrong decision. This could be a major life choice, and you have absolutely no idea how either choice will play out, but you are going to have to choose regardless. I once heard the saying, "we can only make the best choice we can with the information we have at the time". It is always possible to make a wrong decision or that things will play out unfavorably, but sometimes we don't get a choice in how it will inevitably play out, nor do we get the option of not having to choose at all. No one said life is fair, and as fairness is a meaning associated with this card in the upright (Libra), this is another manifestation in the reverse. Sometimes its not fair to have to make a difficult choice; but we do have to, THAT is not a choice.

Additionally, we make choices based on what we know at the time, but the Universe almost always inevitably gives us other options along the way to change course or correct options as we go. Just make the best possible decision you can with the information you have now, and try to be as fair as possible. The Universe would not give you this situation if you were not able to handle it, and grow from it.

As a swords card, this is still about mental energy and power, so in the reverse, we can see that you could be mentally exhausted with trying to make this extremely difficult decision. You could be experiencing a real lack of clarity, the information you need to help you with this decision is just not available, you could be confused, and truly just don't know what to do! It could be that your decision involves multiple other people, keep in mind the Golden Dawn's keyword assignment of this card, which is "Peace". Try not to upset the balance too much, and if you are a referee in the middle, you could find it quite difficult to be the "peacekeeper"! Just do your best to be as fair as you can to all parties, make your choices based on logic, and move on! Don't let yourself be sucked into other people's problems any more than you truly need to be involved. The swords energy is swift and does NOT want to see you stagnant.

Lastly, just like in the upright card, the helpful information you may need to make your decision could be highlighted by the adjacent cards flanking the Two of Swords. Take a look at what the tips of the swords are pointing at. This can give you clues about how each option may play out. If you don't have cards on either side, then create a small spread, by drawing two more cards randomly and placing them accordingly to help you make your decision.